Ivanka: 'I have zero concern' any of us will be indicted by Mueller 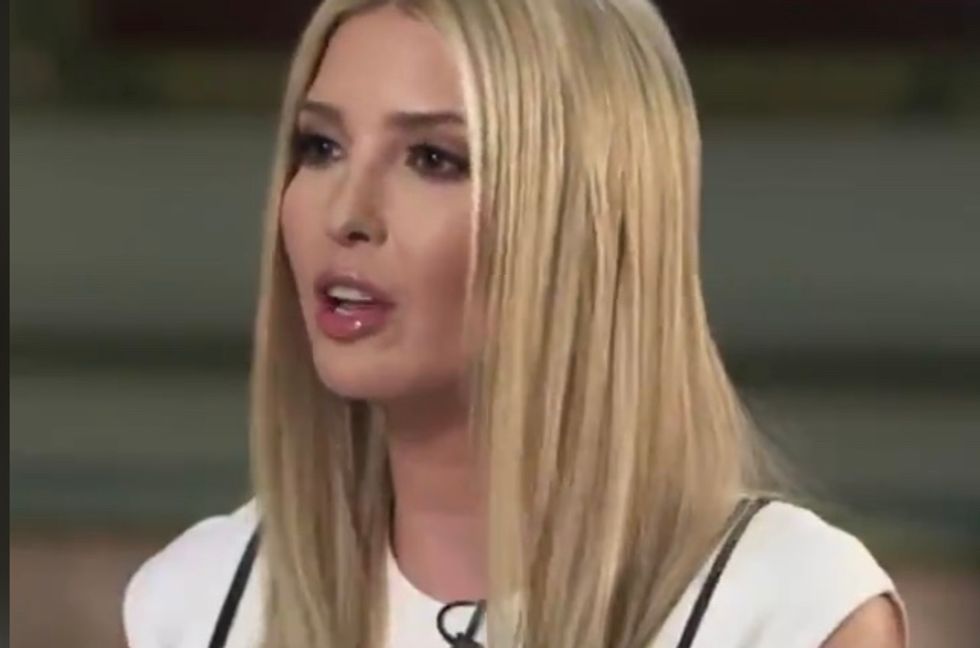 On Friday, Ivanka Trump told ABC News that she was not at all worried that special counsel Robert Mueller's investigation would result in charges against her or any members of her family stemming from attempts to conspire with Russia, or the controversial attempts to build a Trump Tower in Moscow.

"Some of the president's aides have now been charged and people are saying, look, the walls are closing in," said ABC's Abby Huntsman. "Sitting here, knowing that it is almost over, are you concerned about anyone in your life that you love being involved?"

"I'm not. I'm really not," said Ivanka. "You mentioned the Moscow example. That's a perfect example, there's nothing there. Yet it's created weeks and weeks and months of headlines. So no, I have zero concern."

Ivanka added that "It's not like it's a strange thing, as a hospitality company or a development company, to have a hotel or a property in Russia," and that she knew "almost" nothing about the project.

For all of Ivanka's downplaying, Trump Tower Moscow project has been cited as a potential motivation for why her father could have wanted his campaign to work closely with Russia in the first place. Moreover, her claim that she was barely involved is not credible, given that she reportedly had regular briefings on it, that she recommended an architect for the project, and that there were plans for it to include a spa branded with her name.

Ivanka's confidence that no one in the Trump family will be indicted may not be shared by Donald Trump Jr., who was involved in both the Moscow project and the infamous 2016 campaign meeting in Trump Tower with a lawyer linked to Russian President Vladimir Putin. In November, POLITICO reported that Trump Jr. told his friends he fears he will be charged by Mueller.

Even if Ivanka herself isn't a target of the Mueller investigation, she may have other troubles. A recent ProPublica report suggests Ivanka brokered contracts between her father's inaugural committee and the Trump Organization for food, rooms, and event space, raising concerns that she was diverting campaign money into her family's business. There is a broadening criminal investigation into how the inaugural committee's funding was spent, whether its donors' contributions were legal, and whether they sought to curry favor with the incoming administration.