'It makes me mad as hell': This teacher is furious at Betsy DeVos for twisting his story to fit her right-wing agenda 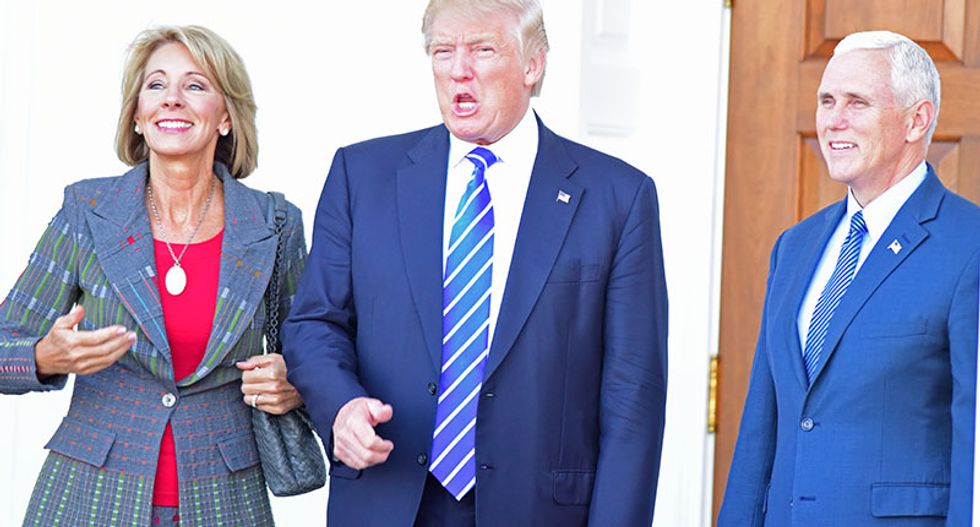 In her speeches and interviews, Betsy DeVos likes to use anecdotes about public school teachers to give the impression that her radical agenda has the support of public school teachers. She has referred to an individual named “Jed” on a number of occasions. According to DeVos, Jed was told that his class was “having too much fun”, and as a result, he left the profession.

Teachers are on the front lines, and they know how to best meet the needs of their students. Yet too often, their voices aren't heard. Last week, I met with a number of teachers who no longer teach. I wanted to understand why they aren't doing what they all professed to really love doing – teach. I heard from Matt, who was berated for not being on page 72 of the lesson plan along with everyone else, on a certain day on the calendar. And I heard from Jed, who was told to "keep it down" because his class was "too energetic" and "having too much fun."

These talented ex-teachers expressed frustration that they weren't entrusted with more responsibility, honored with more flexibility, and weren't respected as professionals who know their students and what each of them needed to learn and achieve. Their "system" mandated that teachers follow the same written and unwritten rules, rather than do what is right for students.

I come back to the same simple philosophy: those closest to the students know best.

Well, in a new HuffPost interview Jed has spoken up, and he’s not happy that Secretary Devos is using his name to further her radical anti-public school agenda.

It will come as no surprise to anyone that DeVos is not only misleading, but flat out lying about the story with Jed.

“I hate knowing she is using my words to further push her agenda, which is the antithesis of me,” said Jed Dearybury, who was a finalist for South Carolina Teacher of the Year in 2014. “Honestly, it makes me mad as hell. It makes me want to fight harder.”

Jed actually left the classroom because he wanted to be able to advocate for teachers on a larger scale. South Carolina teachers don’t have union representation, but Jed Dearybury joined the next best thing, The Palmetto State Teachers Association.

In truth, Dearybury, who spent over 13 years teaching at public elementary schools in South Carolina, didn’t leave the classroom over frustration with his district or state or federal mandates. He changed jobs so he could advocate for teachers on a larger scale, without fear of overstepping.

Not only did he not leave the classroom for the reasons DeVos cited, but he also acted in a professional manner by taking up a position that would allow him to advocate for teachers while not overstepping his role as a classroom teacher. He demonstrated professional respect for his school, his fellow teachers, and his community.

Dearbury goes on to say that he loves “...all these teachers striking across America,” and that he wishes “...every teacher in America would walk out on the same day.”

It should come as no surprise that Betsy DeVos didn’t seem to listen to Jed when he told her a story that he thought was just from a casual conversation. He didn’t think that his words would be used to push a radical, right-wing, anti-public school agenda.

The anecdote he provided in the meeting, about being told to “keep it down,” was told as an example of how even sometimes fellow teachers have overly rigid views of pedagogy. Indeed, it was another teacher ― not a school administrator ― who had reprimanded him. Two other meeting attendees have confirmed this version of events to HuffPost.

The reality here is that Betsy DeVos would be perfectly fine with shoveling poor kids into schools where they use a scripted curriculum, and have a dull learning environment.