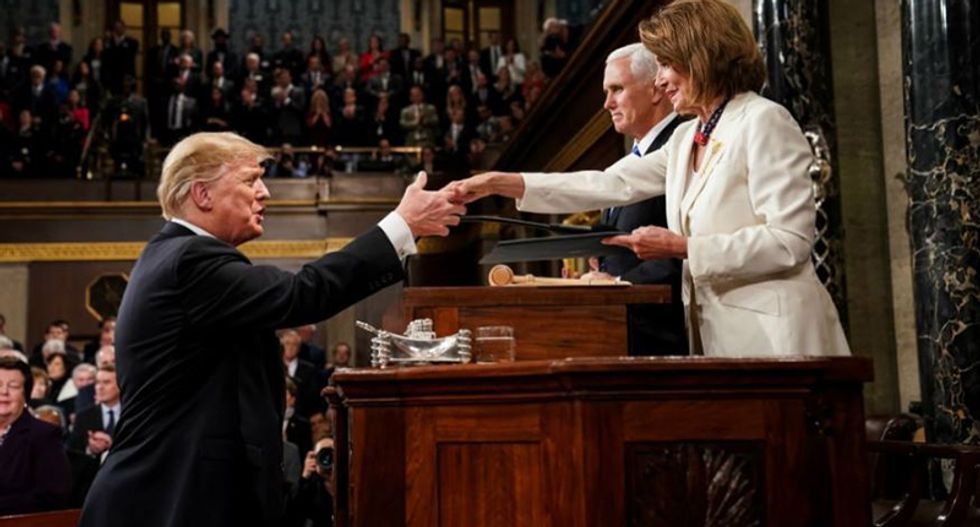 In his second State of the Union address, President Donald Trump ranged from generous to combative, eloquent to blunt. He unexpectedly complimented the wave of recently elected Democratic women in the House, and they responded by applauding for themselves. And he spent a lot of time on a his favorite topic: immigration and the border wall. We asked three scholars to choose what they saw as key quotes and add context to the president’s speech.

Refugees now and refugees in history

“The lawless state of our Southern Border is a threat to the safety, security and financial well-being of all Americans.”

The president framed the status of our southern border as “a moral issue.”

The problem is that his claim of morality flies in the face of history.

It is ironic that, later in the speech, President Trump recognized Holocaust survivors Judah Samet and Joshua Kaufman. Ironic because the international principle of accepting refugees in need arose from the events of World War II.

In June 1939, the German ocean liner St. Louis and its 937 passengers, almost all of whom were Jewish refugees, were turned away from the port of Miami.

The ship was forced to return to Europe and more than a quarter of the passengers died in the Holocaust. This was just one of the many stories of Jewish refugees being denied a haven in safe countries and subsequently dying at the hands of the Nazis.

Trump tried to turn this history on its head, arguing that Central American women and children walking thousands of miles to claim political asylum in the United States are a threat to American security and well-being.

He conflated their desperate circumstances to the atrocious crimes committed by human traffickers, drug dealers and those that prey on the innocent attempting to find a better life.

These tropes are not new; they have become standard – and repeatedly debunked – rhetorical fare from Trump.

“If there is going to be peace and legislation, there cannot be war and investigation.”

The implication of President Trump’s quote is that Congress will be unable to pass laws while investigations continue of alleged malfeasance related to him, his administration and his 2016 campaign.

However, investigations of recent presidents in U.S. history indicate that is not the case.

In 1973, in the midst of the Watergate investigations of President Richard Nixon, Congress approved and then overrode a presidential veto of the War Powers Act, a law that attempted to redefine presidential military and foreign policy powers in the modern age.

During the same period, Congress also passed the Endangered Species Act, signed by President Nixon. Scientists participated in the writing of this landmark environmental legislation, which protected animal and plant species and ecosystems from unregulated development.

July 1974 was a crucial month for the federal government. The U.S. House of Representatives Judiciary Committee voted to impeach President Nixon and the U.S. Supreme Court unanimously ruled that the president had to turn over Oval Office tape recordings subpoenaed as part of the Watergate investigation.

Something else happened that momentous month: Major legislation was passed by Congress.

The Congressional Budget and Impoundment Control Act of 1974 changed the federal budget process to give Congress more control and prevent the president from refusing to spend funds approved by Congress.

And the Legal Services Corporation Act of 1974 was passed to provide legal aid for lower income Americans.

In 1998, Congress and Independent Counsel Ken Starr were investigating allegations of perjury and obstruction of justice by President Bill Clinton.

That year, Congress approved the Children’s Online Privacy Protection Act to prevent online marketing to children and collection of information from children. The law today continues to have a significant impact in limiting social media use by children.

Congress also approved that year, and President Clinton signed, the Digital Millennium Copyright Act, which expanded U.S. copyright laws into the digital world and complied with new international treaties on the issue.

So, while congressional investigations of a president, and “war” between the two branches may not make the legislative process particularly smooth, it is still possible for significant and long-lasting laws to pass.

“Simply put, walls work and walls save lives. So let’s work together, compromise, and reach a deal that will truly make America safe.”

Trump wants a “physical barrier” on the U.S.-Mexico border.

According to recent polling by Morning Consult/Politico, this is something registered voters are divided about in principle.

And it’s something they certainly do not want extracted as ransom for a functioning government. “Where walls go up, illegal crossings go way down,” Trump said.

Leave aside questions of where most illegal immigrants come from, how they arrive in the U.S., and the economic and social consequences of their presence. Forget about asking whether the president’s proposed solution would actually work.

Consider, instead, the politics of the deal President Trump wants to make.

Most importantly, he has offered Democrats nothing in return.

When Congress last seriously considered a bipartisan deal on immigration in January 2018, the Democrats’ price was permanent legal status for “Dreamers,” or children who were brought to the U.S. illegally as children.

Trump refused that deal, which had just under US$2 billion in wall funding attached. He refused again when Senate Minority Leader Chuck Schumer, D-NY, followed up with an offer of even more wall funding.

This January, Trump offered temporary legal status for Dreamers as a means of getting his wall funding and ending what was at that point a 29-day government shutdown. The Democrats rejected it as insufficient.

That deal now seems to be off the table. So besides the president’s word that his latest measure will freeze the Salvadorian street gang MS-13 in its tracks, it is not at all clear what the other side of this “deal” might look like for the Democrats.

The prospect of a deal that includes wall funding are even worse for Trump now than they were after he ended the last shutdown. Democrats remain both a legislative veto and an oversight threat, and they now know that if push comes to shove, Trump will fold. He has even called congressional negotiations a “waste of time.”

Aside from the usual rote appeals to bipartisanship, nothing tonight even hinted in this direction.

So if Trump wants to “get it built,” he will likely declare a national emergency as time runs out. This option is fraught with legal and political challenges, but he has entrenched himself so thoroughly that he may not see any choice.