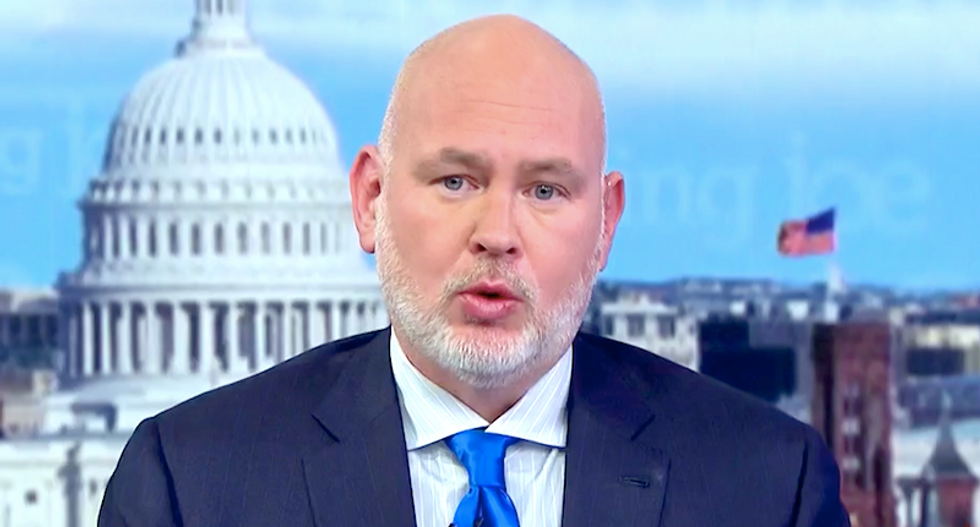 Until recently, it was easy to like Steve Schmidt. How could we not, especially given the former George W. Bush and John McCain adviser’s majestically-worded MSNBC takedowns of Donald Trump? That said, a new 2020 election poll indicates that the left’s still new-smelling affair with Schmidt is over, to put it mildly. We’ll circle back to this.

Schmidt’s authoritative panic-button rants about Trump's toxicity and the dangers of his presidency have been nothing short of legendary -- so much so that it helped many of us bury our warranted suspicions over Schmidt's role in the awfulness of the Bush-Cheney administration followed by his active participation in the frenetic rise of Sarah Palin.

Even though the proud anti-intellectualism of Bush and Palin paved the way for our current president in numerous ways -- with Schmidt played a central roles in the respective political lives of both proto-Trumps -- I was willing to accept his exclamatory all-caps NeverTrumpism as recompense for all that. I’m sure I’m not the only person toward the left who offered Schmidt a mulligan. After all, facing a crisis of this enormity, the enemy of my enemy is my friend, right? How bad could he be if he hates Trump this much?

Then along comes Howard Schultz. The latest billionaire dilettante to step into the electoral chopper blades has tripped all kinds of alarm bells on the left, given the existential stakes of the 2020 presidential election. Making matters worse, Schmidt has accepted a gig as an adviser to Schultz's incipient presidential campaign, effectively screwing every liberal who gave him the benefit of the doubt. Given his latest career move, Schmidt's NeverTrump card ought to be summarily confiscated and burned with fire.

For a few days, I took a wait-and-see approach to Schmidt’s decision. I reasoned that if Schmidt is as anti-Trump as his dozens of MSNBC monologues have suggested, then he must know something we don’t. Specifically, perhaps Schmidt has seen polling indicating that Schultz, a prospective independent candidate, would take more votes from Trump, thus damaging our criminal president’s odds of re-election. If Schultz were perceived as another nail in Trump’s political coffin, combined with the fact that Trump is already trailing the entire Democratic field by more than 10 points, it seemed possible that Schultz’s presence could release the hounds in the form of a Republican primary challenger to Trump.

A new Politico/Morning Consult poll effectively crushes any forlorn hope that Schultz and Schmidt might damage Trump’s chances for re-election in the same way Ross Perot damaged George H.W. Bush’s chances in 1992. On the contrary, the poll indicates that Democrats and NeverTrump Republicans (or former Republicans) are more likely than Republican Trump supporters to vote for a third-party candidate like Howard Schultz.

Nearly a third of Democrats in the survey, 31 percent, said they would consider a third-party candidate, compared with 25 percent of Republicans. This suggests that if Schultz is on the ballot on Election Day 2020, he’d be likely to strip more votes from the Democratic nominee than from Trump. In an era when elections are decided by a few points or less, a nudge by Schultz might well be enough to re-elect Donald Trump. Toss more Russian hacking and propaganda onto the blaze and suddenly a repeat of 2016, or worse, could be in our not-too-distant futures.

To be clear, the votes potentially going to Schultz might be pretty scant. But knowing what we know about what happened in Pennsylvania, Michigan and Wisconsin in 2016, three states that went for Trump by extremely narrow margins, a scant few votes might be all it takes to produce a second term for Trump. In Michigan, Hillary Clinton lost to Trump by around 10,700 votes -- and Green Party candidate Jill Stein picked up more than 51,000 votes in that state. Overall, if just half of Stein’s votes in Michigan, as well as Pennsylvania and Wisconsin, had gone to Clinton instead, Trump would still be a clownish reality show host today, not the president.

Schmidt, meanwhile, told MSNBC’s Nicolle Wallace that he’s working for Schultz because the former Starbucks CEO will disrupt the two-party system. His exact words were, “The hour of disruption may be at hand.” Given the tragic and grotesque reality of our current disruption president, why the hell do we need another billionaire disruptor? In fact, normals on both sides ought to be talking about ways to repair the damage from Trump’s disruption, not unleashing yet more of it. Silly me, I thought Schmidt was interested in fixing what’s broken, not adding another flame-throwing guitarist to Immortan Joe’s fleet of post-apocalyptic death machines.

The only conclusion we can draw, for now, is that the GOP operative who aided in the rise of George W. Bush and Sarah Palin, for all his bluster about his own party's failures, has ultimately chosen to help Trump sashay into a second four-year hellscape. While impeachment or resignation remain on the table as possible ways to avoid that outcome -- and, sure, a terrific Democratic ticket could generate enough momentum to overcome a three-way fracas -- why even go there? Why risk it? I guess Howard Schultz's checkbook is thicker than the Constitution or the rule of law or the stability of the republic. At least we have a clear picture of what’s happening with Schultz and Schmidt, and it’s nothing but good news for Donald Trump.