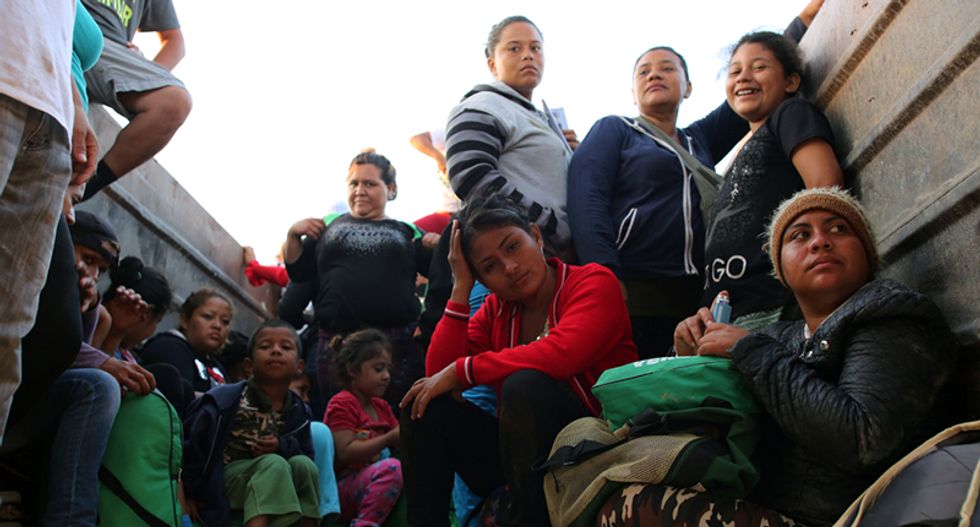 Stacey Wilson-Forsberg
and
The Conversation
February 15, 2019

This month, a caravan of nearly 1,000 Central American asylum seekers crossed Mexico’s southern border with Guatemala. They followed in the footsteps of more than 7,000 asylum seekers who passed through earlier in October.

The United States, until recently, was the northern destination of choice for Central American asylum-seekers. It was a “promised land” where they would find personal security and economic prosperity.

In contrast with those in earlier caravans, these newcomers to Mexico are unlikely to embark on the futile 4,000-kilometre journey north to the United States. Mobility to the U.S. is becoming increasingly more dangerous and the U.S.-Mexico border is more difficult to cross at both official and unofficial ports of entry.

President Andrés Manuel López Obrador directed officials at the Mexico-Guatemala border to distribute humanitarian visas to the newest caravan. The visas will allow the Central Americans to live and work in Mexican territory for one year while they navigate the country’s refugee determination process.

Central American asylum-seekers are now stranded in Mexico. The journey north has left them in a state of limbo, keeping them tacked down in a location where they did not intend to stay permanently.

The Cartagena Declaration grants protection for people whose lives are threatened by generalized violence who would not be considered refugees under the 1951 UN Refugee Convention.

In this respect, Mexico is attempting to fulfil its international obligation to refugees. However, its refugee-protection system is massively under-resourced and unprepared to handle so many asylum cases.

The art of the wait for asylum

Over the past two years, I have conducted research at one of these shelters, Albergue Tochán in southwestern Mexico City. Tochán (nuestra casa, our home in Náhuatl) houses men who have experienced violence in their country of origin or along their journey through Mexican territory.

Tochán responds to the basic needs of the men, including the provision of beds, clothing, meals and toiletries. The tall windowless structure with irregular architecture and steep stairways resembles a clean, warm, welcoming, albeit very cramped home. However, it runs over capacity with far fewer beds than guests.

While at the albergue, the men are free to come and go. They use computers equipped with internet, watch television at specified hours and they adhere to a strict schedule of household chores.

I interviewed 15 of these men over many hours while accompanying them in daily activities, and visiting with my undergraduate students.

As a researcher, I can’t help the thousands of Central Americans who are stranded in Mexico. But, I can help tell their stories. I believe stories can bring some humanity to a population that has been vilified and rendered nameless by recent political discourse.

They want to be remembered

Refugee determination procedures create many uncertainties and anxieties. Asylum-seekers often find themselves in situations of indefinite and unpredictable waiting.

Research has shown that the long wait for asylum in a host country can cause more stress and mental anguish than the events that happened before the refugee claimants went into exile.

The men at Tochán spoke about their current reality and described their daily activities, frustrations and coping mechanisms. They narrated their hopes and aspirations for the future, and they detailed the abuses they endured in the past.

The men were keen to talk — they want their stories to be documented. Many asked that they be identified in publications so that they could leave a piece of themselves behind in case they did not survive deportation back to Central America.

The men spoke about their sense of exclusion in a new territory. They worried that their asylum claims would be rejected, resulting in official and permanent eviction from Mexico.

As days become weeks, and weeks turn into months, their notions of time and space need to be continually recalibrated as the wait drags on.

Waiting defines their identity. Some of the men reported no longer knowing who they are anymore or what they are waiting for. They described feeling “useless,” “not even human,” “impotent,” “powerless,” like a “beggar” and living “half lives.”

Anxiety, uncertainty and lack of control over one’s life and future are clearly factors inherent to the collective experience of the men at Tochán.

The men have been busy.

They paint enormous colourful murals that cover virtually every surface of the albergue and throughout the surrounding neighbourhood.

With the assistance of local artists, the director of Albergue Tochán has introduced art as therapy and as a source of income. While hesitant at first, the men have gradually found ways to express and distract themselves through art while they navigate daily, weekly and monthly waiting for the legal validation of their refugee status.

Through art, asylum-seekers have been provided the opportunity to share and learn from each other.

While painting together, they find a level of comfort and unity as they learn to trust and rely on each other.

As their initial dream of reaching the United States deteriorates during the long wait at the albergue, the men learn to embrace a Mexican hope: the possibility of staying in a new location while waiting for an uncertain future.