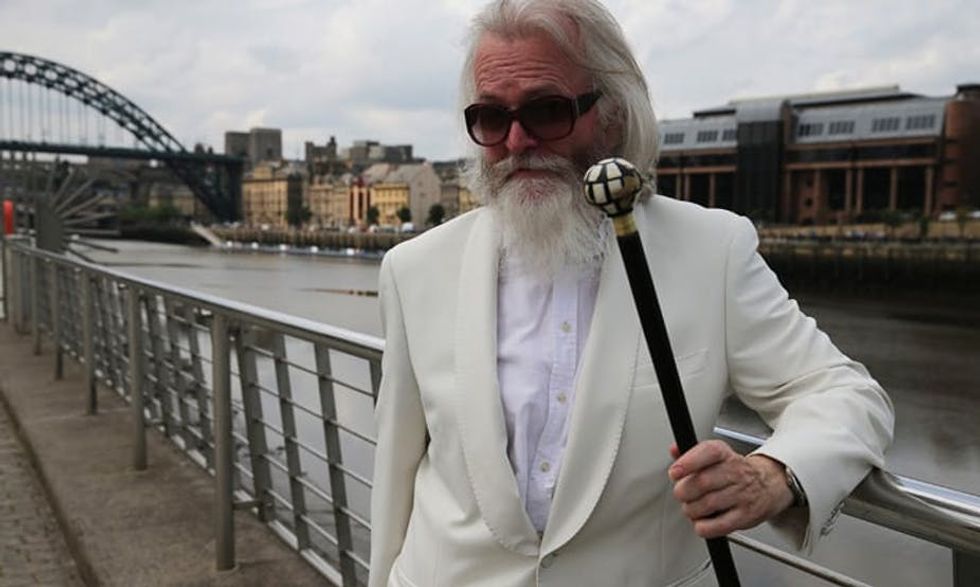 Paddy McAlloon, in his more recent guise as a pop eccentric in dress as well as attitude. PR handout
The Conversation
February 06, 2019

“Eccentricity exists particularly in the English,” the famously eccentric poet Edith Sitwell once wrote – and she should know. Sitwell in her later years required visitors to fill in a form that included the question: “Has any relative of yours ever been confined in a mental home?”, followed by the supplementary question “If not, why not?”

Tales of eccentricity in the world of music are equally common: the French avant-garde composer Erik Satie was known as much for his odd behaviour as he was for his remarkable chamber scores, and is credited with inventing “musique d’ameublement”, the forerunner to ambient music. Satie wore a white suit every day and upon his death his friends discovered multiple identical outfits in his wardrobe. Satie’s daily ritual was to saunter from his suburban home to the centre of Paris carrying an attaché case containing nothing but manuscript paper and a hammer.

In recent times, it is not the avant garde but pop musicians who have tested the boundaries of what is considered normal. Producer Phil Spector was known to wield a pistol in the studio, while Joe Meek, who wrote the groundbreaking record Telstar, recorded his hits in a converted bathroom above a shop in north London, using the sound of toilet flushes as special effects. Louis Thomas Hardin, AKA Moondog, dressed in robes and a horned helmet and was known as The Viking of 6th Avenue.

Brian Wilson, genius behind the success of the Beach Boys, suffered drug abuse and nervous breakdowns leading to over-elaborate recording sessions and erratic demands such as having his piano room filled with sand so that he could feel the beach under his feet. The unreleased Beach Boys LP Smile became a legendary symbol of Wilson’s malaise.

Dub Reggae producer Lee Scratch Perry burned his Black Ark studio to the ground in a fit of rage. To top it all, while definitely not pop, avant-Jazz orchestral composer Sun Ra is officially listed as being born on Saturn.

What we are discussing here is not the traditional bad behaviour of spoilt and egotistical celebrities. True pop eccentrics are either born that way and find an outlet in music, or are “turned crazy” by the destructive nature of the music business itself. Record companies tolerate oddballs while they are playing the game, but when artists tire of being puppets and want to deviate from the formula they are cast aside. The most infamous example of this is cult killer Charles Manson, who was wooed as a potential acid folk singer by the Beach Boys and their producer Terry Melcher (son of Doris Day) and then hastily dropped, leaving Manson wounded and resentful. He went on to murder five people.

Kings of rock and roll

One of the most fascinating modern-day pop eccentrics is Paddy McAloon, mastermind behind the music of 1980s pop band Prefab Sprout, whose work is recounted in a new three-volume study by John Birch.

The first volume, The Early Years, explains how the band emerged from the unpromising location of Witton Gilbert, a village in rural County Durham in the northeast of England. Prefab Sprout found success in the mid-1980s with hits such as When Love Breaks Down, Cars and Girls, and most famously The King of Rock’n’Roll during an epoch that saw its own share of mavericks. Music moguls with singular visions such as Tony Wilson of Factory Records or Alan McGhee of Creation Records, or Keith Armstrong of Prefab Sprout’s label Kitchenware were all larger than life characters, with Alan Horne, founder of Postcard Records in Glasgow that launched the careers of Orange Juice and Aztec Camera, and founder of 4AD Records Ivo Watts-Russell being the high priests of post-punk lunacy.

McAloon brought his own strange and diverse combination of influences to bear on his songs, mixing up US songwriter Irving Berlin, contemporary classical composer Karlheinz Stockhausen and The Beatles. He was also inspired by eccentrics from an earlier generation, in particular songwriter Jimmy Webb and jazz-rock group Steely Dan. Webb composed expansive songs about the real and imaginary landscape of North America such as By the Time I Get to Phoenix and Wichita Lineman, memorably sung by the late Glen Campbell.

From these examples McAloon learned that a pop composer could evoke occult place and time instantly, transporting a listener to a world that is alien but familiar. McAloon pays tribute to the “sorcerer of Wichita” in one of his own songs with the lines: “In words he paints a vivid scene/ Of places you have never been/ But listen and you are moved to swear/ I know that house, I’ve climbed that stair.” McAloon once told me in an interview: “I was interested in losing yourself in someone else’s world … to be enchanted. Just to be enchanted was enough.” Music like poetry becomes an expression of the unknown.

The eccentric nature of Steely Dan – core members Donald Fagen and Water Becker, who died recently – is evidenced in their obsessive, perfectionist recording techniques, auditioning eight guitarists for a solo on one of their songs (Peg), and on occasion replacing an entire backing band with another to get the right vibe. They also conjured up complex exotic visions with a cool “west coast sound” despite hailing from New Jersey and Queens, New York.

It’s clear that the pop outsider divines the world differently, regardless of their origins. Perhaps because of his humdrum background, McAloon’s songs evoke places and people from different domains – different planets, even. In an essay included with Prefab Sprout’s own lost LP Let’s Change the World with Music, McAloon reflects on this search for the “yawning caves of blue”, the fragility of pop perfection and “transcendence through music”.

“When you hear Mozart or Bach or Brian Wilson, whoever your God would be in that world, there is something beyond the flesh and blood thing, something spooky going on,” he told me (a subject I also explore in my book, Gathering of the Tribe: music and heavy conscious creation).

In the music business today, eccentricity is sorely lacking, or is manufactured through social media where posing naked or filming a moment of psychological distress becomes another tool for selling more units. Prefab Sprout had their success and the music business moved on, as it does. Now Paddy McAloon has a beard as white and long as Moondog’s. And like all eccentric masters, he continues to make music in a language constructed from its own inner rules.

Mark Goodall, Head of Film and Media, University of Bradford