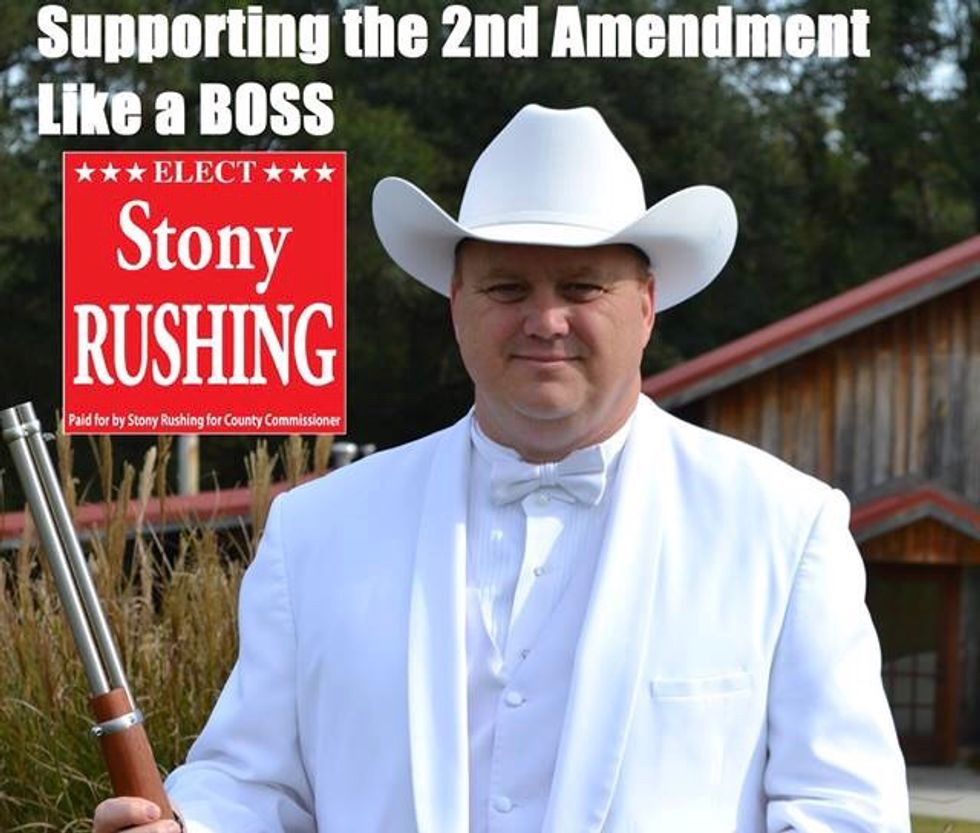 To replace him in the election, which had to be called after a months-long investigation revealed substantial evidence Harris' victory was tainted by an absentee ballot fraud scheme, Harris endorsed Stony Rushing. "His background and his experience have proven him to stand firm on so many of the issues ... including the issue of life, our national security, and religious freedom," said Harris in his announcement.

So who, exactly, is Stony Rushing?

A Union County commissioner who first served from 2002-2006 and was re-elected in 2014, Rushing owns firearms dealerships in two states and the Take Aim Training Range, a gun range affiliated with the National Rifle Association. He also teaches hunting and concealed carry classes.

Rushing has been a passionate supporter of Harris, and attended the evidentiary hearing on election fraud in the congressional race out of solidarity. He tried to spearhead a petition among county commissioners to certify Harris' victory over the state board's concerns. He has called the investigation of ballot irregularities "a political coup by the State Board and the Democrat [sic] leaders on that board," said that the Democratic candidate, Marine veteran Dan McCready, "threw all of our ballots in the trash," and demanded the Department of Justice investigate.

Perhaps the most distinctive feature of Rushing, however, is his penchant for campaigning dressed up as Boss Hogg, the corrupt local politician who was the bad guy in The Dukes of Hazzard. He has posed for multiple campaign photos with Hogg's distinctive white suit, cowboy hat, and cigar:

This is the guy Mark Harris just endorsed to be the Republican nominee in North Carolina's 9th district https://t.co/qc9bw8aRGt
— Judd Legum (@Judd Legum) 1551210318.0

North Carolina's 9th District, which was most recently represented by Republican Robert Pittenger, sits in the southern part of the state and includes parts of Charlotte. It is a very conservative district, but since President Donald Trump was elected, it has been one of the most competitive districts in the state.