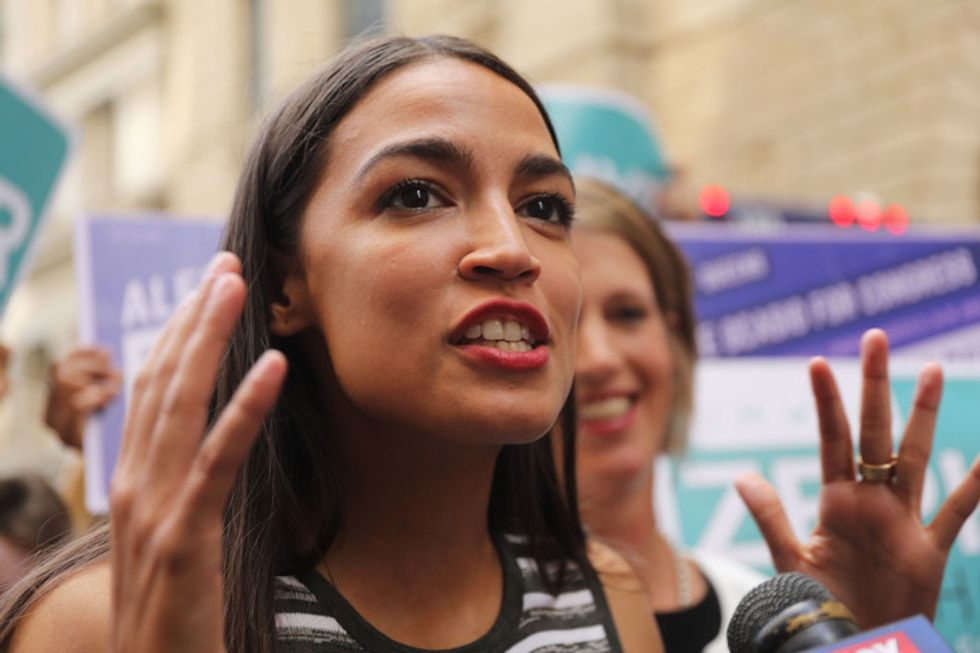 Just when one thinks that attacks on Rep. Alexandria Ocasio-Cortez from Republicans and others on the right cannot become any more idiotic, someone surprises us—and the latest culprit is author/banker John LeFevre, who attacked the 29-year-old Democratic congresswoman on Twitter for allegedly having had a low credit score and asserted that she shouldn’t be on the House Financial Services Committee because of it. Ocasio-Cortez’ past credit scores, of course, are irrelevant to how she performs in Congress; registered Democrats who voted for her in Queens and the Bronx in November could care less what Equifax, Experian or TransUnion thinks of her. But the fact that LeFevre even brought it up not only underscores his elitist, classist mentality—it also shows how silly the attacks on her have been. And Ocasio-Cortez summed it up perfectly when she tweeted, on February 8, “This stuff is really sad. The GOP is so intellectually bankrupt that they no longer engage to debate issues in good faith.”

But that was hardly the only time Ocasio-Cortez has been attacked for something that isn’t even remotely relevant. Here are some of the silliest, most pathetic attacks on the New York City congresswoman.

The same February 7 tweet in which LeFevre attacked Ocasio-Cortez for an allegedly low credit score also found him complaining that “just two months ago, she couldn’t afford an apartment in D.C.” As he saw it, anyone who found rents in the nation’s capital unaffordable is a financially illiterate deadbeat—never mind the fact that D.C. rents are so exorbitant that even former Rep. Jason Chaffetz, a far-right Utah Republican, once argued that members of Congress should receive a $2500-per- month stipend from taxpayers for rent.

Unlike Chaffetz, AOC never asked taxpayers to pay her rent; she was merely commenting on the fact that in D.C., the rent is too damn high (as Jimmy McMillan would say).

According to a 2018 study by the personal finance website SmartAsset.com, one needs to be making $108,300 to be able to afford a two-bedroom apartment in that city without being rent-stressed. But did LeFevre lambast Chaffetz for complaining about D.C.’s cost of housing? Of course not. White Utah Republicans who complain about D.C. rents get a pass from LeFevre and others on the right, but the minute a young Puerto Rican Democrat who represent areas of Queens and the Bronx brings up the subject, he finds it problematic.

2. Ocasio-Cortez attacked for dancing in college

When Sen. Ted Cruz attacked El Paso Democrat Beto O’Rourke for having played in a punk band during his youth, Ocasio-Cortez cited the attack as an example of how “corny” Republican attacks can be—and one of her own critics proved her right in early January by trying to discredit her with an old video that showed her dancing in college. But it backfired in a huge way, and the critic was ridiculed mercilessly for the attack.

“Dancegate” is a term sarcastically used to mock and ridicule those on the far right who honestly believed that a video of AOC dancing in college discredited her in some way. Conservatives with half a brain didn’t even bother to weigh in because they realized how silly it made them look. But the American Spectator’s Melissa Mackenzie couldn’t miss an opportunity to make herself look ridiculous, and on January 3, she claimed that the video of Ocasio-Cortez dancing showed just how “privileged” she really is. Mackenzie tweeted, “RE: @AOC and her dancing. She looks to me like she's having fun dancing at an elite school. She does not look like she’s oppressed. That’s the secret about Obama, AOC, Bernie, Warren and the rest who talk in terms of ‘the privileged’/’the oppressed’: They’re all privileged.”

According to Mackenzie’s “logic” or lack thereof, that video of Ocasio-Cortez dancing showed how badly she needed to check her privilege—and the sooner she checked it, the better.

RE: @AOC and her dancing. She looks to me like she's having fun dancing at an elite school. She does not look lik… https://t.co/DS9ghP1fXw
— Melissa Mackenzie (@Melissa Mackenzie)1546547897.0

4. John Cardillo tries to smear Ocasio-Cortez as spoiled and pampered

Ocasio-Cortez never claimed that she grew up in a favela in Rio de Janeiro or São Paulo or lacked access to indoor plumbing when she was growing up. Her narrative has been about upward mobility for working class families, and having a connection to both the Bronx and suburban Yorktown fits in with that narrative. But to hear Newsmax TV’s John Cardillo tell it, the Yorktown connection invalidates anything AOC has to say about class struggles.

On July 1, Cardillo visited Twitter and posted a photo of the Yorktown house in which AOC once lived, claiming it was “a far cry from the Bronx hood upbringing she’s selling.” But as Matthew Yglesias asserted in a January 4 Vox article, “The problem with accusing Ocasio-Cortez of pretending to grow up in desperate poverty in the South Bronx is that she never claimed she did.”

Cardillo also criticized AOC for attending “Ivy League Brown University,” which is incorrect; she attended Boston University. But then, this is the same John Cardillo who, in October, claimed that a series of terrorist mail bombs sent to prominent Democrats were a hoax because the packages were “just too coincidental.”

5. Ocasio-Cortez attacked for the nickname ‘Sandy’

There is a joke on the left that goes something like this: a video of Rep. Alexandria Ocasio-Cortez jaywalking in Midtown Manhattan five years ago has surfaced—we must demand her resignation at once. The point of the joke is that some of the far-right attacks on her are so amazingly dumb that it’s hard to imagine them getting any dumber. On the Gateway Pundit, far-right blogger Jim Hoft criticized AOC for using the nickname “Sandy” in the past—insisting that she wasn’t really “Alex from the Bronx” as she had jokingly called herself (AOC’s “Alex from the Bronx” line was a humorous play on Bronx native Jennifer Lopez’ 2002 hit “Jenny from the Block”).