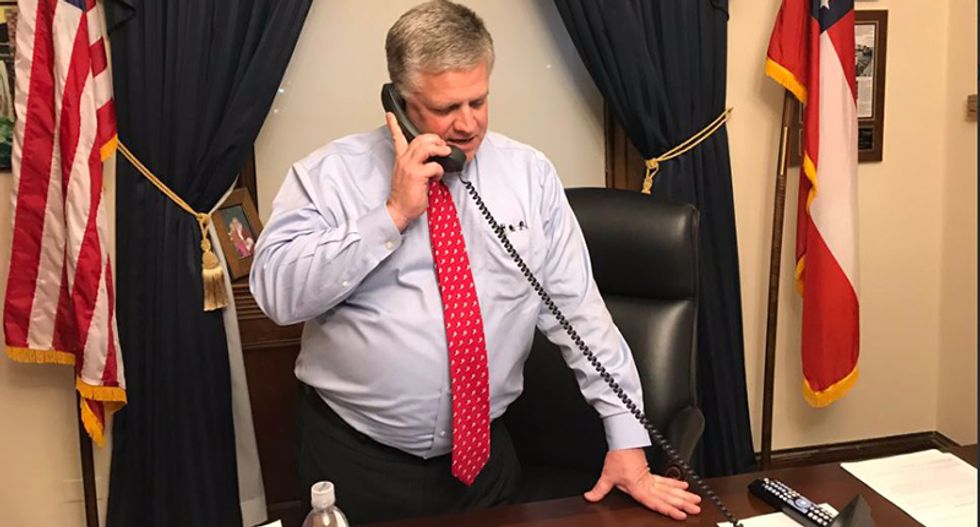 A federal labor union has asked for a formal apology from a Georgia Republican after spotting a historical book in his office that promoted Confederate ideology.

The open book displayed this passage: “The blacks are immeasurably better off here than in Africa, morally, socially, and physically. The painful discipline they are undergoing is necessary for their instruction as a race, and, I hope, will prepare and lead them to better things.”

Octavius Miller, who works with the Transportation Security Administration, said he noticed the book in a glass case in the reception area, and he was shocked by what he read as he waited to meet Ferguson.

“The fact that this passage feels that me and my ancestors of color are immeasurably better off in the United States of America being slaves than we were in Africa, that is so disrespectful,” Miller said. “My first reaction was to flip this little case upside down, and I had to think about why I was there, what I do for a living, but the disrespect and the inattention to everything that people who are colored like myself and the pigmentation of my skin had to deal with … it enraged me.”

The union members had gone to Ferguson’s office to discuss TSA workers’ rights, and Miller decided to photograph the pages because he couldn’t believe what he saw, and he later shared the photos with CNN.

Ferguson, who was a dentist before entering politics in 2016, is Miller’s congressional representative.

Shekina Givens, the union local president, asked a Ferguson staffer about the book, but the aide said he wasn’t aware of it or the passage the visitors cited, but said they also had a section of George Washington’s hair on display in the office.

A scheduling mixup ended up preventing Ferguson from meeting with the union members, and they contacted his office later to ask for an apology and seeking to have the book removed.

Ferguson’s chief of staff, Bobby Sararow, called Miller Tuesday to apologize and report the book had been removed.

“He said he wasn’t aware the book was there,” Miller said. “He apologized maybe 15 times on the phone. It seemed as if they just said what was necessary to try to mitigate the situation.”

The union still wants a public apology from the congressman himself.