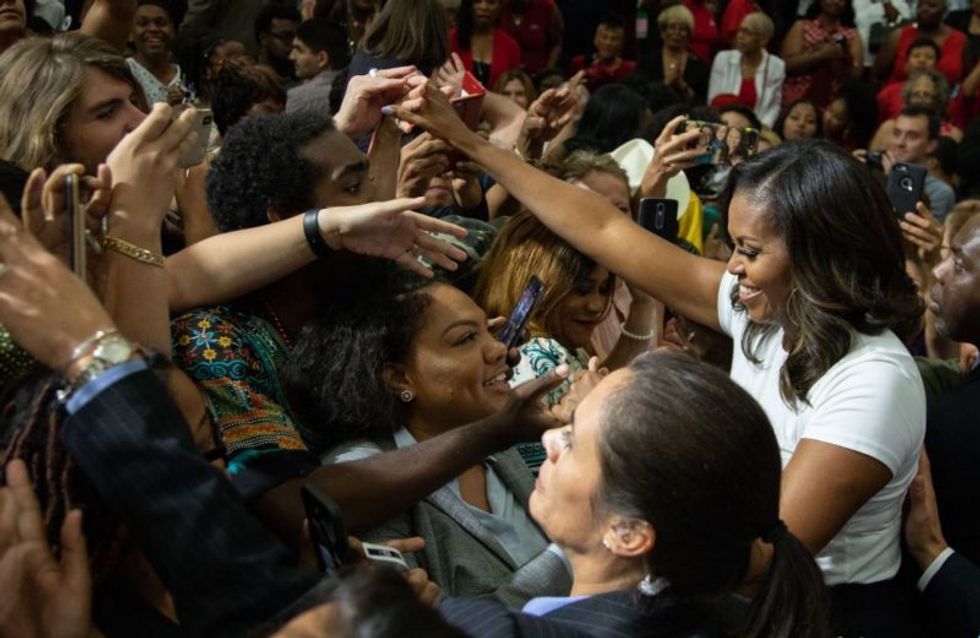 The flood was a natural disaster. Stealing from FEMA is a manmade disaster,  Taylor's fraud scheme diverted disaster benefits from our most desperate and vulnerable, those most in need of help." U.S. Attorney Mike Stuart, Department of Justice

DoJ’s  W. Virginia Southern West Virginia District, announced that Pamela Taylor, 57, the former director of the  Clay County Development Corporation had fessed up that she embezzled $18,000 of FEMA funds directed to the survivors of the “floods of 2016”. She faces 30 years in prison.

As you recall the racist attack on Obama started when she published a post on FaceBook, now deleted. The controversial post about Obama following *rump’s election was right after the 2016 election.

Taylor wrote — “It will be refreshing to have a classy, beautiful, dignified First Lady in the White House. I’m tired of seeing an Ape in heels.”

She defending herself thusly.

'My comment was not intended to be racist at all,' Whaling said in a statement to The Washington Post.

'I was referring to my day being made for change in the White House! I am truly sorry for any hard feeling this may have caused! Those who know me know that I'm not of any way racist!

'Again, I would like to apologize for this getting out of hand!'

Earlier, their comments sparked a huge furor in the small county, with many branding the post 'racist' and 'vile' and demanding that both officials stand down.

From the DoJ press release.

CHARLESTON, W.Va. –  A Clay County woman pled guilty yesterday to embezzling over $18,000 in federal FEMA disaster benefits.  The case was investigated by the United States Department of Homeland Security – Office of Inspector General (DHS-OIG) and the West Virginia Commission on Special Investigations.

Pamela Taylor, 57, admitted that she falsely registered for Federal Emergency Management Agency (FEMA) disaster benefits after the June 2016 flood in Clay County, West Virginia.  Taylor claimed that her primary residence was damaged by the flood and that she was staying in a rental unit after the flood.  In fact, her primary residence was undamaged, and she still resided there.  Due to her false statements, she received more than $18,000 in FEMA benefits to which she was not entitled.  In her plea agreement, Taylor agreed to pay restitution of $18,149.04.

“The flood was a natural disaster. Stealing from FEMA is a manmade disaster,” said United States Attorney Mike Stuart.  “The floods of June 2016 were historic and devastating to thousands of West Virginians. Lives were lost.  Too many of our brothers and sisters lost everything.  FEMA dollars are critical but limited.  Stealing critical FEMA dollars is a crime – literally and figuratively.  Taylor’s fraud scheme diverted disaster benefits from our most desperate and vulnerable, those most in need of help.  We take the solemn responsibility of ensuring FEMA dollars are used responsibly and legally.  The public can rest assured that my office takes heinous acts like stealing from disaster relief funds very seriously and will prosecute each and every case brought to us to the maximum extent of the law.”

“Taking advantage of federal funds intended for disaster relief misappropriates taxpayer dollars, reduces monies available to true victims, and erodes public confidence in relief programs,” said Special Agent in Charge Mark Tasky of  DHS-OIG.  “In July 2016, after the good people of West Virginia were devastated by severe storms, flooding, landslides, and mudslides the month prior, the Defendant knowingly submitted a fraudulent application for disaster relief, in order to enrich herself and divert critical funds away from true disaster victims.  The DHS-OIG, operating jointly with our partners in the West Virginia Commission on Special Investigations and the United States Attorney’s Office for the Southern District of West Virginia, worked tirelessly to bring the Defendant to justice for her crimes.”

Taylor faces up to 30 years in prison and a fine of up to $500,000 when she is sentenced on May 30, 2019.  United States District Court Judge the Honorable Irene C. Berger presided over the plea hearing.  Assistant United States Attorneys Stefan Hasselblad and Meredith George Thomas handled the prosecution.