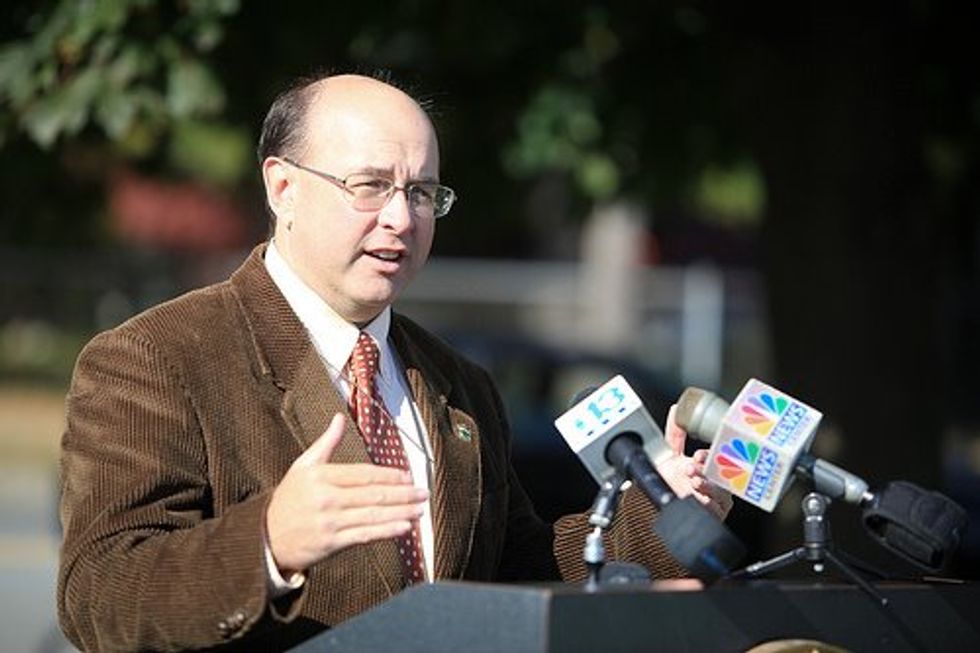 Dunlap, one of the only Democrats to serve on President Donald Trump's now-defunct "Election Integrity Commission," demanded to know why the same Republicans who have been obsessed with an imaginary epidemic of people illegally casting double ballots or noncitizen ballots are silent on the massive election fraud scandal taking place in North Carolina's 9th Congressional District.

"Here's my question: Where is the voter fraud crowd?" writes Dunlap. "You know, the folks who cry 'crime' when two people named John Smith vote in the same state? Their silence in the face of seemingly serious election fraud reveals their fundamental bad faith and hucksterism."

Studies have shown that cases of people attempting to fraudulently cast ballots in person as someone else are rarer than death by lightning strike. But Republicans have used the threat of such incidents to push duplicative ID regulations making it harder and harder for low-income and minority voters to identify themselves at the polls, which has pushed down voter turnout in states that enact them.

One of the champions of this effort has been former Kansas Secretary of State and failed gubernatorial candidate Kris Kobach, who enacted illegal voter registration purges that disenfranchised tens of thousands of lawful voters. When a federal judge forced him to explain himself, he couldn't provide any credible evidence of widespread voter fraud and lost the case so badly he was ordered to take remedial law classes.

Kobach, Dunlap writes, was similarly unable to back up his claims while co-chairing Trump's commission — and his partisanship doomed the whole enterprise.

"I had hoped to be a voice for reason and data-driven reform. Instead of cooperation, the Republican leaders of the commission excluded me entirely, while posturing that they were on the trail of massive voter fraud — maybe even big enough to explain Trump’s 2.8-million vote loss in the national popular vote. Although the commission claimed to seek the truth about voter fraud, it fought bitterly to keep its work and results secret from its own members and from the public."

Dunlap ultimately had to sue the commission in federal court to get their documents, revealing the GOP had failed to find any proof of systemic voter fraud — which ultimately led to Trump scrapping the commission altogether. Despite this, Dunlap writes, Kobach "disputed my view that voter fraud is infinitesimally rare, claiming without evidence that I was 'willfully blind' to fraud 'in front of [my] nose,' and spread baseless but dire warnings of a vast national crisis," along with former Justice Department lawyer J. Christian Adams and Heritage Foundation fellow Hans von Spakovsky.

But flash forward to now, as a multi-day hearing by the North Carolina State Board of Elections uncovers the full scope of a massive, illegal ballot mill scheme in the race for the 9th District. Witnesses say Leslie McCrae Dowless, a strategist working for Republican Mark Harris, paid harvesters to fill out and deliver other people's absentee ballots to him in Bladen and Robeson Counties, often from elderly African-American voters — and it may have been large enough to decide Harris' 905-vote victory over Democrat Dan McCready. Harris' own son, a federal prosecutor, testified on Wednesday that he warned his father Dowless was legally suspect, suggesting Harris may have lied when he denied any knowledge of the scheme.

"Now that North Carolina is investigating what could be systematic election theft, you'd think people so committed to seeing fraud where it doesn't exist would be sounding the alarm," writes Dunlap. "Yet these self-styled 'guardians of election integrity' are largely silent. Kobach says he is 'concerned,' but hasn't called for any additional action; our former commission colleague von Spakovsky is taking the dubious position that the North Carolina experience vindicates his to-date unproved claims of widespread voter fraud. Despite Trump's unfounded claims that 'millions' of people voted illegally, costing him the 2016 popular vote, the president, too, has remained silent."

The good news, says Dunlap, is that this election fraud scheme "tested North Carolina's election integrity system, including chain of custody protections and other checks and balances — and that system succeeded. After all, the discrepancy was discovered through the due diligence of election officials."

"No matter which candidate is eventually seated in the House from North Carolina, we have learned something else: We never, ever need to listen to the voter fraud charlatans again," Dunlap concludes. "They created a vivid voter fraud fantasy, conjuring up busloads of illegal immigrants or college students stealing seats from upright, patriotic Republicans and delivering them to undeserving Democrats across the nation. The truth is, the myth of voter fraud is nothing more than a ploy to justify laws that make it significantly harder for racial minorities and the poor, constituencies that often lean toward Democrats, to exercise their constitutional right to vote. The commitment to this fiction, rather than to the facts and the evidence, has left them blind to and uninterested in confronting the real fraud occurring right before our eyes."