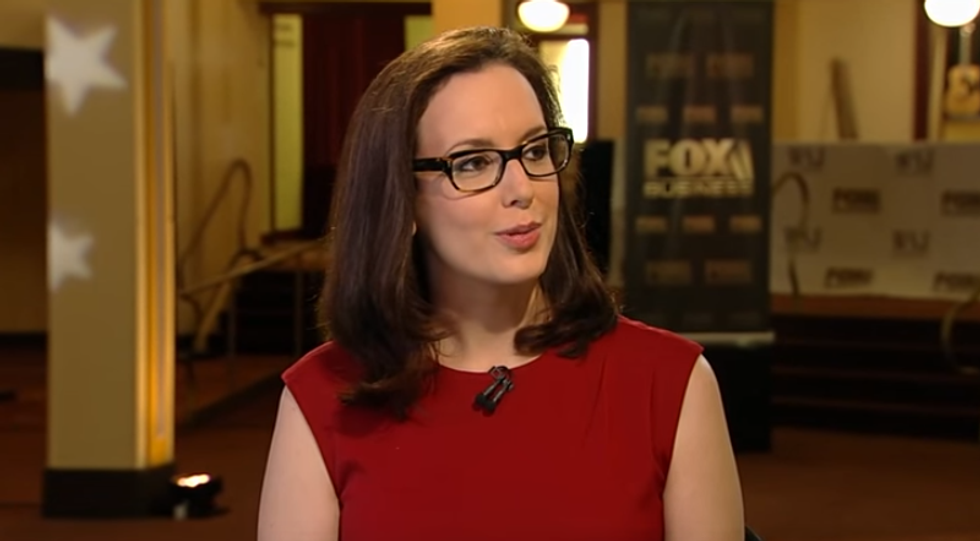 According to The Daily Beast, CNN staffers are angry and disheartened by the news that Republican strategist Sarah Isgur was hired as political editor for the network's coverage ahead of the 2020 presidential election:

The hiring was met with a negative internal reaction, especially because many CNN staffers have been largely left in the dark on the controversial decision. While other marquee hires are often announced internally, as of Tuesday afternoon the company has not circulated any guidance to staff about Isgur's new role, leading employees to wonder how much of a role she will have in day-to-day political reporting.

"It's extremely demoralizing for everyone here," one network editorial staffer told The Daily Beast.

"People are generally confused," another editorial employee said, adding that the decision to hire a partisan operative for an editorial position comes off as "very bizarre."

Isgur has previously advised several right-wing campaigns and organizations, including a Ted Cruz Senate run and Carly Fiorina's 2016 presidential campaign. She most recently served as a spokeswoman for the Justice Department under former Attorney General Jeff Sessions, a job for which the Washington Post reported she pledged her loyalty to the Trump agenda to get.

One key thing missing from her résumé, however, is any experience in journalism.

She has also been a consistently reliable right-wing partisan. Vox reported that on Twitter, she has called President Barack Obama "the new Nixon," compared abortion to gun violence, spread conspiracy theories about Planned Parenthood, lied that "92 percent of jobs lost in Obama's first term belonged to women," scoffed at the idea that climate change is a national security threat, and attacked the media for pointing out that President Donald Trump pushed Birther conspiracy theories. She has also repeatedly attacked CNN itself, calling it the "Clinton News Network" and attacking them for correctly reporting that an event hosted by a right-wing hate group is "anti-gay" and "anti-abortion."

CNN is, of course, no stranger to hiring controversial far-right personalities. The network hired Jeffrey Lord, a Trump surrogate who they had to dismiss after he tweeted a Nazi slogan, and Kayleigh McEnany, who has claimed transgender civil rights empower sexual predators.

But the difference is, these people were hired as commentators, to give their own opinions — for better or worse — in overtly political debate segments. It is extremely rare, The Daily Beast noted, for a news network to hire a political operative with no background in journalism as an editor. (CNN disputes the idea that she will steer editorial decisions, telling Vox's Aaron Rupar that Isgur "is not leading, overseeing, or running political coverage" and will simply be "helping to coordinate coverage across TV and Digital.")

The dissatisfaction by CNN staffers is a sign that the hire threatens to embarrass the network and undermine its credibility.