Beto O'Rourke rebukes Trump's lies and says El Paso is 'safe not because of walls, but in spite of walls' 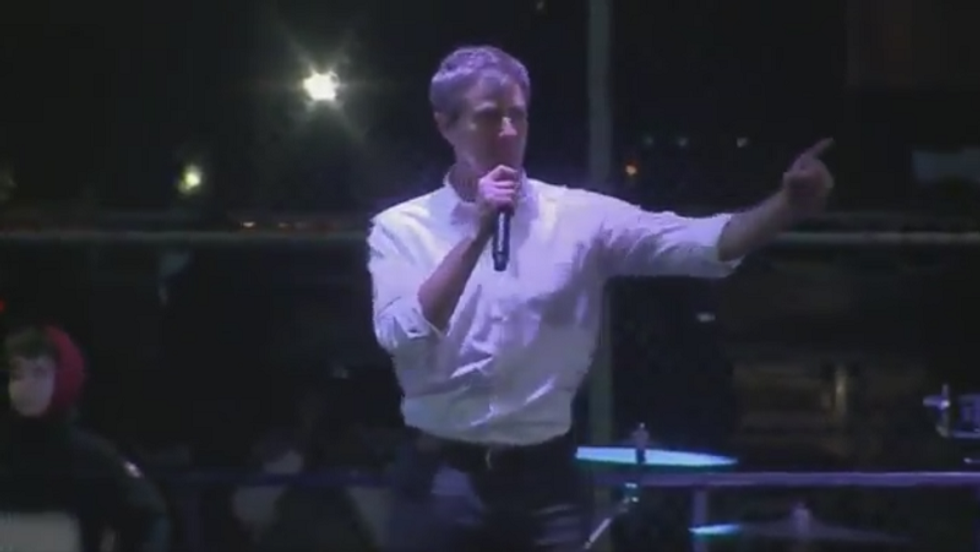 On Monday night, President Donald Trump gathered for a rally in El Paso, Texas, with his supporters. But not too far away from Trump's rally, a local El Paso icon held a counterrally to protest the divisive appearance of the president: former Democratic Rep. Beto O'Rourke.

El Paso, O'Rourke thundered, is "safe not because of walls, but in spite of walls. Secure, because we treat one another with dignity and respect."

"That is the way we make our communities and our country safe," he said to cheers.

Beto O'Rourke, staging a Trump counter-rally, says El Paso is "safe not because of walls, but in spite of walls. Securre, because we treat one another with dignity and respect. That is the way we make our communities and our country safe." Via Texas Tribune pic.twitter.com/YSdQTeKiXn

Trump has made El Paso, a border town which shares a binational metropolitan area with Ciudad Juarez in Mexico, a centerpiece of his argument for erecting a wall on the southern border. The president has claimed that El Paso used to have "extremely high rates of violent crime — one of the highest in the country" and was one of America's "most dangerous cities," but that "immediately upon its building, with a powerful barrier in place," the city's crime rate plummeted.

None of this is true. El Paso had low rates of crime for decades before a fence went up on the border — and if anything, crime went up slightly after it was built. Even the city's mayor Dee Margo, a Republican, called Trump's characterization of El Paso "misinformation" and added, "The geography of Texas won’t allow a fence from El Paso to Brownsville even if you wanted to do it."

O'Rourke ran in one of the most high-profile Senate races in 2018, narrowly losing to incumbent Republican Sen. Ted Cruz after an energetic grassroots campaign. He has said he is considering running in the 2020 presidential election and will make his decision by the end of the month.