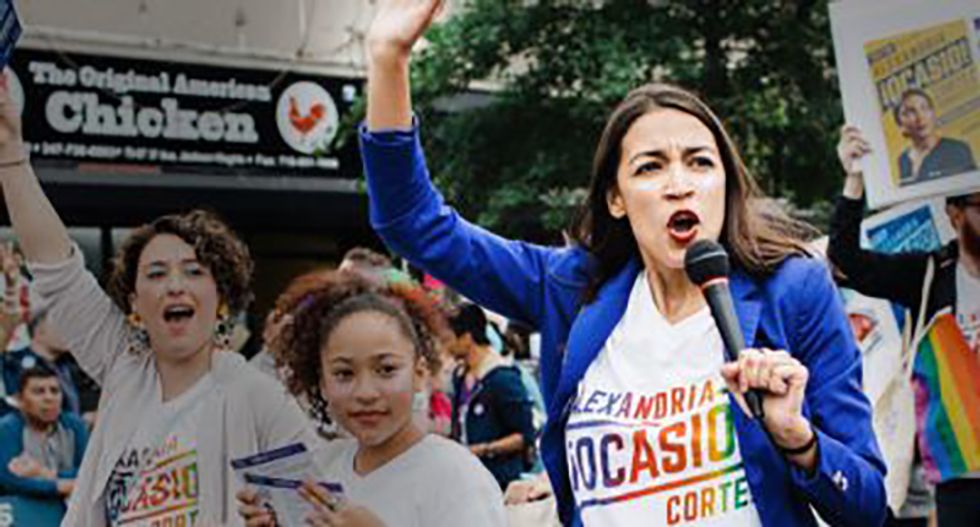 Since initial backers hailed the introduction of the historic resolution as a huge accomplishment on Thursday, a growing number of labor, economic justice, racial justice, indigenous, environmental and community organizations have lined up behind the bold proposal and vowed to pressure lawmakers to pass it. The youth-led Sunrise Movement, which has spearheaded grassroots organizing in favor of the deal, is planning more than 600 congressional office visits this week to garner support.

Thanks to the work of young people who have fought to shift political conversations about climate and the economy, Sunrise Movement co-founder and executive director Varshini Prakash said in a statement, the Green New Deal is now "on the national agenda" and endorsed by many Democrats running for president in 2020.

"The Green New Deal is now a litmus test for progressive leadership in 2019," Prakash said. "Any politician who wants to be taken seriously on climate and earn the support of young people needs to support Ocasio-Cortez and Markey's resolution."

Justice Democrats executive director Alex Rojas agreed, declaring that "Ocasio-Cortez's Green New Deal represents an earthquake in the Democratic Party and American politics where a working class Latina bartender from the Bronx is now proposing and leading the most serious solution to rewrite America's social contract and stave off climate disaster."

Capturing a sentiment often expressed by those who want to see the resolution passed, Organic Consumers Association international director Ronnie Cummins described it as "the only solution that matches the scale of our multiple crises, including global warming, corporate control of our food system, income inequality, and the general decline of our environment and our democracy."

While the resolution, as co-sponsor Sen. Bernie Sanders, I-Vt., explained in a video on Friday, is intentionally written as a broad prescription rather than detailed legislation, its demands for transforming the U.S. economy and energy system away from fossil fuels are unequivocal, as is its call to "promote justice and equity by stopping current, preventing future, and repairing historic oppression of indigenous communities, communities of color, migrant communities, deindustrialized communities, depopulated rural communities, the poor, low-income workers, women, the elderly, the unhoused, people with disabilities, and youth."

That attention to "frontline and vulnerable communities" has rallied backers such as Jennifer Epps-Addison, president and co-executive director of the Center for Popular Democracy Network.

Celebrating that the deal "helps build climate resilience in communities of color who have been most impacted by climate change, and ensures that Black and Latinx people will have direct access to good, family-supporting jobs in the new green economy," Epps-Addison declared, "now is the time to be bold and unapologetic in our demand for solutions to rampant economic insecurity and the climate crisis."

Pointing to exploding inequality and increasingly terrifying warnings from the global scientific community about the human-caused climate crisis, George Goehl of People's Action also welcomed it as a chance to "ensure that these same communities are first in line to reap the benefits of the economic opportunities harnessed by a game-changing commitment to ending all extraction and dirty energy."

May Boeve, 350.org's executive director, called it "a critical opportunity to stand up to fossil fuel billionaires while kickstarting a just transition to renewable energy and creating millions of family-sustaining jobs," and added that "for too long, we've seen legislative action fail to live up to the scale and scope of the climate crisis."

Organizers have praised Ocasio-Cortez and Markey for putting forth the Green New Deal resolution, but they also continue to emphasize that, in the words of Dream Corps president Vien Truong, "we need immediate action and bold leadership."

As Presente.org executive director Matt Nelson charged: "Families across the country deserve to live in safe communities, free from climate devastation and harmful fossil fuel production; and we deserve a Congress who is not afraid to protect our climate and all the people."