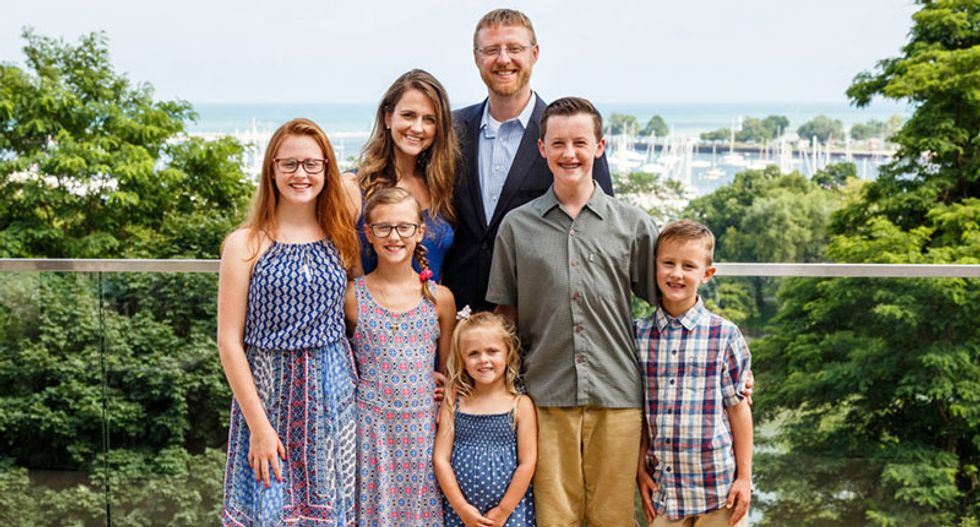 In 37 states across America state supreme court judges are elected, or appointed and then later have to run to keep their jobs. Either way, the voters get to choose, which many legal experts believe is a very bad idea, because it is.

However, in Wisconsin, hopefully it will be a good idea, just once, come April, when voters can either elect a progressive jurist or a partisan hack who authored former Governor Scott Walker's highly controversial Budget Repair Bill of 2011. You'll remember that's when Walker falsely claimed a state emergency to bust up public sector unions.

Governor Walker turned to his chief legal counsel, Brian Hagedorn, to write that union-busting bill. Hagedorn graduated from an evangelical Christian liberal arts college in 2000 and later went to Northwestern University for his law degree.

In an interview published by his alma mater, Trinity International University, Hagedorn spoke fondly of his "great spiritual growth" at the evangelical college.

“It was a great time spiritually,” Hagedorn said. “There were lots of long prayer walks, lots of time meditating in the chapel, and great relationships built around prayer and accountability.”

When he chose to study law, Hagedorn "decided to pursue this passion at the Northwestern University School of Law, where, working from a Christian worldview, he found himself seeing the legal system through a lens that was different from most of his classmates."

“The big distinction was that I understood that there was truth, and I knew where it was found,” Hagedorn said. “So I learned to apply the things I had learned at Trinity and engage and challenge my classmates with truth.”

"In 2004, he was awarded a Blackstone Fellowship, which allowed him to study at the Alliance Defense Fund in Phoenix, Arizona, before interning with Americans United for Life in Chicago. He also served as the president of the school’s Federalist Society chapter before graduating in 2006."

Although Trinity University doesn't mention it, the Alliance Defending Freedom is an anti-gay hate group, and recently behind many of the court battles in which it is hoping to gain legal protections for Christian bakers and florists so they don't have to bake cakes or arrange flowers for same-sex couples or LGBT people.

The year before he graduated from Northwestern, Hagedorn kept a blog in which he shared his legal and religious views.

The Milwaukee Journal Sentinel reports that "Hagedorn twice wrote that a landmark gay rights ruling by the U.S. Supreme Court striking down a Texas anti-sodomy law could lead to the legalization of bestiality, sex with animals, in America."

"'The idea that homosexual behavior is different than bestiality as a constitutional matter is unjustifiable,' he wrote in October 2005."

"There is no right in our Constitution to have sex with whoever or whatever you want in the privacy of your own home (or barn)," he added.

Yes, Brian Hagedorn's view is that the U.S. Supreme Court's ruling in Lawrence v. Texas, which made sex between two people of the same sex legal, was a "travesty."

He also shared his view that constitutionally, there's no difference between, for example, a same-sex couple making love, and a man raping a horse.

And Judge Hagedorn's campaign advisor says voters should elect him to the state supreme court and shouldn't worry about Hagedorn's past anti-gay hate, because, "When he put on the robe, Judge Hagedorn took an oath to be impartial and apply the law on every case, and he will always be faithful to that oath and to the people he serves."

Really? Hagedorn believes that same-sex couples having sex are constitutionally the same as a man or woman engaging in bestiality.

Hagedorn in that 2014 interview, when he was Governor Walker's chief legal counsel, also made these concerning remarks.

“My faith impacts everything I do in the workplace,” Hagedorn said, “but in that role, one of the difficult things is that I have to say ‘no’ to people, and that’s not always easy.”

Finally, especially if you're a Wisconsin voter, consider these two last points. First,  this from the Milwaukee Journal Sentinel:

Hagedorn has called Planned Parenthood "a 'wicked organization' that was more devoted 'to killing babies than to helping women.' He said his litmus test for voting in an election was a candidate's position on abortion."

Hagedorn said he had committed himself to praying and lobbying to stop abortion. He went on to say his convictions on this issue and others were given to him by God.

"The Lord has laid three fundamental passions on my heart: 1) Protecting the dignity and sanctity of human life, 2) Defending and preserving the institution of marriage, and 3) Promoting racial reconciliation in the church and culture," he wrote in November 2005.

Second, Hagedorn is running on his religion. On Facebook just two weeks ago he published a post for Religious Freedom Day:

"At its core, religious freedom assumes that all people have the right to hold convictions about the world, and to live those convictions out. Indeed, what could be more important, more essential, more foundational to human freedom, than recognizing each person’s pre-existing natural right to live in light of the purpose of our existence as each person understands it? And what, then, could be more tyrannical than a government that says you cannot?"

"As your Justice on the Wisconsin Supreme Court, I will stand up for our first freedom," he concludes.