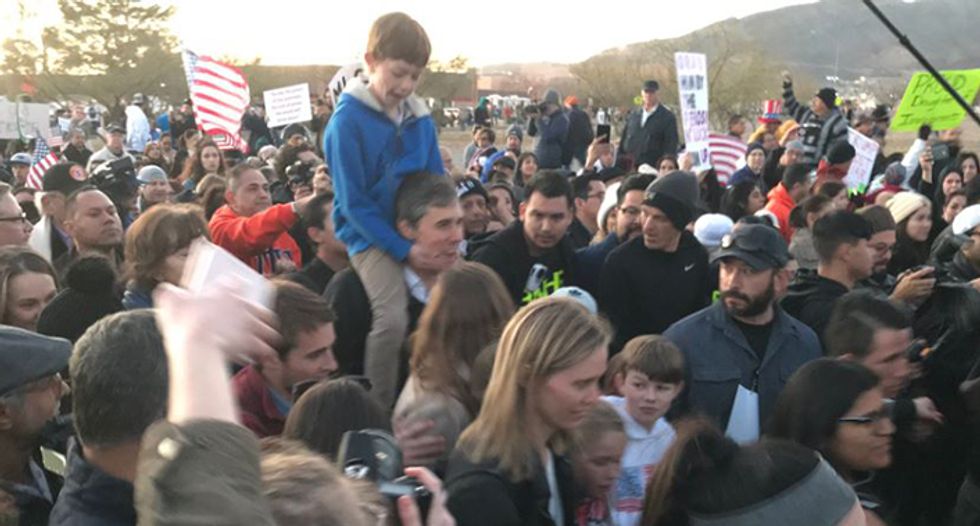 Less than a mile away from the El Paso, Texas stadium in which President Donald Trump delivered what critics described as a bigoted and lie-filled case for a wall along the U.S.-Mexico border, as many as 15,000 Texans rallied and marched Monday night in a powerful display of opposition to both the wall and the broad anti-immigrant agenda it represents.

"This is the strong and resilient border community I proudly grew up in," Cynthia Pompa, advocacy coordinator with the ACLU's Border Rights Center, said as the "March for Truth" kicked off early Monday evening. "No boots. No detention beds. No border walls. No more dollars for DHS."

Participants in #MarchForTruth chant “build bridges, not walls” as they march under freeway overpass and along the… https://t.co/eAvn3grqEg
— Rafael Carranza (@Rafael Carranza) 1549935769.0

According to Texas authorities, somewhere between 10,000 and 15,000 people gathered for the anti-Trump, anti-border wall rally across the street from the president's event, where—contrary to the president's characteristic lies—the venue could only hold 6,500 due to fire regulations.

The competing rallies came as congressional negotiators announced that they have reached an agreement in principle to keep the government open by providing over $1.3 billion for "fencing and other physical barriers" at the southern border—but no money for Trump's wall.

Calling Trump's xenophobic and falsehood-riddleddemand for a border wall as "an attack on our family and on our identity," said Rep. Veronica Escobar (D-Texas)—who spoke at the protest rally Monday night—applauded El Paso residents for reacting "with beauty" in response to "incredible cruelty from the Trump administration."

"This community has been feeding and taking care of asylum seekers for years, and has been working hard for the most vulnerable for decades and decades," Escobar said. "The rest of the country could stand to learn a lesson from the way in which the El Paso community engages with people."

Former Rep. Beto O'Rourke (D-Texas), who is considering a 2020 presidential bid, declared during a speech at the anti-Trump rally, "We know that walls do not save lives. Walls end lives."

"The eyes of the nation are on El Paso," declared the ACLU's Border Rights Center, which helped organize the counter-rally. "We're standing together to show them the truth about our border community. A border wall is not needed, there is no immigration crisis, and asylum seekers have rights."

"The only threat to our border community is Donald Trump's lies," the group continued as Trump falsely claimed that violent crime in El Paso has declined because of a fence along the border. "A border wall is a threat to our environment, our economy, and everyday lives as fronterizos. We won't let the truth go unheard during his trip to El Paso or ever."