Who should foot the bill to protect Banksy's work in public spaces? 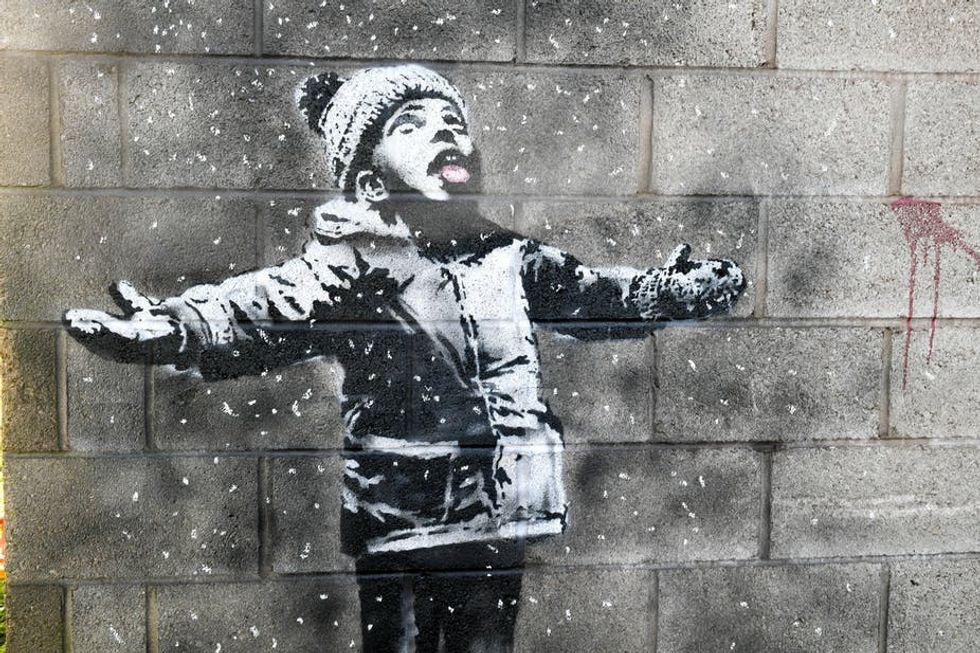 When a mural by artist Banksy appeared on a garage wall in Port Talbot, the building’s owner, Ian Lewis, had no idea just how many people would want to get a good look at it. The mural has attracted thousands of visitors and Lewis has been keen to protect it, by employing guards, and building a see-through covering over the work.

But should there even be security on a piece of graffiti? After all, the essence of graffiti is that it is temporary and subject to the possibility of being covered over with the next slogan or image. It has long been one of the means by which people can make their views known in a very public way without official sanction. It is a form of protest that visually takes up public space and asks for no endorsement and often no individual credit.

The list of graffiti artists who have gained recognition in the contemporary art world is not a long one. Shepherd Fairey, who designed the Obama “Hope” poster, and Jean Michel Basquiat are two of the most well known. Banksy himself has been quoted as saying that he never craved commercial success and that it’s actually a mark of failure for a graffiti artist.

A lofty sentiment, but whether he wants it or not, the popularity of Banksy’s work is phenomenal. The pared down stencil style coupled with often highly astute political commentary and visual puns is easy to read. It is enough to satisfy even those for whom art should consist of a “proper picture of something”.

It also lends itself very well to reproduction and copying. I actually have a mug emblazoned with Banksy style rats sitting on my desk as I write. This is what happens when an iconoclast becomes an icon. What started out as a practice that deliberately subverted the concept of art as an exclusive, costly investment, has now become just as commodified as the latest piece by Damien Hirst.

I’m personally on the fence about some of Banksy’s more recent work. I’m completely on board with the political nature of the imagery and most definitely share a lot of his ideological sentiments, but there is a degree to which he is becoming a parody of himself. For example, while it’s easy to appreciate the point he was making with the recently auctioned self-destructing drawing “Love is in the Bin”, no one could convince me that he was unaware of the effect that the action would have on his bankability.

Given he knows the impact his work can have, was it selfish of Banksy to impose this latest piece on the unsuspecting garage owner? Or was it an act of extreme philanthropy, bestowing on Port Talbot a gift that can be used either to benefit the individual or the community? He must have known that Lewis would be plagued with attention, and the inevitability of this imposed cultural responsibility must surely have at least crossed Banksy’s mind.

Public art comes in many diverse forms, from the monumental statues commemorating historical figures, to the temporary and often illegal murals created by contemporary graffiti artists. My own practice is informed by an ethos of inclusion that places the nearby community at the centre of decisions about how it is created, themed and managed.

Because of that philosophical background, I do find Banksy’s imposition of his work without regard for its effect on the local community to be irritatingly entitled. However, the issues he highlights such as the capitalist obsession with growth over sustainability, and industrial air pollution are relevant and important to a much wider community, so I appreciate that by using his fame to draw attention to them he is carrying out a form of community service.

The Welsh government has since confirmed it will be taking over security for the Port Talbot artwork, and is discussing the future of the piece. Whether by design or because he just isn’t interested in how the work is used, it’s part of Banksy’s artistic practice to leave the work to the mercy of others when it’s complete. However, it could be argued that he could have used some of his own money to help protect the work, and mitigate against any grief he’s caused the garage owner.

I’d personally like to see the work sold, and the proceeds used to address some of the social and political issues that Banksy highlights with his work. It worked for Dennis Stinchcombe who, when a mural entitled Mobile Lovers appeared on the doorway of his Bristol youth club in 2014, sold the work and used the funds to save the struggling organisation.

Whatever happens now, one thing is certain: Banksy certainly knows how to get his work in the news.

Janice Aitken, Reader in Art and Design, University of Dundee