Watch this historian call out Davos elite to their faces: 'Stop talking about philanthropy' and pay higher taxes 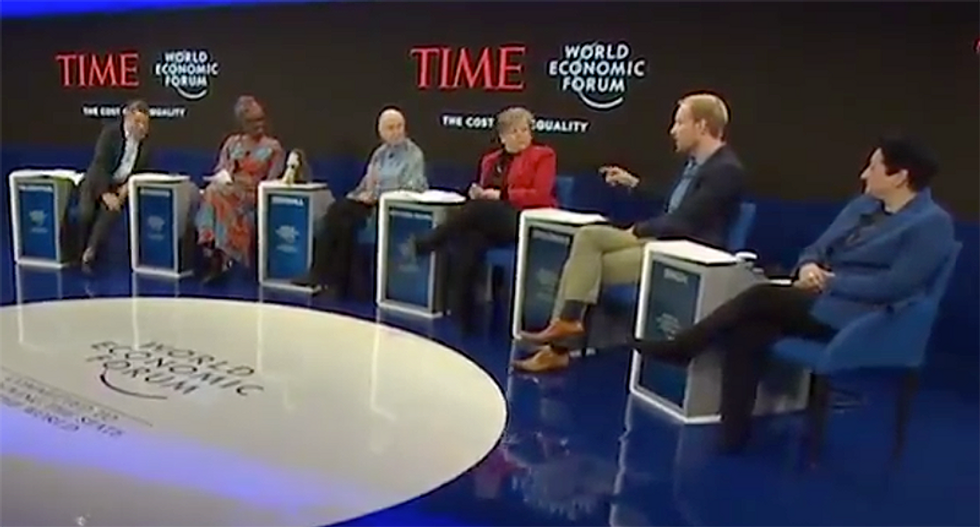 While the private jets have mostly left the airport outside of Davos, Switzerland following the conclusion of this year's World Economic Forum, a little noticed exchange that took place during the annual gathering has picked up steam in recent days showing what it looks like when some of the world's richest people are confronted by someone willing to call literal "bullshit" on the we-can-save-the-world-with-charity mantra that dominates among the global elite.

If the world's richest and most powerful are worried about a so-called popular "backlash" in response to the global economic system they defend—and largely control—Rutger Berman, a Dutch historian and author of the book Utopia for Realists, during a panel last week titled "The Cost of Inequality," said the pathway is not complicated. "The answer," he said, "is very simple: Just stop talking about philanthropy, and start talking about taxes."

"I mean we can talk for a very long time about all these stupid philanthropy schemes," Bregman added. "We can invite [U2 frontman] Bono once more. But, come on, we've got to be talking about taxes. That's it. Taxes, taxes, taxes. All the rest is bullshit in my opinion."

Watch the following clip put out by Now This:

Also on the Davos panel with Bregman was Winnie Byanyima, executive director of Oxfam International. Just last week, as the WEF summit was just opening, Oxfam released a report on global inequality showing that just 26 billionaires now own as much wealth as the world's 3.8 poorest billion people.

"We have a tax system that leaks so much, that allows $170 billion of money every year to be taken to tax havens and to be denied the developing countries that need that money most," said Byanyima during the panel. "So we have to look at the business model, and we have to look at the role of governments to tax and plow back money into people's lives."

As the video clip began to go viral in the wake of the Davos' gathering, the media team for Sen. Bernie Sanders (I-Vt.)—who has continued to put global inequality and the idea of a "rigged" economy at the heart of his political message—snagged the central claims of Bregman's remarks and on Tuesday put out this version:

We have a rigged tax code that has essentially legalized tax-dodging for large corporations and the world's wealthi… https://t.co/zHsSWmP5PL
— Bernie Sanders (@Bernie Sanders) 1548793117.0

"We have a rigged tax code that has essentially legalized tax-dodging for large corporations and the world's wealthiest individuals," said Sanders. "It is time to end these egregious loopholes and make the wealthy pay their fair share."