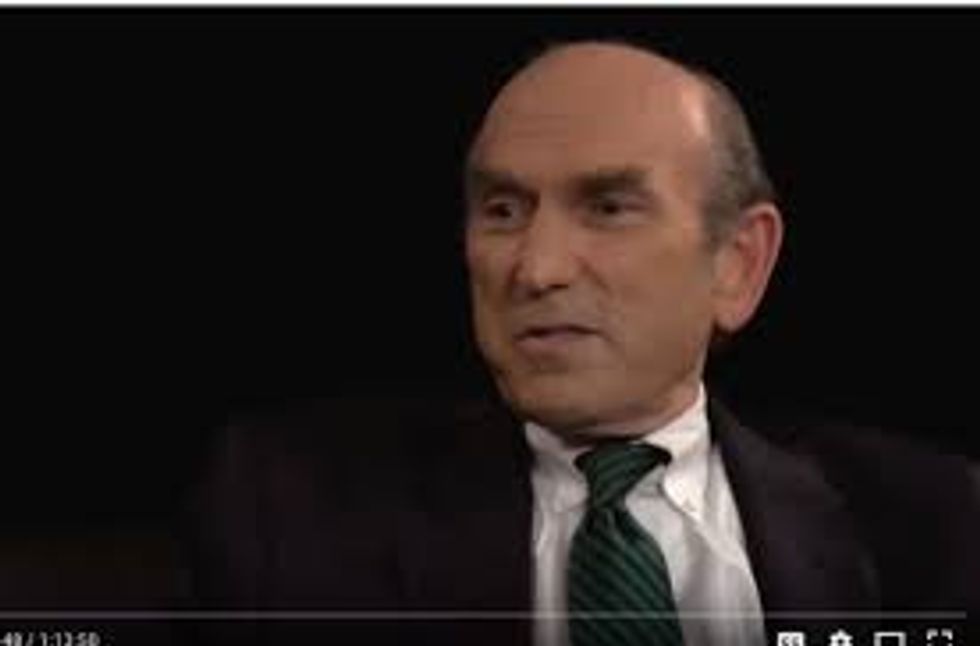 On Dec. 10, 1981, as the U.S.-trained Atlacatl Battalion arrived at the village of El Mozote in El Salvador to slaughter nearly 1,000 civilians, including children, President Ronald Reagan posed for a photo with Elliott Abrams and his parents, wife and son in honor of Human Rights Day. Then the U.S. assistant secretary of state for human rights and humanitarian affairs, Abrams was distinguished in Washington as an expert at lying in the name of freedom.

At the United Nations on Saturday, Jorge Arreaza, the Venezuelan representative, called the U.S. “the vanguard of the coup d’état” when Juan Guaidó declared himself interim president with the support of the United States. Newly appointed by the State Department as the head of the “efforts to restore democracy” in Venezuela, Abrams responded by criticizing President Nicolás Maduro: “Democracy never needs to be imposed. It is tyranny that needs to be imposed.” At least 44 people have been killed by security forces in the past week, according to activists. Abrams was previously appointed to be deputy secretary of state, but Trump nixed the idea because Abrams wrote a negative piece about Trump in 2016 titled “When You Can’t Stand Your Candidate.”

Now, Abrams stands poised to revisit a playbook of distortion that has only grown in the 30 years since he left the State Department. The 70-year-old convicted war criminal has an extensive record of lies and policy ideas that prioritize secret U.S. military involvement, particularly in Latin America. In 2002, as senior director of the National Security Council in the George W. Bush White House, Abrams encouraged an attempted coup in Venezuela against then-President Hugo Chávez.

After the massacre at El Mozote, Abrams went to great lengths to convince a Senate Committee in February 1982 that reports “were not credible”—despite photos of the dead and eyewitness testimony. He argued that the front-page stories in The New York Times and The Washington Post, written by U.S. journalists guided by Salvadoran rebels, were propaganda. “It appears to be an incident that is at least being significantly misused, at the very best, by the guerrillas,” Abrams said.

In 1991, Abrams pleaded guilty to two misdemeanor counts for lying to Congress about using money from weapons sales to Iran to fund the Contra rebels in Nicaragua. Always insisting on his innocence, he called the legal proceedings “Kafkaesque” and “abysmally stupid.” Abrams was sentenced to two years of probation and 100 community service hours, only to be pardoned by President George H.W. Bush a year later.

It’s hard to quantify the extent of the destruction that the U.S. has facilitated in Latin America. While El Mozote is considered the worst massacre in Latin American history, it is hardly the only time Abrams covered for death squads. In Honduras from 1981-85, the CIA-trained Battalion 3-16 tortured and murdered activists, students and suspected guerrillas.

“Disappearing people—murdering people, was not the policy of the United States. Nor was it our policy to avert our eyes,” Abrams later said to defend the country’s intervention.

In 1981-83, the U.S. provided military aid to Guatemala as the de facto president, Efrain Rios Montt, carried out a genocide against the indigenous Ixil Mayan people. Rios Montt, who died last year, was convicted of genocide and crimes against humanity and sentenced to 80 years in prison. But it was Abrams who argued that lifting an embargo on military aid to Guatemala would help: “The amount of killing of innocent civilians is being reduced step by step,” he said.

Investigative journalist Allan Nairn, who testified in the trial, said Abrams should be held accountable:

There would be hundreds of U.S. officials who were complicit in this and should be subpoenaed, called before a grand jury and subjected to indictment–including Elliott Abrams. And the U.S. should be ready to extradite them to Guatemala to face punishment, if the Guatemalan authorities are able to proceed with this.