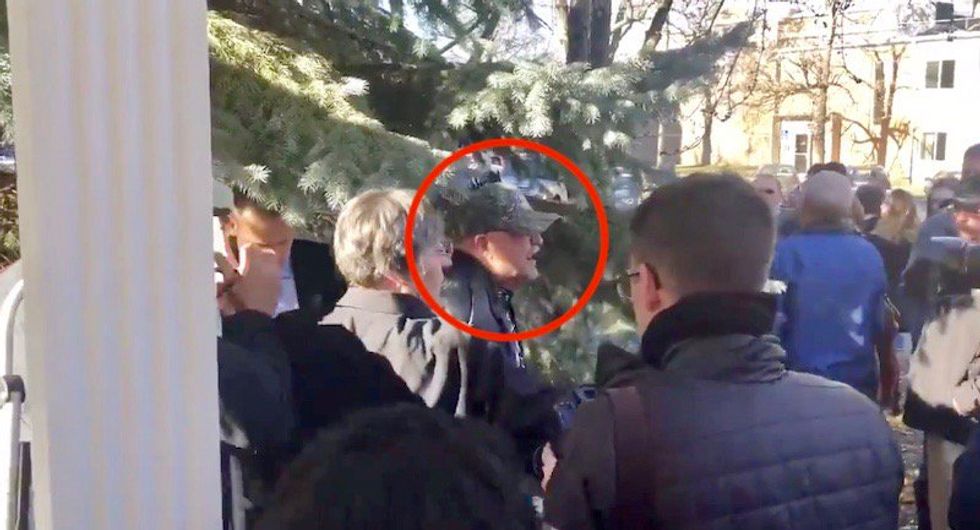 A Trump supporter allegedly attacked a supporter of Elizabeth Warren as she held an event in Iowa/Screenshot
Martin Cizmar
,
Raw Story
and
Martin Cizmar
January 06, 2019

A Trump supporter was arrested in Iowa after allegedly hitting an attendee at Elizabeth Warren's rally there, NBC News reports.

The incident happened in Storm Lake, where the Democratic Senator was campaigning for president. According to the report, a Trump supporter "unfurled a Trump banner and began yelling, which led to an altercation with other attendees."

A man attending in support fo Warren "tried to pull down the banner," and the Trump supporter allegedly struck the man him on head using a selfie stick.

Police said the man was disruptive as Warren was greeting attendees then "became aggressive and attempted to assault others in the crowd."

Police have not yet identified the alleged assailant beyond saying that he is 58-year-old Minnesota native. According to the report he was quickly handcuffed after the attack and yelled “Trump 2020!” as he was taken to a police car and driven to county jail.

Watch that video below.

Banner the man had unfurled. The man responded by trying to whack the guy w the sticks of the banner. Police/securi… https://t.co/Cp5aMbMusn
— Al Weaver (@Al Weaver)1546714790.0