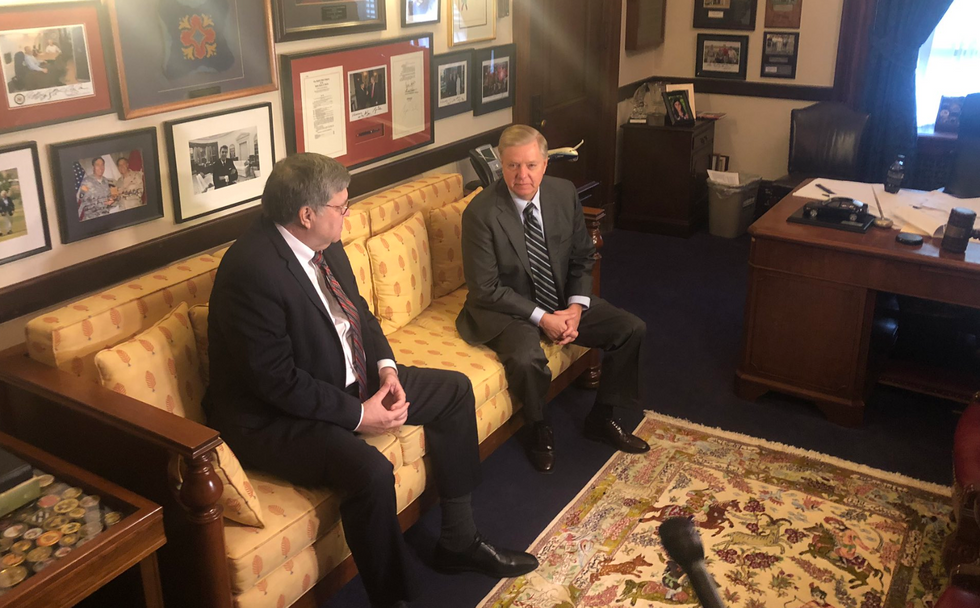 President Donald Trump's nomination of William Barr for attorney general has raised serious concerns among Senate Democrats. But the administration is doing little to allay them, because Barr isn't taking meetings with them.

According to a report in the Washington Post, the only Democrat Barr plans to meet with this week is ranking Judiciary Committee Sen. Dianne Feinstein (D-CA) on Thursday. Everyone else who has requested a meeting has been rebuffed:

Sen Richard Blumenthal (D-Conn), a member of the committee, said the administration cited the "truncated schedule" as the reason why Barr would not be available. An aide to another Democratic senator on the Judiciary Committee confirmed that the senator was similarly denied a meeting, with the administration citing the shutdown.

"William Barr's refusal to meet with Democratic senators on the Judiciary Committee is entirely unprecedented and unacceptable," Blumenthal said in a statement. "The Department of Justice's attempt to excuse this gross break in the norms by citing a 'truncated schedule' is galling when they are the ones who have rushed it. My Republican colleagues should share my outrage at this appalling violation of the Senate's independent authority."

Moreover, the idea that Barr can't meet with Democrats because of the government shutdown is more than a little suspicious as an excuse, given than Barr met with four Republican senators on Wednesday.

Barr is clearly more qualified to head the Justice Department than current acting attorney general Matthew Whitaker, having actually served as attorney general in President George H. W. Bush's administration. But there are questions about his impartiality, given that he has publicly questioned special counsel Robert Mueller's investigation of links between the Trump campaign and Russia, and called Mueller's focus on obstruction of justice "fatally misconceived." Former federal prosecutor Joyce White Vance has warned Barr could end up acting as a "wingman" for Trump.

For their part, Senate Republicans who have met with Barr, including Sens. Lindsey Graham (R-SC) and John Cornyn (R-TX) insist that Barr has promised to be impartial and has confidence in Mueller.

But as long as Barr is avoiding discussion with Senate Democrats, they will be unable to evaluate this promise and pursue their own lines of questioning. The lack of transparency and evenhandedness do not seem likely to alleviate the worries of Barr's critics — and the excuses ring hollow.