Trump claims to 'relate' to unpaid workers as he holds 800,000 federal employees hostage for border wall 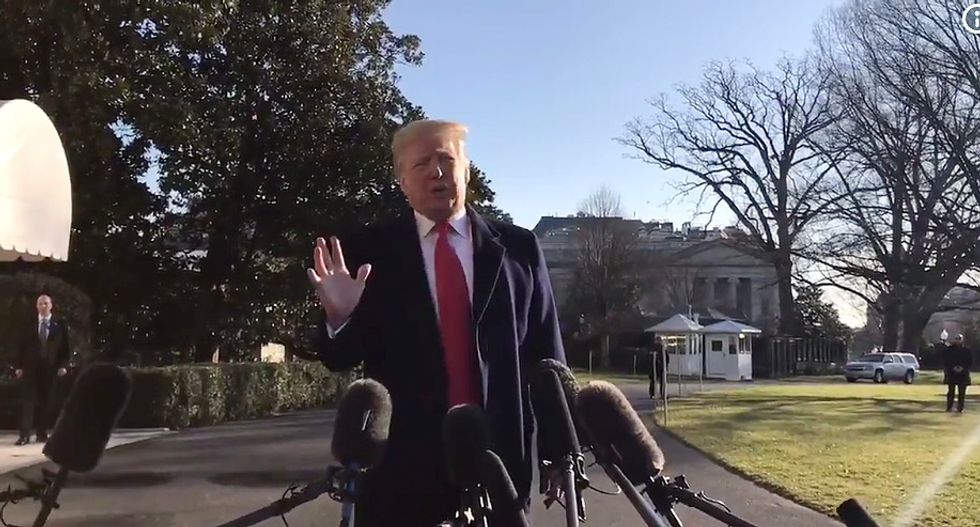 Speaking to reporters at the White House in Sunday, President Trump claimed that he can "relate" to federal workers who are working without pay during the current government shutdown.

He added that those same workers agree with the shutdown, even though they are not being paid as a result of it.

"I can relate, and I’m sure that the people that are on the receiving end will make adjustments, they always do, and they’ll make adjustments. People understand exactly what’s going on. But many of those people that won’t be receiving a paycheck, many of those people agree 100 percent with what I'm doing," said the president, in response to NBC reporter Kelly O'Donnell.

His comments echo similar claims he made on Friday, claiming that those affected directly by the shutdown support the move for a wall along the southern border with Mexico.

The President has also claimed broad support overall for his border wall, even as support for the project has slipped.

The White House switchboard and the call-in phone line to the White House are not operating due to the government shutdown, so it is unclear what calls he is referring to, of if any such calls actually occurred.

The Quinnipiac poll shows that out of 1,147 likely voters, 54% oppose the wall. This is close to the same result as a Harvard CAPS/Harris online survey that found that out of 1,407 registered voters, 56% opposed a border wall.

The president has hinted at a shutdown that could last "months or even years."

My question to the president, “Can you relate to the pain of federal workers who can’t pay their bills?” Pres. Trum… https://t.co/jcSOGCXroE
— Kelly O'Donnell (@Kelly O'Donnell) 1546786751.0