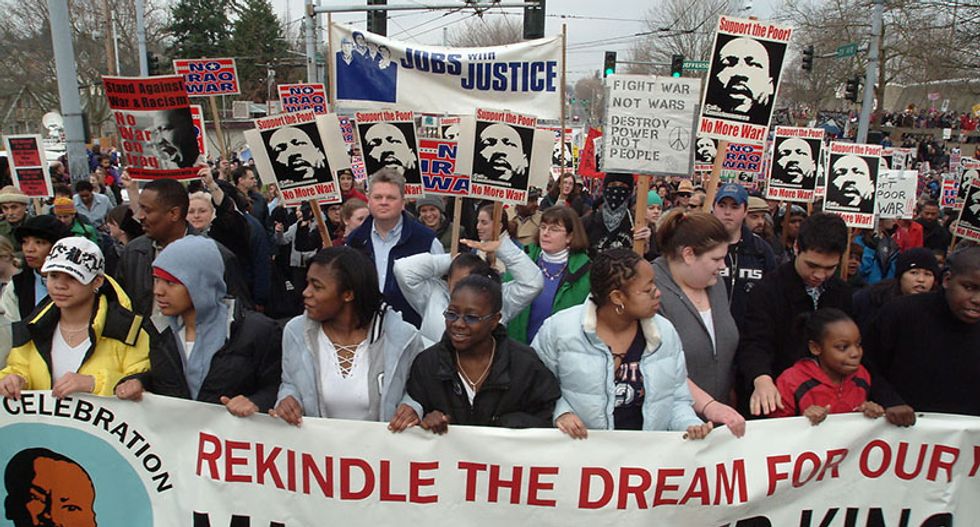 In the year leading up to his assassination, Martin Luther King Jr. became a prominent member of the movement against the Vietnam War. His April 1967 speech “Beyond Vietnam: A Time to Break the Silence” was so bold that it was condemned by 168 major newspapers and ended his working relationship with President Lyndon B. Johnson.

He could not have known the extent of the atrocities committed in the conflict. Weeks before the civil rights leader’s death, American soldiers killed hundreds of civilians at My Lai in what is now thought to be just one of many massacres during the war. King, facing public pressure to support the war, set an example for progressives by doing just the opposite.

“The March on Washington was a powerful speech,” said Georgia congressman and civil rights activist John Lewis. “It was a speech for America, but the speech he delivered in New York, on April 4, 1967, was a speech for all humanity—for the world community. I heard him speak so many times. I still think this is probably the best.”

After his Beyond Vietnam speech, King and Robert Scheer, now Truthdig’s editor in chief, spoke at a press conference together about the anti-war movement’s Vietnam Summer. The plan, according to The Harvard Crimson, had three steps: canvassing door to door, forming discussion groups to learn more about the war, and then carrying out political actions such as “pressing congressmen to hold open hearings on the war in the community or petitioning to place a statement opposing the war on the ballot in local elections.”

Today, King’s powerful anti-war legacy endures. At Time magazine, novelist Viet Thanh Nguyen endorsed King’s “ever expanding moral solidarity” and argued that the most radical part of King’s Beyond Vietnam speech was the idea that moral conviction should not be limited by race, class or nationality. That solidarity should even extend to the supposed enemy. Nguyen wrote:

In his speech, which he delivered exactly one year to the day before he was assassinated, King foresaw how the war implied something larger about the nation. It was, he said, “but a symptom of a far deeper malady within the American spirit, and if we ignore this sobering reality … we will find ourselves organizing ‘clergy and laymen concerned’ committees for the next generation … unless there is a significant and profound change in American life.”

King’s prophecy connects the war in Vietnam with our forever wars today, spread across multiple countries and continents, waged without end from global military bases numbering around 800. Some of the strategy for our forever war comes directly from lessons that the American military learned in Vietnam: drone strikes instead of mass bombing; volunteer soldiers instead of draftees; censorship of gruesome images from the battlefronts; and encouraging the reverence of soldiers.

Nguyen also told Scheer that the Vietnam War, as well as the U.S. military presence in current-day Cambodia and Laos, finally shattered illusions about the purpose of American wars: “[All] of the typical set of patterns and beliefs that Americans have always used, finally started to fall apart, started to—the contradictions within them started to be exhibited,” he said.

[Opposing the Vietnam War] was a lonely, moral stance. And it cost him. But it set an example of what is required of us if we are to honor our deepest values in times of crisis, even when silence would better serve our personal interests or the communities and causes we hold most dear. It’s what I think about when I go over the excuses and rationalizations that have kept me largely silent on one of the great moral challenges of our time: the crisis in Israel-Palestine.

Reading King’s speech at Riverside more than 50 years later, I am left with little doubt that his teachings and message require us to speak out passionately against the human rights crisis in Israel-Palestine, despite the risks and despite the complexity of the issues. King argued, when speaking of Vietnam, that even “when the issues at hand seem as perplexing as they often do in the case of this dreadful conflict,” we must not be mesmerized by uncertainty. “We must speak with all the humility that is appropriate to our limited vision, but we must speak.”