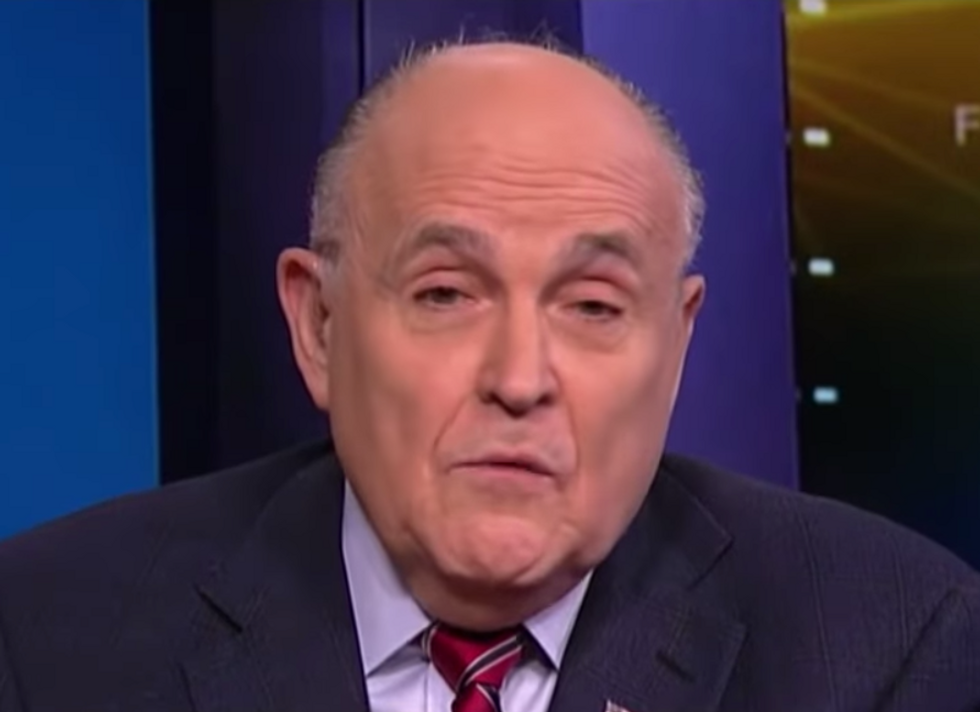 This was a very bad week for defenders of President Donald Trump's blamelessness in the Russian plot to attack the 2016 presidential election. Not only is the president facing new — and impeachment-worthy — allegations that he instructed his Michael Cohen to lie to Congress about a proposed real estate project in Moscow, his attorney Rudy Giuliani made an astonishing about-face from his months-long refrain in a CNN interview on Wednesday, now claiming that he never said there was no collusion with Russia in the Trump campaign, only that Trump himself wasn't involved in it:

This is a lie, of course. Both Giuliani and Trump have repeatedly said there was no collusion, period. Indeed, Giuliani seemed to walk back his statement later, saying he wasn't aware of any collusion by anyone else either. But Giuliani's change in strategy was not lost on former federal prosecutors Mimi Rocah and Joyce Vance in an editorial for NBC News, analyzing Giuliani's legal flip-flop.

"Let's be clear, Giuliani's conversation with Cuomo does not represent a subtle, nuanced shift in position. This is an admission by the president's lawyer that when the president said 'no collusion' and when he himself claimed there was no collusion by anyone, let alone "the top four or five people in the campaign," they were not telling the truth," write Rocah and Vance. "Of course, if the position had always been that maybe there was collusion, but Trump wasn't involved, the response to the special counsel's investigation would have been to fully cooperate. Any rational leader in this position would want to know who the bad actors were in his or her campaign. But that was not the response, because that has not been the position — until now."

Why did Giuliani essentially admit he and his boss had been lying the whole time? Rocah and Vance have a theory.

"Giuliani is technically Trump's lawyer," they write. "But the strategy he has been running since he joined the team in April 2018 is a political one, not a legal one. None of what he does is meant to convince a judge or a jury. It is meant to confuse the issues, to inoculate people against shocking news before it arrives, and to retain the president's good standing with his base. This is important because if the new Democratic House decides to file articles of impeachment against the president, Trump needs to have enough support among Republicans to ensure his majority in the Senate will hold. Giuliani has been moving the goal posts to accommodate the facts, always giving the president a retrenched argument."

This is, they write, not generally a good strategy from a legal perspective. But it might be the only one that suits Trump.

"One of the only things that Giuliani has been consistently good at is getting out ahead of bad facts before they surface in the press or in pleadings," they continue. "When there is bad news coming, Giuliani blurts it out, the public gawks, and the shock is absorbed in advance. Giuliani, with his theatrics, socializes bad news so well that by the time it drops, most people are numb to it."

"In the face of mounting evidence that there was collusion between members of the campaign and Russians, Giuliani has doubled down on his strategy of distract, shock and confuse," Rocah and Vance conclude. "But the position that he has staked out — that Trump was unaware of what others might have done — won't get him very far with anyone who is paying attention."

The obvious question then will be — is the country paying attention?