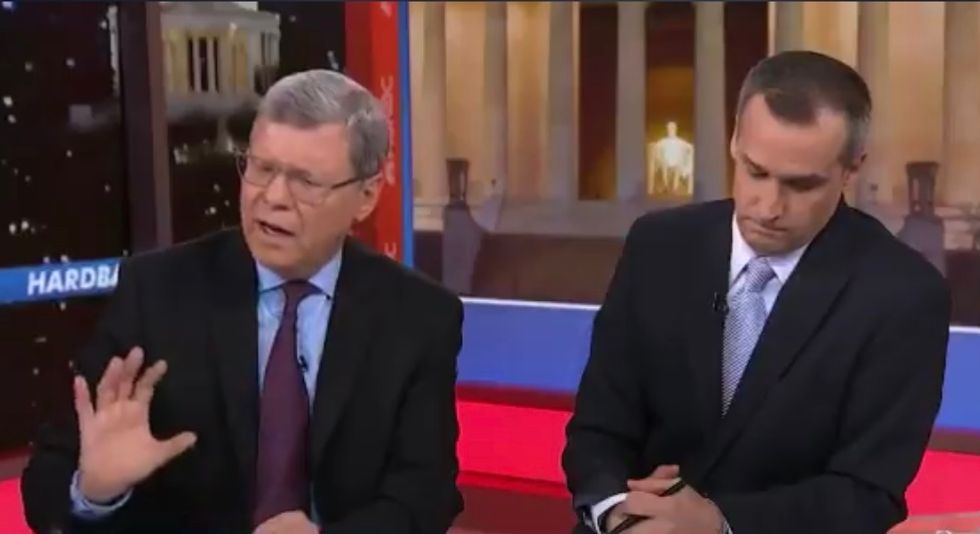 President Donald Trump's latest tactic to try to force Congress to pay for his border wall is to paint it as the only thing preventing a stampede of terrorists from getting into the country. Multiple administration officials have suggested 4,000 suspected terrorists were intercepted at the border, a ridiculous number debunked by the Department of Homeland Security's own figures.

Matthews pointed out that virtually none of the people intercepted at the border were actually accused of terrorism. "We know they weren't terrorists, because they weren't on the watch list," he said.

"These were individuals who were deported on multiple occasions—" began Lewandowski, but his fellows were having none of it.

"She made it up," said Matthews.

"She said it was an old report!" insisted Lewandowski.

"Look, this is the Vesuvius of BS that we've had to deal with here," said Sykes. "And, you know, facts are inconvenient things. The reality is that the number of arrests at the border are down dramatically from what they were in the year 2000, there were like 1.6 million, now they're down to about 310,000. Even illegal immigrants that get across the border commit crimes at a lower rate."

He continued: "But the president feels the need to create a — look, it was Rahm Emanuel who came up with the idea, right? You know, let, a crisis is a terrible thing to waste, we need to exploit it. He needs to create a sense of crisis to justify this costly boondoggle which, as I said, the more people think about it, the more, am I really going to put up a steel or concrete barrier that's going to cut millions of Americans off from the Rio Grande River? Are we seriously sitting here now, talking about the military coming in and enforcing eminent domain? Do the Republican Party really want to preside over soldiers taking away Americans' private property?"