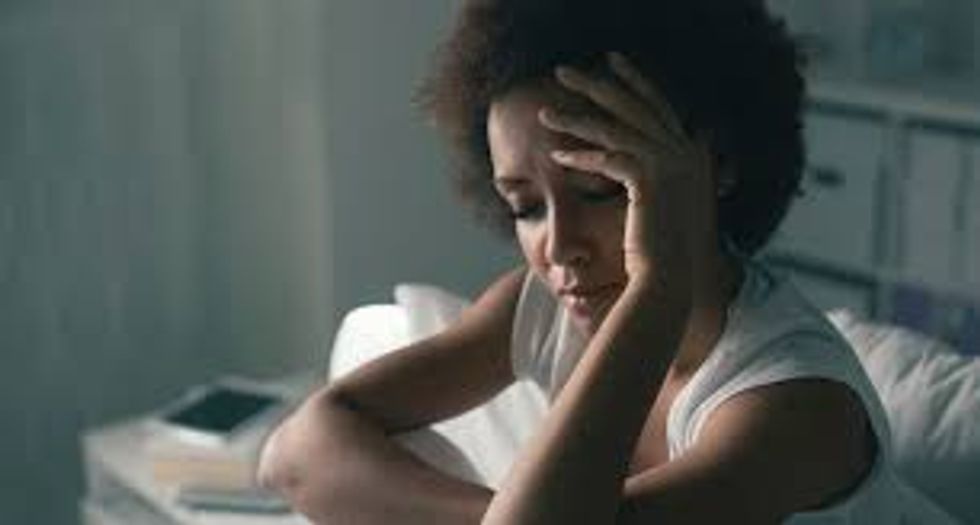 If you talk in your sleep, you’re probably unwittingly working blue, as they say. Researchers find that most people who talk in their sleep tend to utter more curse words and negative phrases than while they’re awake. It turns out that sleep-swearing and the like may actually have real benefit. A new French study suggests all that salty talk could be nature’s way of helping us prepare for the trials and tribulations of waking life.

French scientists from multiple educational, medical and speech-focused institutions recruited 232 study subjects aged 29 to 69, then observed their sleep chatter over two nights. The researchers recorded 883 “speech episodes,” the bulk of which were nonverbal: laughter, whispers, shouts and yells. But among the sizeable sample of intelligible words, they found a notable number of negative ones, particularly when compared with non-sleeping utterances.

“The most frequent word was 'no,'" study authors note, pointing out that “negations represented 21.4 percent of clauses.” Nearly 10 percent of utterances included swear words, with the f-word making an appearance at “a rate of more than 800 times than what was spoken while awake,” per Live Science. There was also a preponderance of “verbal abuse” by the somniloquists, “mostly directed toward insulting or condemning someone.” Men spoke in their sleep more often in general than women, and also used a greater number of swear words.

Interestingly, even as they employed menacing and NSFW language, study subjects kept things clean where grammar was concerned. Researchers write that “sleep talking parallels awake talking for syntax [and] semantics... suggesting that the sleeping brain can function at a high level.” They also noticed that while many subjects seemed to be engaged in tense conversations, they still minded their manners to some extent. In the midst of those thorny exchanges, “apparent turn-taking in the conversation respected the usual language gaps.”

Live Science connects these findings to “threat simulation theory,” an evolutionary psychology idea developed by Finnish neuroscientist Antti Revonsuo in 2000. The theory posits that bad dreams and nightmares essentially serve as "fire drills,” preparing us for the scary things that await us when awake. (Fun fact: bad dreams don’t technically cross the threshold into nightmare territory until they frighten you awake.) The need for these mental dry runs dates back to the days when subconsciously facing your very valid fears—such as now extinct real-life predators—could help you avoid becoming easy prey.

“If you missed a threat, you were lunch,” Ross Levin, a New York City sleep disorder specialist and clinical psychologist, told Reuters. “The ‘default’ dream is basically the bad dream.”

Revonsuo’s theory has its roots in earlier studies that found most dreams contain negative contents. In 1966, psychologists Calvin S. Hall and Robert L. Van de Castle reviewed dream accounts of 1,000 male and female college students and found nearly 80 percent involved at least one “‘negative’ element, including aggression, misfortune, failure, or one of four negative emotions (apprehension, anger, sadness, and confusion).” Sleep pathologist Frederick Snyder’s 1970 study of 635 U.S. college students’ dreams found two-thirds were negative, with fear and anger being the most salient emotions cited in dream reports. Researchers studying dream journals from 50 Swedish college students in 2007 wrote that “in the dreams of ordinary young adults threatening events are frequent, severe, realistic and targeted against the self and significant others.”

The conclusions of these studies might be inextricably related to the human tendency to recall bad dreams better than pleasant ones, but they also offer some compelling data. In comparatively low-trauma environments, there would be less need for an active threat simulation system, but anxiety-inducing life situations would still lend themselves to preparatory dreams. A college student might dream of receiving an “F” on an assignment ahead of a test she's procrastinated studying for. An office worker might imagine being naked in class ahead of a big presentation as a way of facing fears around potential embarrassment. Strict dream interpretation is mostly eschewed by modern psychiatry, but the theory suggests our brains may modify perceived threats via other symbols, the threat assessment aspect remains.

Studies involving larger samples and other traumatized populations (there are plenty in the U.S.) would be a good idea, and it’s not impossible that the correlation between trauma and dreams may be more complicated than currently understood. But taken together, these studies suggest some link between real-world threat-levels and the frequency with which the subconscious practices avoiding those threats.

There’s still no consensus on why we dream. There remain a mess of ideas, including one not-unpopular theory that dreams are a useless epiphenomenon that serves no real purpose. There are longstanding Jungian theories about dreams as a prism on the unconsciousness, and the notion that our dreams function like a self-moderated therapy session. Threat simulation theory, on some level, jibes with multiple previous propositions suggesting that dreaming helps us cope with nerve-wracking events: past, present or future.