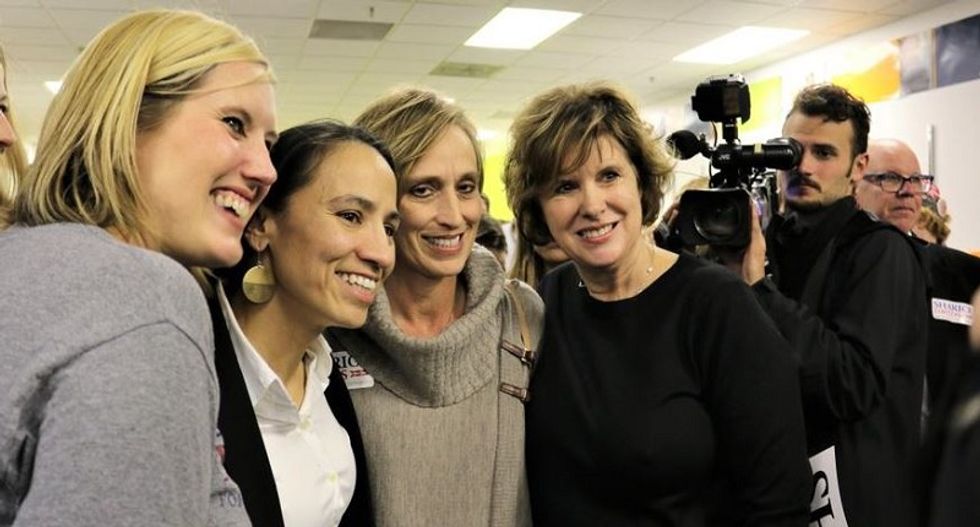 A record number of women were sworn into Congress on Jan. 3.

The influx of women candidates helped turn the midterm election into what many observers dubbed a “Year of the Woman.”

But despite a tide of voter sentiment favoring women, these winners got to Congress or a statehouse not by defining themselves as “women’s candidates,” but instead by sidestepping issues typically associated with their gender, from equal pay to reproductive freedom.

We are experts on women and politics, and in a recent study we conducted at the University of Maryland’s Rosenker Center for Political Communication & Civic Leadership, we examined 2018 political ads to understand how woman defined their candidacies and qualifications for office.

We found that, despite the momentum of the #MeToo movement, women were careful in playing the “gender card.” They avoided what are often construed as “women’s issues” that are associated with gender equality such as abortion, pay equity, sexual violence and harassment.

We studied general election ads produced by women challengers running for the U.S. Congress or for governor of their state. We used 52 ads from 25 candidates – nine Republicans and 16 Democrats. Although there were more Democratic women vying for office than Republicans, we made sure to balance the ads by party (29 ads by Republicans and 23 ads by Democrats). All of them were produced by candidates in what we defined as competitive races, meaning 10 points or less separated the candidate and their opponent on Sept. 30, 2018.

A dominant theme that crossed both Democratic and Republican ads is the candidate’s own power and achievements in careers that have historically excluded women. These ads showcase these women’s individual strengths that seemingly prepares them for the rough-and-tumble world of U.S. politics.

In her “Ring” ad, Democrat Sharice Davids, who was running for a U.S. House seat in Kansas, featured her hitting a punching bag – she used to be a mixed martial arts fighter. She identified herself as a “fighter” who will “never back down.”

Democrat Elaine Luria ran for a U.S. House seat in Virginia and chose to highlight her military career in the Navy. In her “Sea Change” ad, she is shown piloting a warship. The ad emphasizes that she was “deployed six times” during her military career.

Republican Martha McSally, who ran in Arizona’s U.S. Senate race, identified herself as the first woman to fly a fighter jet in active duty in her ad “Deployed.” Republican Young Kim, who ran for the U.S. House in California, defined herself as a “self-made” business leader who promised to never “give up” in an ad titled “My Community.”

One candidate in our study developed an ad exclusively focused on women’s reproductive rights (Dr. Kim Schrier’s “Door” ad – U.S. House candidate from Washington). The other ads, produced by Democrats and Republicans, glossed over the gender inequities women continue to face. Instead, they imply that gender equality has already been achieved because the candidates have single-handedly shattered gender barriers. As Merida L. Johns of the Monarch Center for Women’s Leadership Development makes clear, just because individual women are high achievers does not mean the structural barriers inhibiting women’s advancement have been removed.

Republican women, more than Democrats, had to tread carefully around issues of women’s equality. After all, a majority of Republicans sided with Justice Kavanaugh and President Trump after they were charged with sexual misconduct.

We saw this play out in the fact that more Republican women candidates aligned themselves with powerful men more than the Democratic candidates did. One reason they may have done this is to lessen the perception of their candidacy as a threat to voters accustomed to male leadership.

For example, Republican Carol Miller, who ran for the U.S. House in West Virginia, ran an ad featuring male veterans attacking her Democratic opponent Richard Ojeda for challenging the country’s “greatness.” At the end of the ad, she is flanked by two muscular men – one a coal miner and the other a Marine.

Some explicitly ran on Donald Trump’s coattails. And Tennessee’s U.S. Senate candidate Marsha Blackburn featured an ad showing her hugging the president and boasting about his endorsement of her.

Other Republican candidates used gender stereotypes to demean their opponents. For example, in her “Walk” ad, Elizabeth Heng, running for the U.S. House in California, challenged the masculinity of her opponent, Representative Jim Costa, by depicting him walking the streets in red high heels as the voice over mocked: “Costa’s walking in Nancy Pelosi’s shoes.”

These ads reveal that using their gender as an advantage, trying to promote women’s issues, or calling out sexist behavior are still a challenge for women in politics. The ads in our study reflect the cautionary words that Democratic pollster Celinda Lake offers to women candidates: “Traditional gender roles remain powerful, influencing what we perceive to be acceptable and appropriate behavior for men and women.”

In 2018, as The Washington Post reports, some candidates charged their opponents with “sexist” behavior while others more likely used “surrogates” to issue such accusations. Candidates stayed away from such controversial accusations in the ads we studied.

In his published research, sociologist Robert D. Francis writes that because “modern sexism” presumes “discrimination against women has been overcome,” a sense of “resentment” follows those who allege “sexism.” Rather than tackle the inequalities that women confront in public and private, many candidates in this study showed they could make it in a man’s world – throwing punches, shooting guns, steering warships, piloting planes, running corporations, and aligning themselves with powerful men.

As these newly elected women step into their leadership role this week, the question remains as to whether they will sidestep or tackle the gender equity issues that will finally make the “Year of the Woman” a relic of our past.