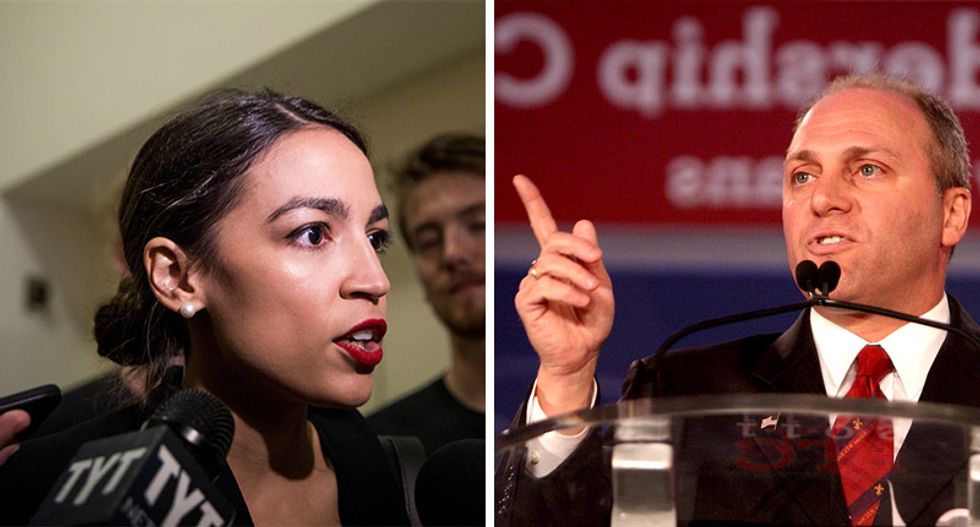 Rep. Alexandria Ocasio-Cortez, D-N.Y., just got into a heated Twitter debate with House Minority Whip Steve Scalise, R-La., over questions of tax policy — although Scalise cut things short after Twitter users began ridiculing him for nearly dying during a mass shooting in 2017, even though his own supporters also posted insulting tweets.

The online exchange began when Scalise, reacting to Ocasio-Cortez's proposal that the marginal tax rate be increased to 70 percent for Americans, tweeted, "Republicans: Let Americans keep more of their own hard-earned money Democrats: Take away 70% of your income and give it to leftist fantasy programs." His tweet included a link to an article that described Ocasio-Cortez specifically calling for the tax hike to fund programs in a Green New Deal.

In her response, Ocasio-Cortez tweeted to Scalise that "you’re the GOP Minority Whip. How do you not know how marginal tax rates work? Oh that’s right, almost forgot: GOP works for the corporate CEOs showering themselves in multi-million?bonuses; not the actual working people whose wages + healthcare they’re ripping off for profit." Her comment referenced the fact that her proposed tax increase would only apply to Americans who make more than $10 million each year.

At this point Scalise drew attention to some of the inappropriate responses of people who seemed to be supporting Ocasio-Cortez in the exchange, including one who wrote "snipe his ass," another who urged her to "kick his cane" and a third who praised her by saying "she's got better aim than James Hodgkinson, that's for sure." After citing these tweets, Scalise wrote "Hi @AOC. Happy to continue this debate on the Floor of the People’s House, but it’s clearly not productive to engage here with some of your radical followers. #StayClassy."

That said, many of the responses to Ocasio-Cortez from Twitter users who seemed to agree with Scalise were deliberately disrespectful toward the congresswoman, with at least one also implying violence will occur if her policies were implemented. One person tweeted, "Ms. Ocasio-Cortez, Obviously you don't know how economic works. If you tax the wealthy Americans at 70% why would they want to stay in this country? The top 3% taxpayers already pay more than 50%. Look at what is going on in socialist countries in Europe? The people are rebelling!" Another wrote, "Its funny how we used to see how socialism does not work, but now that the elitists on the left want their power back, they need votes and so socialism is now a successful model." Another Twitter user referred to Ocasio-Cortez as an "economic imp," while a fourth person implied violence could result as a result of Ocasio-Cortez's proposal by tweeting that "Here’s an idea, Taxation = Theft ....pretty sure we fought a war over taxes being levied against us before"

Scalise has not publicly expressed any objections to those tweets against Ocasio-Cortez.

The Louisiana congressman survived a harrowing ordeal after he was nearly assassinated during a mass shooting at a congressional baseball practice in 2017. After returning to the House of Representatives, Scalise explained to "60 Minutes" that "I found out later just how much damage was done internally. You know, I mean, my femur was shattered. The hip and pelvis had serious damage where the bullet went through and, you know, did some damage to areas that had to be shored up with steel plates and then they did a phenomenal job of rebuilding, you know, kind of the, rebuilding Humpty Dumpty. I mean, there were, there was a lot of damage inside that had to get fixed."