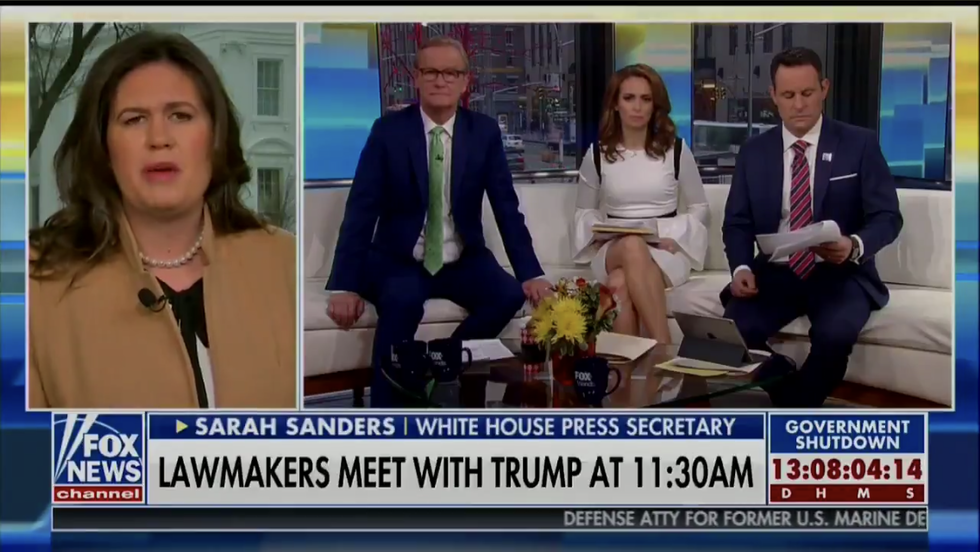 President Donald Trump's partial shutdown of the federal government continues apace, with no end in sight. He wasn't able to browbeat a Republican Congress into giving him his border wall in two years, and now that Nancy Pelosi has reclaimed the Speakership, his attempts to hold federal workers hostage are likely to be even more futile than ever.

And it is clear that White House Press Secretary Sarah Huckabee Sanders is beside herself that her boss isn't getting his way, as she made clear in a bizarre outburst on "Fox & Friends" on Friday.

"Sen. Mike Lee brought up a pretty good point last night," host Brian Kilmeade told Sanders. "Nancy Pelosi keeps saying putting up a wall, putting up a fence, is immoral. Does that mean she's calling for the removal of the 650 miles of fence that's there right now? When did putting up a fence become immoral?"

"That's a great question," said Sanders. "And I wonder if she's going to go on a crusade and take down all the fences and walls across this country? I certainly hope not. I'm sure that the people who have them around their homes, the institutions that have them, whether it's the Vatican or anywhere else, are not going to be real happy with the fact that Nancy Pelosi is calling their walls and their security immoral. It's never been immoral to protect people."

The walls surrounding the Vatican are a longtime obsession with Trump's inner circle. His social media director tweeted about them during the 2016 campaign, and Trump even brought up the Vatican walls while arguing with Pelosi as proof she should be supporting his agenda as "a good Catholic." Never mind that the Vatican's walls offer free access to the public, and the pope opposes Trump's plan to build a wall on the Mexican border.

But more to the point, Sanders' conflation of people erecting walls on their private land with sealing off the 2,000-mile border of a sovereign nation is ridiculous. A wall on private land typically doesn't disrupt national parks, wildlife preserves, or Native American gravesites. You don't have to split up towns and communities, or seize land under eminent domain and ruin farmers and ranchers' livelihoods to build one. And perhaps most importantly, when someone builds a wall around their house, it's usually not intended to send a message against Hispanics.

And while Pelosi has not explicitly advocated for tearing down the post-9/11 network of 650 miles of walls and fences that currently exist at the Mexican border, it would hardly be the end of the world if she did. There is no evidence these barriers have done anything to improve border security, and all they have done is make life hard for border residents — and polling says they broadly oppose adding more walls.

So to answer Sanders seriously: no, Pelosi isn't going to go around suburb by suburb ripping up picket fences. Because those aren't the problem. Trump's border wall is.