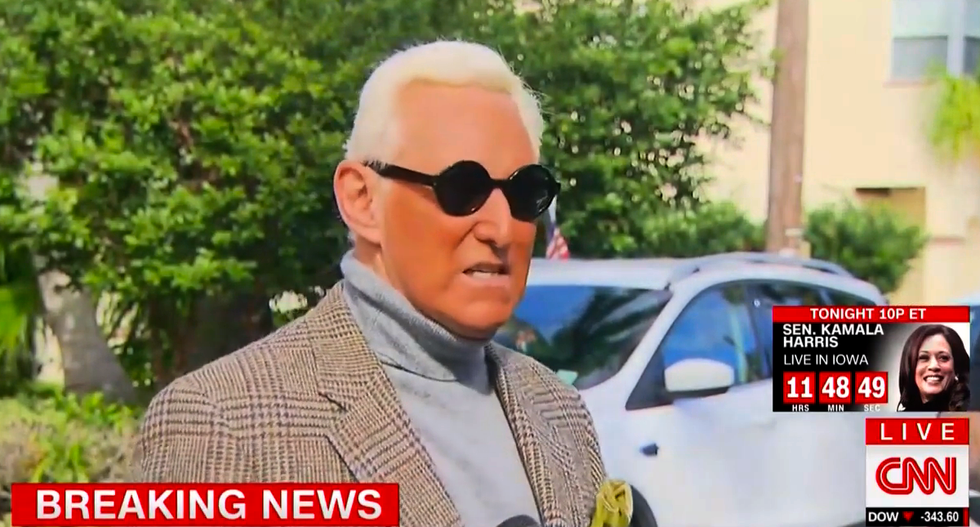 Roger Stone, close associate of President Donald Trump, held an aggrieved, self-pitying press conference outside his home on Monday, where among other things he told CNN that his colleague Jerome Corsi was lying to special counsel Robert Mueller and that the media was persecuting him.

“Corsi claims falsely that a memo he wrote me was part of a cover story. That is a demonstrably a lie, I can prove it,” said Stone, who said Corsi was “trying to cut a deal” to save his own skin. “He claims that I knew about the Billy Bush tape in advance. That is also a lie.”

“I am someone who fights for what he believes in, who has supported candidates men and women who stand for what I stand for, that politics is a noble profession,” said Stone, whose reputation for corruption is legendary. “The key thing is to fight for what you believe in and not be cowed by the fake news media.” He then laid into the press.

“The coverage of my indictment in the New York Times is the single most biassed, slanted, inaccurate, untruthful pack of disinformation that I have seen,” he said. “The Washington Post is not very far behind.”

One reporter asked if he still believed Hillary Clinton “should be locked up”, and Stone eagerly took the bait, launching into an attack not just on the former presidential candidate but on the country’s law enforcement and intelligence communities.

“She lied under oath before Congress, she lied and destroyed evidence, she intimidated witnesses, and she pays no penalty,” Stone said. “Mr. Comey, Mr. Brennan, Mr. McCabe, General Clapper, Hillary Clinton, they all lied under oath regarding material matters of great consequence. I am falsely accused of lying to Congress which I did not do. When are they being prosecuted, where is the equal application of the law?”

CNN noted “a number of unsubstantiated claims” as they cut away.