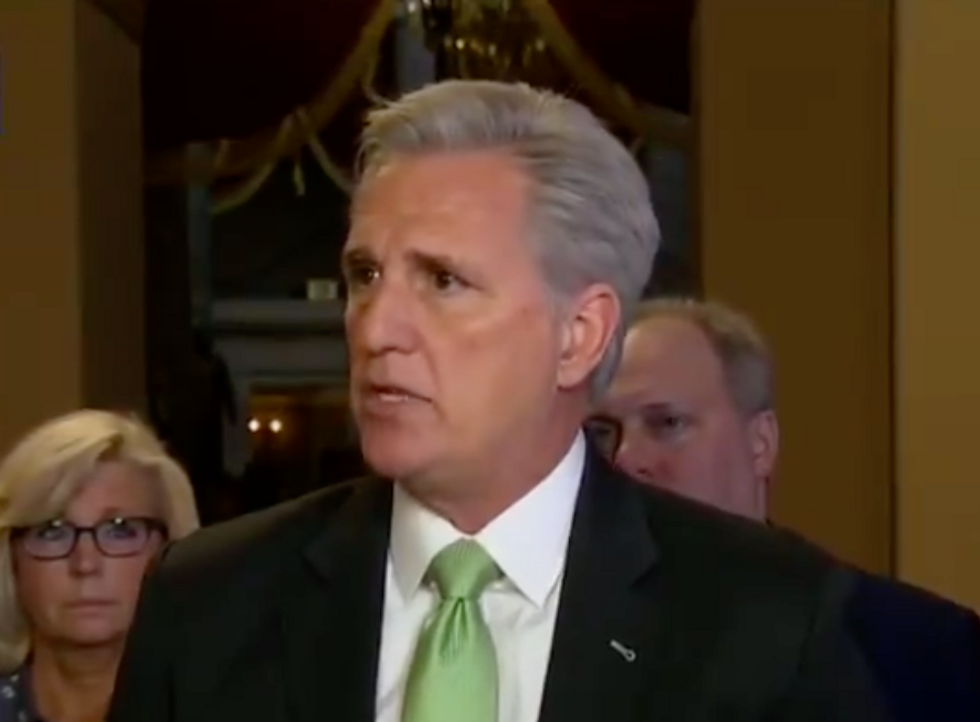 Hours after being sworn into Congress on January 3, Rep. Rashida Tlaib of Michigan used some profanity when discussing her desire to see President Donald Trump impeached. And some prominent Republicans have been going ballistic.

Tlaib, the first Palestinian-American woman elected to Congress, told a crowd at a MoveOn event in Washington, DC, “People love you, and you win. And your son looks at you and says, ‘Momma, look, you won. Bullies don’t win.’ And I said, ‘Baby, they don’t. Because we’re going to go in there, and we’re going to impeach the motherfucker.’”

Tlaib’s comment drew a huge round of applause from the MoveOn crowd, and the congresswomen doubled down on her call for impeaching Trump the following day when she tweeted, “I will always speak truth to power.” Republicans, meanwhile, are furious—or at least pretending to be.

Some of the grandstanding came from House Minority Leader Kevin McCarthy, who told reporters, “You know what our freshman class did? They put together a resolution to actually work with one another, to not use foul language. And they got almost every single freshmen to sign on to it. This is the difference with this new Congress.”

McCarthy has been calling for House Speaker Nancy Pelosi to condemn Tlaib.

“We watched a new freshman stand up, use this language, get cheered by their base — and we watched a brand new speaker say nothing to her,” McCarthy complained. “That is not the body of what we serve in, and that action should not stand. Somebody should stand up to it.”

Wyoming Rep. Liz Cheney, chair of the House Republican Conference and daughter of former Vice President Dick Cheney, attacked Tlaib for promoting an environment of “politicization and partisanship” and stressed, “You have seen over the last 24 hours very foul language.”

But Liz Cheney’s scolding of Tlaib is totally hypocritical in light of the fact that in 2004, her father told Democratic Sen. Patrick Leahy of Vermont, “Go fuck yourself.” And while Tlaib’s “impeach the motherfucker” comment was made in a bar at a MoveOn gathering, Dick Cheney told Leahy off on the floor of Congress—not in a bar. Further, the vice president stood by his comment, stressing that he “felt better” because of it.

“Ordinarily, I don’t express myself in strong terms, but I thought it was appropriate here,” Vice President Cheney told a supportive Fox News.

Of course, Trump has never been shy about using profanity—as Pelosi has pointed out. At an MSNBC town hall on January 4, Pelosi said of Tlaib’s comment, “I don’t like that language, I wouldn’t use that language. But I wouldn’t establish any language standards for my colleagues, (and) I don’t think it’s anything worse than what the president has said.”

In fact, Trump has celebrated his use of the word “motherfucker.” In response to Republicans’ fake outrage, Scott Dworkin (host of the podcast “The Dworkin Report”) posted on Twitter a link to a video of a profanity-laced speech in which Trump called for tariffs against China. The president drew major applause when telling supporters that rather than politely mention tariffs to Chinese officials, he would prefer to be more direct and say, “Listen, you motherfuckers, we’re going to tax you 25%.”

But Republicans have two different standards when it comes to using profanity: one for Democrats like Tlaib, another for themselves. And the more Liz Cheney and Kevin McCarthy chastise Tlaib, the more obvious it is that double standards are their favorite standards of all.