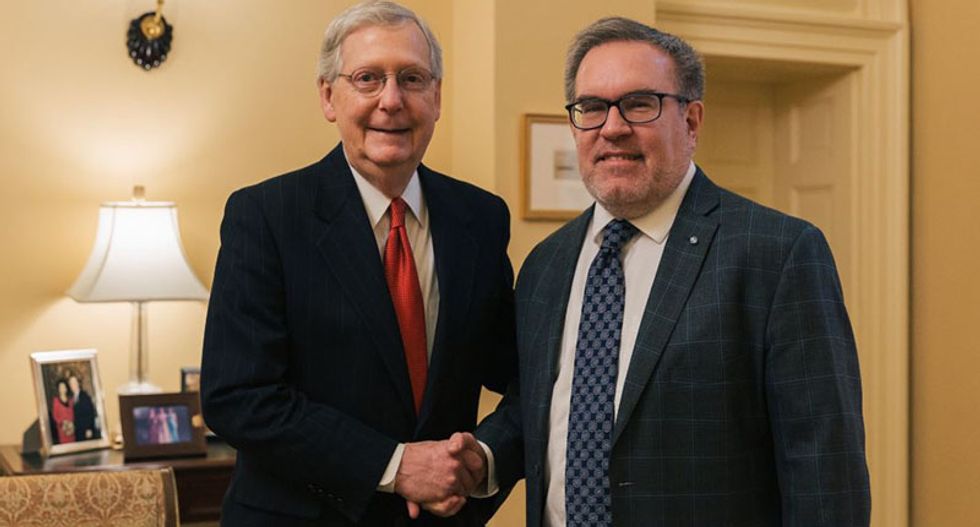 Not a single Republican senator has joined the effort to give back pay to hundreds of thousands of federal contractors who were unpaid during the partial government shutdown. But the party’s leaders are pushing ahead with a bill to repeal the federal estate tax on behalf of the wealthiest Americans.

Minnesota Sen. Tina Smith and Massachusetts Rep. Ayanna Pressley, both Democrats, have introduced bills that would give back pay to federal contractors, who are not entitled under law to be paid after a shutdown as federal employees are, Vox reported.

According to the Washington Post, the total number of federal contractors affected could be in the millions. Federal contractors were barred from doing any business for the government for 35 days, meaning many workers missed out on nearly 10 percent of their annual pay.

The bill would allow agencies to provide workers with up to $965 per week in back pay.

Smith said the bill is an easy fix because federal agencies have already allocated money for the contractor costs but haven’t paid them out.

“If you think about it, they’re paying people for work they would have done but for the shutdown,” Smith told Vox. “In many cases, that money was already budgeted; it just hasn’t been spent.”

According to Vox, the bill already has 20 co-sponsors in the Senate -- but not a single Republican is backing the bill.

Instead, on Monday, three top Republican senators introduced a bill to repeal the federal estate tax, which is paid by fewer than 2,000 of the wealthiest Americans per year.

The Republicans already kneecapped the estate tax in their 2017 tax law, allowing couples to pass on up to $22 million worth of assets tax-free. Prior to the law, an individual could pass up to $5.45 million in assets tax-free.

Under the new law, just 1,700 families per year would be expected to pay the estate tax, the Tax Policy Center’s Howard Gleckman told the Post. The estate tax funds about 0.6 percent of the federal budget in 2018.

While the Republicans renew their focus on helping the rich keep more of their money, federal contractors may still be weeks away from getting their first paycheck of the year.

Janice Morgan, who works at the contracting firm Unispec, which provides staffers for government agencies, told the Washington Post her next paycheck may be up to four weeks away because the company cannot bill the government for work it hasn’t done. She added that her health insurance is in doubt because the shutdown meant her company was unable to pay its premiums.

While the government has reopened, Trump has threatened to shut it down once again on Feb. 15 if Congress does not approve a deal to fund his proposed border wall.

“It feels like we are still hostages,” Morgan said. “I’m just so happy to be going back to work and to be able to get on with our lives because I need our health insurance to fill these prescriptions. But who knows if this will all happen again in three weeks.”