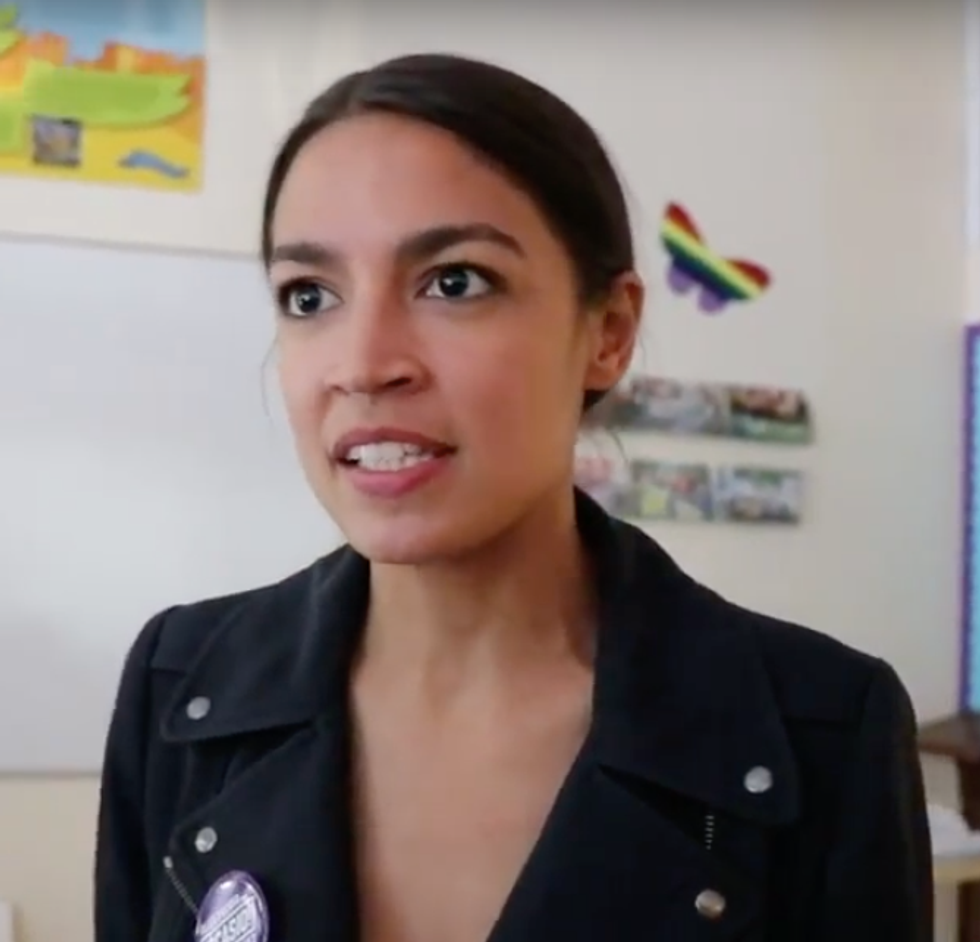 Incoming Rep. Alexandria Ocasio-Cortez, D-N.Y., took aim at the Democratic Party on Monday over the newly-announced climate crisis committee — a body she and other progressives say lacks the teeth needed to avert planetary disaster.

In a Twitter thread, Ocasio-Cortez said that her proposal for a select committee on a Green New Deal — a key demand of the youth-led Sunrise Movement — contained "3 simple elements: 1. No fossil fuel money on climate cmte 2. Offer solutions for impacted communities 3. Draft sample #GreenNewDeal."

Yet all three, she said, were deemed "too controversial."

Given the rejection of those elements, as well as the expected lack of subpoena power by the new Select Committee on the Climate Crisis, announced by presumptive House Speaker Nancy Pelosi last week, Ocasio-Cortez said it will "will be in an even weaker position than the select climate committee of 10 years ago," referring to the House committee in existence from 2007 to 2011.

Because "we've got a planet to save," she argued that "we simply don't have any other choice" than to keep pushing for a Green New Deal. "If it's radical to propose a solution on the scale of the problem, so be it."

The Sunrise Movement was also none too pleased with the details that have come out thus far about the Select Committee on the Climate Crisis, including the appointment of Rep. Kathy Castor, D-Fla., as chair. "Refusing to embrace the proposal for a Select Committee on a Green New Deal would be a dereliction of duty from Nancy Pelosi and Democratic leadership and a surefire way to lose the votes and energy from the supermajority of Americans who back a Green New Deal," said Sunrise founder and spokeswoman Varshini Prakash.

"By developing a plan for a Green New Deal, we have an opportunity to create millions of good-paying jobs, virtually eliminate poverty in the United States, and invest in a just transition for communities that have been left behind by racism and corporate greed," Prakash added in her statement released Friday.

According to Rep. Ro Khanna, D-Calif., who back in November urged Pelosi to appoint Ocasio-Cortez chair of a Green New Deal select committee, "The problem is institutional — it's a turf war."

Speaking to The Intercept, Khanna said, "There's only one reason the select committee didn't get [more powers], and that is the jurisdictional concerns of Frank Pallone." The New Jersey Democrat is the incoming chairman of the House Energy and Commerce Committee. Pallone also just brushed off the urgency behind the Green New Deal's 10-year time frame for achieving 100 percent renewable electricity, saying, "I don't know if that's technologically feasible."

Khanna also recently accused Pallone of threatening not to move any of his bills because of his support for the Green New Deal.

"Mr. Pallone has made it clear that he thinks this infringes on his committee's jurisdiction," said Khanna, though the proposed select committee would in fact not have power to introduce legislation, but would draft legislation other committees could then take up.

Still, as Ocasio-Cortez made clear in a tweet last month, the real aim isn't to create a select committee, but rather "to treat climate change like the serious, existential threat it is by drafting an ambitious solution on the scale necessary — aka a Green New Deal — to get it done."