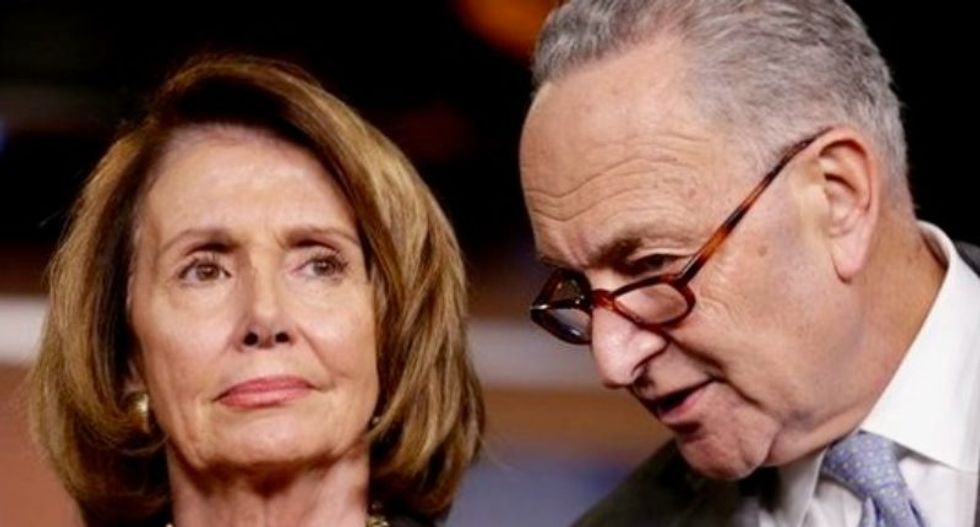 Progressives in recent weeks have applauded Democrats' refusal to bend to President Donald Trump's demands for a wall at the U.S.-Mexico border, a key component of his xenophobic anti-immigration agenda. But on Friday, digital rights advocates called on Democratic lawmakers to expand their fight against the wall into a fight for all human and constitutional rights—instead of suggesting alternative "border security" proposals that would infringe on civil liberties.

Fight for the Future launched a campaign Friday to fight against House Speaker Nancy Pelosi's (D-Calif.) suggestion on Thursday that a so-called "technological wall" would be an appropriate alternative to Trump's planned concrete or steel wall.

Trump, Pelosi said in a press conference, "knows we all support border security and that there's a better way to do it...90 percent of the drugs come in through the ports of entry. So what we are proposing is to build the infrastructure of the ports of entry...to have the scanning technology to scan cars coming through, for drugs, contraband of any kind, weapons even."

"The positive, shall we say, almost technological wall that can be built is what we should be doing," Pelosi said.

Fight for the Future swiftly circulated a petition following Pelosi's speech, calling on Democrats including Senate Majority Leader Schuck Schumer (D-N.Y.) not to replace Trump's proposed wall—which critics say would further endanger migrant families coming to the U.S.—with a surveillance system that would threaten their right to be protected from unlawful search and seizure.

Sarah St. Vincent, a surveillance researcher at Human Rights Watch, wrote on Twitter that "'more surveillance' has become the default answer to far too many difficult policy questions."

Fight for the Future pointed to border surveillance programs that already exist and "desperately need Congressional review" instead of being expanded, including searches of electronic devices and monitoring by drones.

"Current border surveillance programs subject people to invasive and unconstitutional searches of their cell phones and laptops, location tracking, drone surveillance, and problematic watchlists," wrote Fight for the Future in its petition.

The group addressed Democratic leaders directly, writing, "Drop your plan for a 'technological wall,' or increased surveillance, at the border."