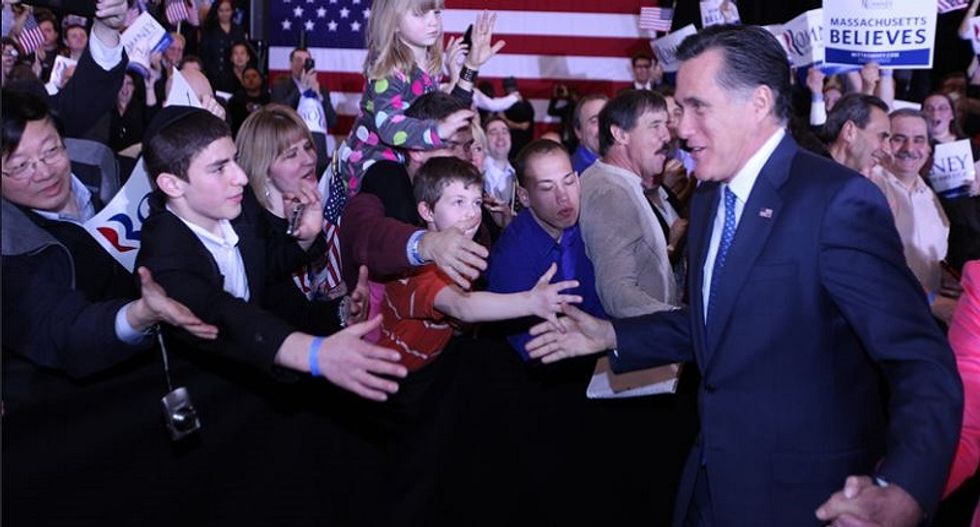 Democrats celebrated yesterday as Rep. Nancy Pelosi once again took the speaker's gavel  and the most diverse freshman class in history was sworn in to make a new majority in the House of Representatives. It was a poignant reminder that the majority of this country sees America's diversity as our greatest strength in a world that is becoming smaller by the day. That point was hammered home in Pelosi's speech when she pointedly said, "As President Reagan said in his last speech as president: “If we ever closed the door to new Americans, our leadership in the world would soon be lost.”

Sour Republicans couldn't even applaud the words of a man they used to revere as their idol and just sat glumly, checking their watches. Trump's GOP is nothing if not sore losers.

There is one newly-elected Republican official who stepped up this week, however, to harshly criticize the president.  That would be the new junior senator from Utah, Mitt Romney, who seemed to be throwing down the gauntlet and fashioning himself as Trump's main rival within the party. He wrote that Trump's presidency had made a "deep descent in December," which is odd since it's been horrible from the moment he took office. He continued:

It is well known that Donald Trump was not my choice for the Republican presidential nomination. After he became the nominee, I hoped his campaign would refrain from resentment and name-calling. It did not. When he won the election, I hoped he would rise to the occasion. His early appointments of Rex Tillerson, Jeff Sessions, Nikki Haley, Gary Cohn, H.R. McMaster, [John] Kelly and [Jim] Mattis were encouraging. But, on balance, his conduct over the past two years, particularly his actions last month, is evidence that the president has not risen to the mantle of the office.

Yeah, no kidding. Let's just say that it doesn't say much for Romney's perspicacity that he didn't realize this earlier.  But then Romney has been all over the map with Trump ever since he gingerly accepted his endorsement for president in 2012, called out "the bullying, the greed, the showing off, the misogyny, the absurd third-grade theatrics" in a scathing speech during the 2016 election -- and then kissed the ring hoping for a job in the administration after Trump won.  (The dire predictions in his 2016 speech were actually pretty much on target.)

But don't be fooled. Romney has no regrets about the agenda Trump has managed to enact, meaning that he, like all the rest, won't step up and actually use the power he has to actually stop the man from doing his worst.  At best, he will be like former Sens. Jeff Flake or Bob Corker, who often complained about Trump's behavior but lifted nary a finger to stop him, a comparison Trump himself brought up with an unusually mild Twitter riposte.  (His defenders were not so restrained.) I wouldn't expect too much from Romney other than a few cranky soundbites.

That doesn't mean his salvo isn't significant, however. Many of the Beltway chatterers took it to mean that he was planning yet another run for president, this time to take on Trump in a primary. Romney says he has no intention of doing that but it seems obvious that he is at least setting himself up as the fallback in case Trump crashes and burns and is unable to run again.

Vice President Mike Pence's adoring sidekick act has turned him into a joke so the GOP would have to look elsewhere in such a situation and Romney is the logical choice. He has a safe Republican seat in Utah and a network of ready activists and donors if he has to make a late start. It makes sense that he would be the anti-Trump waiting in the wings. I'm only surprised that he's the first to really position himself in that role. It's been clear for some time that Trump's hold on the White House is precarious and you'd think some ambitious pols (besides outgoing Ohio Gov. John Kasich, who just doesn't seem to be able to lay a hand on Trump)  would have seen the opportunity.

I don't know what Romney's motives are. Maybe he really does see Trump as a threat to the republic and considers himself America's savior in waiting. But if he did step into that role he'd almost certainly be doomed to lose the presidency a third time. Like so many other Republicans, whether Trump lovers or NeverTrumpers, he hasn't yet grappled with the central problem they are facing as a party: Their agenda is dead, and they just haven't held the funeral.

Romney laid out the usual list of things he agrees with Trump about, starting with the massive tax cuts that have done absolutely nothing but line the pockets of wealthy people like Trump ... and Romney. He's also happy with the wrecking ball Trump has taken to regulations that keep average citizens from dying for lack of clean air and water. And he's thrilled with all these extremist right-wing judges they've packed the courts with. That's basically all the Republicans have left: tax cuts and enabling corporations to run hog-wild.

All of this came to mind as I read this piece by Benjamin Wallace-Wells in the New Yorker about the demise of the Weekly Standard, the conservative magazine whose rich bosses decided to cease publication because it was no longer relevant in the Trump era. But the magazine, like the Republican Party itself, was in decline before Trump came on the scene and for the same reason that the anti-Trump GOP establishment, including Mitt Romney and Weekly Standard founder Bill Kristol, have been impotent to stop him. All that's left of their party is Trump and they can do nothing but cling to him like a bunch of barnacles on a great white whale.

Wallace-Wells concludes his piece with this observation:

The conservative movement right now is populated by leaders who do not like Trump but who have not been able to envision a future for the Republican Party that does not include him and that can still inspire the grassroots. They need more intellectuals, not fewer. They need people who can imagine an ending.

There will always be a conservative party in America. But the conservative movement of Ronald Reagan has already ended. They need people who can imagine a new beginning.