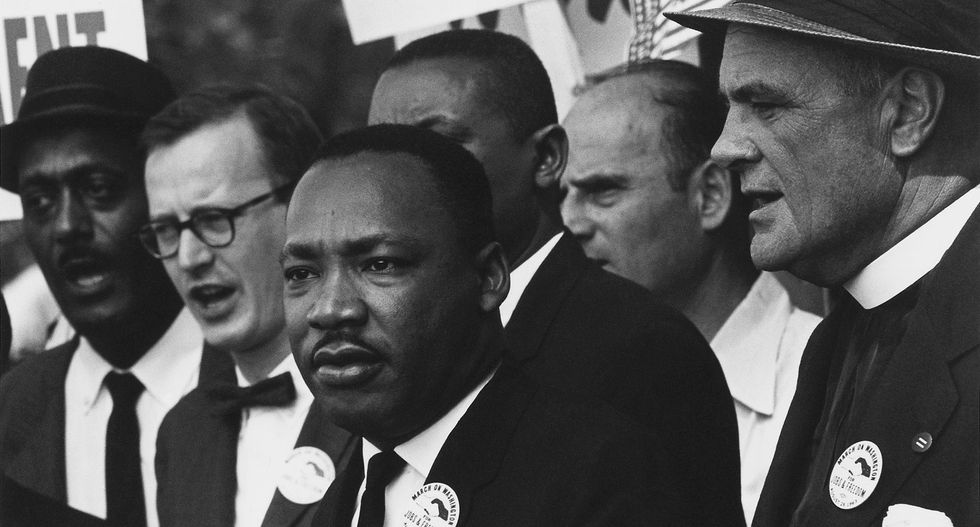 The majority of white Americans consider themselves sincerely committed to justice for the Negro. They believe that American Society is essentially hospitable to fair play and steady growth toward a middle-class utopia, embodying racial harmony. But unfortunately, this is a fantasy of self-deception and comfortable vanity. Overwhelmingly America is still struggling with irresolution and contradictions…”

It has become increasingly evident that the “post-racial America” widely discussed after the election of the nation’s first Black president was a pre-Trump example of “fake news.” On this 90th birthday of Dr. Martin Luther King Jr., we know there has been only nominal progress and even outright regression of wealth accumulation for African Americans and Latinos in America.

From the emergence of Black Lives Matter to the Dreamers movement we have seen youth of color standing up against injustice targeted towards their community. While these movements were broadcast on television and social media, a far less visual attack took place on the economics of Black and Latino households.

In our new report, co-authored with Chuck Collins and Josh Hoxie of the Institute for Policy Studies, “Dreams Deferred: How Enriching the One Percent Widens the Racial Wealth Divide,” the primary trend outlined in our findings shows wealth concentrating into fewer and fewer hands over time.

For example, the median American family saw their wealth drop 3 percent between 1983 and 2016, while the richest 0.1 percent have seen their wealth jump 133 percent. But inequities of our economic system are not experienced equally by all groups. Over the past three decades, median Black household wealth has decreased to just 2 percent of the $147,000 of wealth the median White family owns. The median Latino family has assets worth $6,600 – only 4 percent as much as the median White family.

The difference in wealth ownership by race is clear evidence that past policies have manifested into today’s disparities that place White Americans at an advantage. Redlining, tax policies, and wage and employment policies have created several centuries of racial advantage and discrimination in asset-building and are reflected in today’s concrete “net-worth” numbers. Therefore, the proclaimed “post-racial” society is a convenient mirage for some and false hope for others.

When remembering Dr. King, we often talk about his “Dream” of greater racial equity and this dream, this vision, is as necessary as ever.  Dr. King noted in his famed “I Have A Dream” speech that “the Negro lives on a lonely island of poverty in the midst of a vast ocean of material prosperity.” Our report “Dreams Deferred” notes how this island of poverty looks in the 21st century.   White families are as likely to have zero or negative wealth (about 15 percent) as they are to be a millionaire (15 percent) while Black families are about 20 times more likely to have zero or negative wealth (37% of Blacks) than be a millionaire (1.9 percent of Blacks). Latino households are in a similar situation where they are 14 times more likely to have zero or negative wealth (32.8 percent of Latinos) than be a millionaire (2.3 percent of Latinos).  This shows there is an undeniably uneven playing field for economic mobility in America and as a country there is much that must be done to fulfill the visions of Dr. King.

There are signs that America is starting to reckon with some of the visionary economic policies articulated during the Civil Rights era as listed in the Freedom Budget. Today a bevy of radical policy proposals are being articulated to redirect the nation currently on the path to ongoing economic apartheid.  These policies include

This year lets commemorate Dr. King and the ideals he stands for by advancing concrete policy that can turn King's famous dream into a reality and move beyond our “fantasy of self-deception and comfortable vanity.”