Lara Trump: 'It is a little bit of pain' that federal employees aren't getting paychecks — but 'this is bigger than any one person' 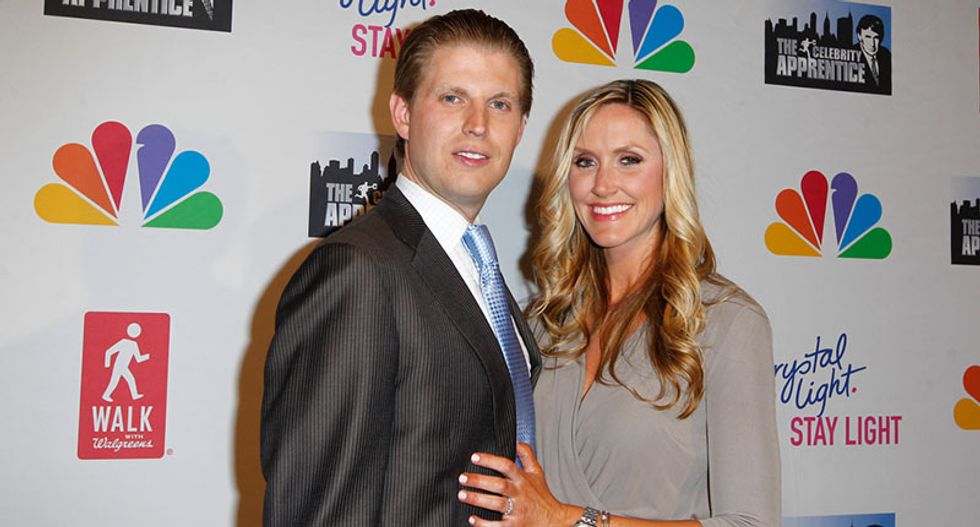 Lara Trump, wife of Eric Trump, is a woman who has never missed a paycheck, let alone three paychecks in a row. She currently gets paid in a murky role for Donald Trump’s 2020 digital campaign operations, and last year was recorded offering White House castaway Omarosa Manigault-Newman a $15,000-a-month job to do something (nothing) and telling her that all she had to do was sign a non-disclosure agreement and promise not to say anything negative about Donald Trump.

Now Lara Trump is hitting the PR trail to drum up support for Donald Trump’s shutdown, which is currently devastating more than 800,000 federal workers, millions of federal contractors, their families, and the businesses that rely on them to eat at their restaurants, shop at their stores, and so on. It’s a disastrous economic tsunami gaining strength by the minute. All for a wall that her father-in-law said for years, over and over and over again, would be paid for by Mexico, not by U.S. taxpayers.

With that in mind, Lara Trump did an interview with Bold TV, and she had a simple message for federal workers and their families being held hostage by the Trumps: Sure, this is a “little” painful, but “this is bigger than any one person.” From the Hill Reporter:

“Listen, this is, it’s not fair to you, and we all get that, but this is so much bigger than any one person,” Lara Trump told Bold TV when they asked her what she’d say [to] those affected by the shutdown. “It is a little bit of pain, but it’s going to be for the future of our country and their children and their grandchildren, and generations after them will thank them for their sacrifice right now. I know it’s hard, I know people have families, they have bills to pay, they have mortgages, they have rents that are due. But, the president is trying every single day to come up with a good solution here, and the reality is, it’s been something that’s gone on for too long, and been unaddressed, our immigration problem. If we do nothing right now, it’s never gonna get fixed. This is our one opportunity. So, I would just tell them please stay strong. We appreciate everything that you’re sacrificing. We’re behind you and we’re going to do everything we can. The President is doing everything he can to resolve this quickly.”

This is so much bigger than any one person? No, it isn’t. It is exclusively about the fragile ego of one person and one person alone. This is about the fact that Donald Trump used his big mouth to back himself into a corner, and rather than do the right thing for the nation, end the shutdown and get back to discussing the best way to secure the border, he again is putting his own ego over what is best for the nation. And why not? The Trumps aren’t missing any mortgage payments. The Trumps aren’t standing in line at food banks. The Trumps aren’t staring at the ceiling all night, wondering if the landlord is going to change the locks the next day because the rent is past due. The Trumps aren’t worried grandma will be getting kicked out of the nursing home.

Donald Trump and his family of wealthy deplorables are harming millions of Americans for a wall that security experts have said over and over and over again is an ineffectual way to secure the border in 2019 and beyond. But why not? They are not suffering. For them, it is no big deal to inflict pain on federal workers, so long as Donald Trump doesn’t look weak and ineffectual. Pain is for the little people.