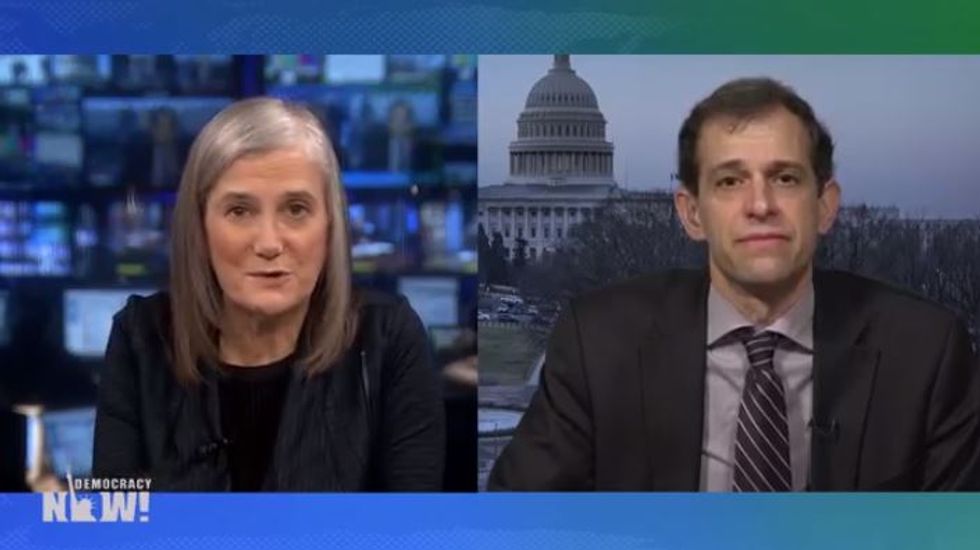 President Trump says that he will likely declare a national emergency over the border wall if negotiations over the government shutdown continue. We speak with Robert Weissman, president of Public Citizen. “The Congress has given the president quite a bit of authority to declare emergencies with terms that are almost unbounded,” Weissman says. “Congress has always expected, and society has always expected, that presidents wouldn’t abuse that authority recklessly, declaring emergencies just because they want to. We obviously have a president now who has no such constraints.”

AMY GOODMAN: But let me ask about President Trump declaring a national emergency. Some are speculating that the fact that the White House counsel is with him as he goes down to the border to McAllen, Texas, suggests he might be talking about declaring this emergency, which he says he has an absolute right to do. What is the significance of this? And then, possibly, the Pentagon coming up with two-and-a-half billion dollars extra to build the wall. And what does it say about a budget where an agency can find two-and-a-half billion dollars extra?

ROBERT WEISSMAN: Well, you know, first, we shouldn’t ignore that last point you made. I mean, there’s so much money being wasted on military spending right now, you know, huge amounts of just money inside the Pentagon sloshing around, going to places where they can’t identify who is being paid and what it’s for. That’s its own legitimate national crisis that needs to be addressed.

But to the bigger point about the emergency, you know, as a matter of law, it’s going to be a complicated thing. The Congress has given the president quite a bit of authority to declare emergencies with terms that are almost unbounded and with powers that have few bounds. Congress has always expected, and society has always expected, that presidents wouldn’t abuse that authority recklessly, declaring emergencies just because they want to. We obviously have a president now who has no such constraints. So, if he does proceed, which I think is reasonably likely, it’s going to be a complicated matter of law.

But beyond what the law is, if you just think about the underlying principles, the sort of—the real constitutional principles, the democracy principles, it’s a serious matter, beyond just the outrage of funding a stupid, needless and immoral wall, or even part of one, which is what he would propose to do. He wants funding for a border wall. Congress is saying no. The move to call a national emergency is for the president to say, “I will not be constrained by what Congress says. Even though there’s not really a national emergency, I’ll just invoke these powers. I can do something that would otherwise be illegal, simply by declaring a national emergency.”

Now, that is—if you follow the logic of that, that leads to almost unbounded presidential power. And when you have an authoritarian like Donald Trump in office, that is a frightening prospect. It does not have to end just at the reallocation of billions of dollars from the Pentagon, for whatever it was going to be spent on, towards building a useless and immoral wall. That authority could be invoked for all kinds of quite terrifying purposes, and it’s something that goes actually way beyond the significance of the wall itself, and something that we should be very, very concerned about, if it happens, as I think is reasonably likely.

AMY GOODMAN: And, of course, this would all go to court.