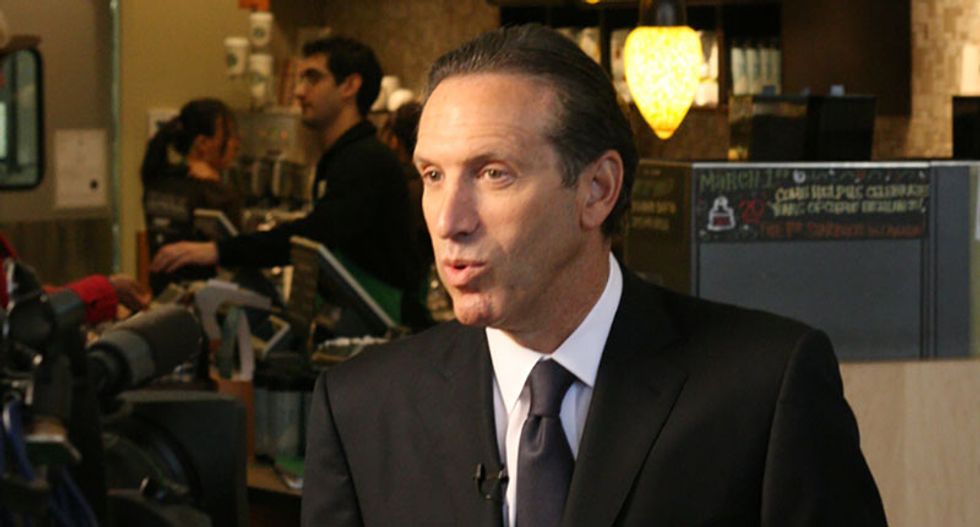 Billionaire and former Starbucks CEO Howard Schultz says he is thinking of running for president – not as a Democrat but as a "centrist independent" – and it seems the only ones truly excited about the news are President Donald Trump and Howard Schultz.

Trump on Monday egged Schultz on – taunting him as Trump is prone to do – saying he doesn't have the "guts" or smarts to run.

A Schultz third-party run would absolutely siphon off votes from the Democratic nominee, making very likely a Trump re-election win.

Schultz, a lifelong Democrat, on CBS' "60 Minutes" appeared to not care about that likelihood.

He also said the primary reason he would run is to reduce the deficit.

Meanwhile, many on social media are blasting the once-popular coffee purveyor who spent decades turning Starbucks into a household name.

I think @HowardSchultz should totally run for city council in whatever city he lives
— Preet Bharara (@Preet Bharara)1548649797.0

Howard Schultz is doing a book event in NYC tonight in case folks want to drop in and tell him not to run https://t.co/XPHAs7jZPM
— jordan (@jordan)1548686318.0

The worst part about Howard Schultz's announcement is that he did it on a day when Kamala Harris drew a huge crowd… https://t.co/Du1DRom0c5
— Jennifer Hayden (@Jennifer Hayden)1548681671.0

It feels good to be here. My hope is to share my truth, listen to yours, build trust, and focus on things that can make us better.
— Howard Schultz (@Howard Schultz)1548623728.0

Not since George Washington has a non-major party candidate won the election. Many predict your candidacy would dra… https://t.co/OmfKt4NQCJ
— Soledad O'Brien (@Soledad O'Brien)1548634411.0

It feels good to be here. My hope is to share my truth, listen to yours, build trust, and focus on things that can make us better.
— Howard Schultz (@Howard Schultz)1548623728.0

Have to hand it to Howard Schultz - I can't think of another person whose potential presidential campaign was greet… https://t.co/dP1Fm5AJxa
— Paul Waldman (@Paul Waldman)1548677446.0