'I do not belong here': Jesse Jackson brings hope to a Cook County jail 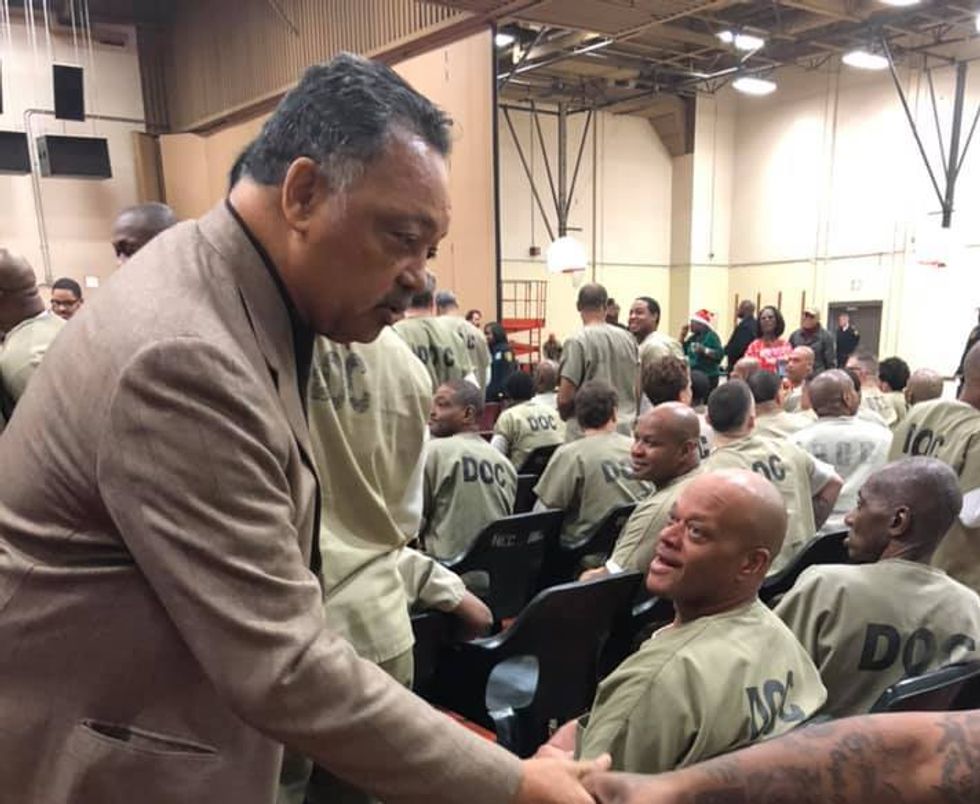 “I...do not…belong here…” Jesse Jackson spoke slowly and deliberately, demanding that thousands of nonviolent inmates at Cook County Jail, the largest in Chicago, repeat after him. Most of the men and women demonstrated infectious avidity, shouting the declaration as if it would reverberate throughout the entirety of the criminal justice system.

Jackson began visiting jails and speaking with inmates on Christmas morning fifty years ago as a young aide for Dr. Martin Luther King, Jr. In five decades, he has not missed one year. “We are here to inspire and entertain,” Jackson told me referring to the staff, band, and choir of the Rainbow/PUSH Coalition, the civil rights organization he founded and continues to lead, “but also to transform Christmas day into liberation day.”

For the devout Christian and non-Christian alike, Jackson would December 25th to become a day for study and celebration of freedom and justice. “Christmas is a political season of religious passion,” Jackson said as if to remind his audience that his first and ongoing occupation is that of minister. “Jesus was born under a death warrant, a refugee under occupation,” Jackson continued in a reframing of the nativity, “He became a political prisoner – a victim of an unjust trial and capital punishment.”

Given that Jesus continually emphasized a mission to “set the captives free,” Jackson thunderously argued that instead of employing the holiday as a slick and clever means of marketing for commercial products, and rather than making its emblematic icon Santa Claus, Christmas should serve as an appointment for a rally on the calendar – a day when ministers, rabbis, and political activists around the country struggle, fight, and litigate to emancipate those who suffer through the squalor of jail for nonviolent offenses, often without conviction. A large amount of inmates are “pretrial,” meaning they remain hostage to a system functioning as a modern day debt prison. Unable to pay bail, they are locked away and shut out of society for weeks, months, even years: Sad symbols of not only an overcrowded criminal justice system, but one that is frequently cruel, and intent on rationing out the cruelty according to America’s oldest mechanisms of injustice – racism and hostility toward the poor.

“I do not belong here,” the call and response climactic mantra of Jackson’s sociopolitical sermon at Cook County Jail was doubly resonant in the old auditorium of the holding facility. It was Jackson’s attempt to inculcate higher ambition within the inmates. “We’re helping to get you out,” Jackson said, “But you need to do your part and stay out.” When the Civil Rights Leader arrived, he walked through each row, stopping to shake the hand and give holiday greetings to every inmate. A young black man in a beige jumpsuit reminded Jackson that they met in the same place two years earlier. “You’re still here?” Jackson asked with bafflement. “No, I’m back, though,” he said. “Well, I don’t want to meet you here again,” Jackson offered.

At several turns in his remarks, Jackson offered exhortation of “personal responsibility,” to use an increasingly dubious conservative buzz phrase. “I do not belong here,” however, has a political application. With just a little philosophical and rhetorical elasticity, it covers an American issuance of justice that only rewards responsibility depending on the person. Meanwhile, millions of inhabitants of the world’s richest and most powerful nation know only poverty. Out of the womb they enter into a closed-door society, receiving steadfast incentive for irresponsibility. “When a sociologist from London visited America to study the penal system,” Jackson informed the audience, “He asked, ‘where is the jail for white people?’”

The perversity persists after release for convicted felons. Virtually unemployable, and ineligible for federal student aid, including loans, ex-cons often feel, with good reason, that the most familiar means of earning an income, even if illegal, are the most reliable. Nearly every state insists on the reduction or elimination of rehabilitation and job training programs in prison, under the thoughtless and dishonest “tough on crime” banner, and few offer any medical care or psychiatric counseling for prisoners. Therapeutic treatment is especially important to consider given that jails and prisons collectively operate as the county’s largest housing facility for the mentally ill, and that countless prisoners, subject to abuse and sexual assault during their incarceration, leave with severe trauma.

Jackson provided three immediate policy initiatives state systems should adopt to make their criminal facilities more humane, reduce recidivism, and fully exercise the power and promise of democracy: Medical testing and treatment – most prisons, for example, test for sexually transmitted diseases when prisoners enter the facility, but not when they leave, Education and job training programs that offer instruction in marketable skills rather than the quasi-slave labor that currently passes for work in prison, and the return of the franchise to prisoners who have served their sentence. Rainbow/PUSH registered voters in the Cook County Jail on Christmas morning after Jackson reminded the crowd, “Until you are convicted, you can still register and you can still vote. You can vote for officials who will work to get you out of here.”

Jackson’s speech was reminiscent of a high powered rock and roll song with mid tempo verses and rapid fire, anthemic choruses. In an exhibition of his oratorical range, he would consistently transition from the dry, but essential political substance of public policy analysis to the gospel populism of his classic refrain, “I am somebody.”

“I may be poor, but I am somebody! I may be locked up, but I am somebody!” With each recitation, the inmates would rise to their feet, raise their fists, and shout with the passion of their desire to go home on Christmas morning.

You also notice that most are young.

Taking survey of the crowd – the men in beige, and the women in blue, many of them with unkempt hair, and a hungry look in their eyes – I thought of how each person has a story. There is a rich and deep human experience behind every inmate number and filing, and it is only through exploring all of the cracks and crevices of those experiences that comprehension of crime, and awareness of justice and injustice, become possible. I have written four books, teach at a university, and am happily married, but I’m far from above speculation that with just a few different shakes and circumstances in my life – many of which would have been outside my control – I could have been sitting among the inmates, waiting to hear Jesse Jackson speak before returning to my cell, rather than documenting the event in the role of journalist.

The immediate impact of Jackson’s visit was to achieve the precise humanization that emanates from empathy. Jackson himself is no stranger to the criminal justice system. He was arrested in the 1960s for attempting to check a book out of the “white” public library in his hometown of Greenville, South Carolina, and has spent time in jail repeatedly for similar acts of civil disobedience. While many of the choices of the Cook County inmates might not boast the same nobility or efficacy, one has to wonder how many people in a room full of nonviolent offenders can and should claim, for reasons personal or political, “I do not belong here.”

The Rainbow/PUSH Coalition identified three particular inmates who could amplify that declaration, and paid their respective bonds before escorting them home to spend Christmas with their families.

One was a woman in her thirties, a mother of four, including her oldest daughter who is a journalism major at DePaul University, locked away on charges of retail theft. Another was a young man, among many, on charges of simple drug possession, underscoring the human damage and debris of the impractical and iniquitous “war on drugs,” and the third was a middle aged, impoverished man who, because he could not make bail and was still awaiting trial, had spent 574 days in Cook County Jail on, of all things, a forgery charge.

Before leaving, PUSH staffers recorded the names of all inmates enduring similar predicaments on the promise that they would research their cases, and coordinate with the Sheriff’s department to negotiate bond reduction, or secure release.

“The movement needs to go national,” Jackson told the assembled members of the press, “In every major city, in every state, we need to use Christmas as an opportunity to set the captives free.”

A simple act of seasonal compassion might reverberate with revolutionary resonance. The three inmates could express nothing but joy and gratitude for their homecoming. In addition to the multiplication of individual and familial happiness, as more people hug their children, parents, spouses, and siblings on a cold morning, setting the captives free can also spotlight the devastation of mass incarceration, racial and class biases in criminal justice, and the immorality of modern day debt prisons. The Christmas work of Jesse Jackson and Rainbow/PUSH is a replacement of American cruelty and indifference with the universal values of mercy, forgiveness, and the undying faith in the potential miracle of the second chance.

When Jackson and his staff returned to the PUSH offices in the South Side of Chicago, Jackson collapsed his 6’4” frame into a reclining chair at the head of a conference table. With CNN flashing images of the day’s news above his head, and local and national newspapers scattered before him, he made an admission as introspective as it was philosophical.

“I’ve freed hostages and prisoners in Iraq, Cuba, Syria, Kosovo, and Gambia,” he said in a soft voice far removed from the shout he employed at the pulpit just moments earlier, “and it never hit me as deep as releasing people at home.”