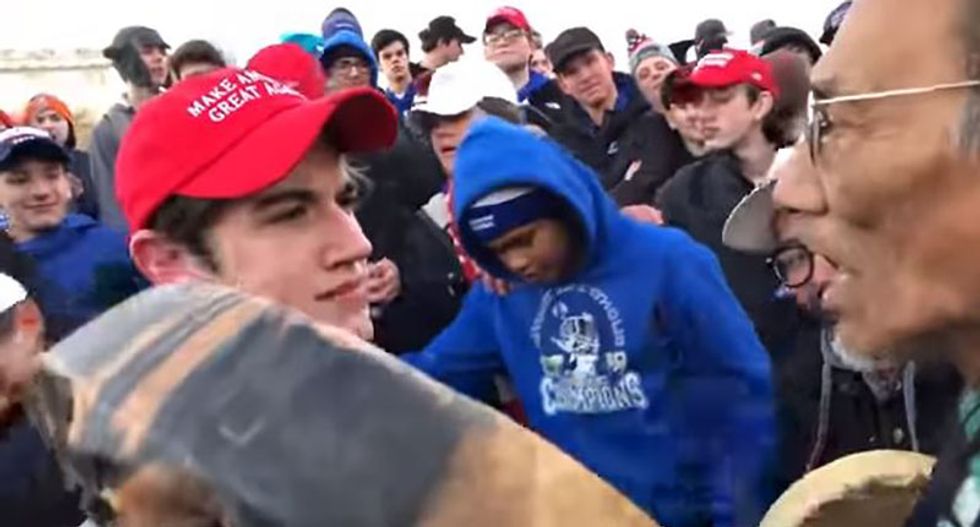 Some high school young men from a private Catholic school in Kentucky had been encouraged to attend an anti-abortion “March for Life” near the Lincoln Memorial in Washington D.C. on Friday. Nearby, Native Americans were rallying for their rights.

They then mocked and taunted him, doing a bad sing-along of his chant, and then one of the teens, an unbearably smug look on his face, planted himself in Phillips’s way and trapped him in the ugly crown of Mean Boys. They were chanting “Build the Wall.”

Covington High School and the Diocese of Covington in Kentucky have condemned the boys’ behavior.

Nathan Phillips gave a chilling interview about the incident to CNN, in which he expressed fear about where the United States is going. Remember, Phillips risked his life for a country that had treated his people like crap, stealing their land, putting them on reservations, forbidding them to practice their religion, and occasionally massacring them.

The teen’s smug look no doubt was worn by those thugs who ordered the Trail of Tears, when Native Americans were expelled from the Southeast.

Hannah Arendt spoke of the banality of evil, of the way in which boring routine bureaucracy had been deployed by the Nazis to commit unspeakable crimes against humanity.

What struck me from looking at those young men was that she could have perhaps even more usefully spoken of the stupidity of evil.

How stupid do you have to be to chant “build the wall” at a Native American whose people were here at least 13,000 years ago before the European undocumented migrants showed up in their lands?

How stupid do you have to be to chant “build the wall” at African-Americans whom white slavers kidnapped from their homes in Senegal and Nigeria and Angola and transported here against their will?

How stupid do you have to be as a Catholic not to know that anti-immigrant slogans like “Build the Wall” and “Make America Great Again” are the descendants of the racist slogans (such as “Keep America American”) that white Protestants of the 19th century ‘Know Nothing’ secret society chanted at Catholic immigrants from Ireland and Italy and Germany just before they burned down Catholic churches?

How stupid do you have to be to insist on a fetus’s right to life but to endanger the life of an elderly Vet by putting him into a bottleneck in the midst of an angry mob?

How stupid do you have to be to think that “Make America Great Again” could possibly mean anything when chanted by chickenhawk young men at a Vet who risked his life for this country?

How stupid do you have to be not to realize that the people Trump wants to keep out of the United States by building his idiotic, cruel and ineffective wall are for the most part Catholics?

Nathan Phillips said he is afraid for where the country of going because of the wave of hatefulness sweeping the country.

He is too polite to blame Trump for our collective national two minutes hate, but I’m not. This incident was Trump’s fault.

Mean boys in high school acting out evil may be a bit banal as well. But if Nathan Phillips is apparently afraid that hatred is contagious, I am afraid that stupidity might be an infectious disease.

PS One of the students involved has issued this statement. I do not find it persuasive. Neither his actual expression nor the clearly mocking tone of his colleagues is explained by it. The people I see in the videos above are acting stupidly. However, these denials are noted for the record.