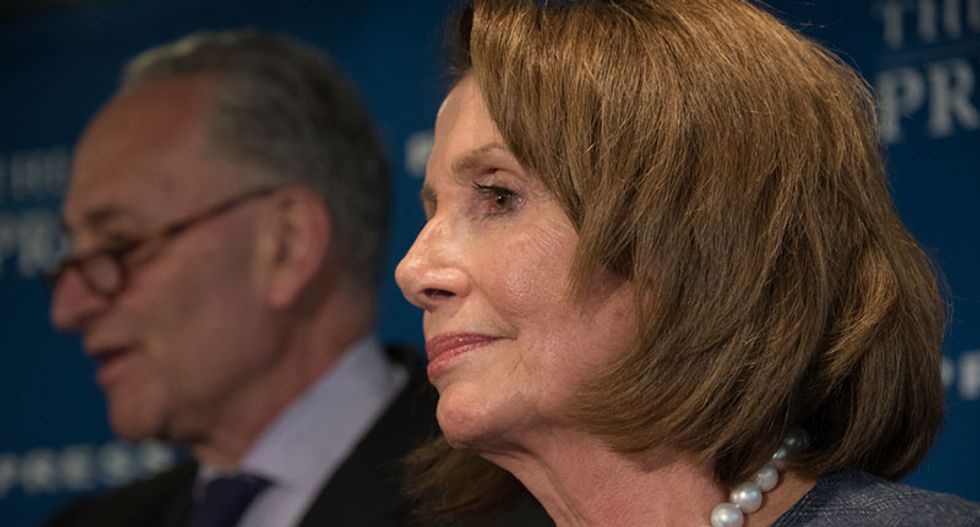 President Donald J. Trump has come up with an abundance of childish names for those he wishes to insult, from “Crooked Hillary” for former Secretary of State Hillary Clinton to “Lying Ted” for Sen. Ted Cruz to “Little Rocket Man” for North Korean dictator Kim Jong Un. But one political figure the president hasn’t come up with an insulting name for—not yet, anyway—is House Speaker Nancy Pelosi; instead, he refers to her as simply “Nancy.” At CNN, Don Lemon has asserted that Trump refers to Pelosi as “Nancy” rather than “House Speaker Pelosi” in order to “demean” her. But Trump respects power. The president has clearly met his match in the 78-year-old Pelosi, and as strange as it sounds, Trump probably has a lot more respect for the Democratic House speaker than he has for sycophants like Fox News’ Sean Hannity.

Trump is as much of a bully as he is a narcissist, and bullies love to intimidate. But one person Trump obviously doesn’t intimidate is Pelosi. Throughout the partial shutdown of the U.S. federal government that, thanks to Trump, has been going on for five weeks, Pelosi has made it abundantly clear that she will not be bullied or coerced into funding his proposed U.S./Mexico border wall. And she has demonstrated her willingness to play hardball with the president, canceling the State of the Union address that was planned for this Tuesday, January 29 and citing security concerns as the reason. Pelosi has remained firm in her assertion that if he would like to give his State of the Union address on the House floor, he will need to reopen the federal government at once.

Security concerns are no joke. In Washington, DC, the Capitol Building (home of the House floor) is located about a mile from the White House (where Trump lives and works). And when a president needs to get from the White House to the Capitol Building, a great deal of well-armed security is needed—security that is being burdoned by the shutdown Trump has brought about. Pelosi is well within her right to stress that with the federal government partially shut down for over a month, going ahead with Trump’s State of the Union address on the House floor on January 29 would be burdensome and risky from a security standpoint.

Trump has alienated and insulted many of the people who were once part of his administration, from former Attorney General Jeff Sessions to former Secretary of State Rex Tillerson. But Pelosi isn’t someone Trump has the option of firing; he’s stuck with her whether he likes it or not. And he respects power a lot more than he respects sycophants, which is what Hannity is.

To right-wing ideologues who live in the Fox News/AM talk radio bubble, the assertion that Trump probably respects Pelosi a lot more than he respects Hannity might sound ridiculous. Hannity, after all, is a giant in the right-wing media. But according to a Daily Beast article published on November 15, “Donald Trump’s close relationship—on air and off—with Sean Hannity hasn’t stopped the president from mocking the Fox News star behind his back for being such a suck-up.” The Daily Beast interviewed three anonymous people who said that during their private conservations with Trump, the president found Hannity’s obsequiousness to be pathetic.

Reporters Asawin Suebsaeng and Lachlan Cartwright wrote, “Trump has repeatedly—and sometimes for a sustained period of time—made fun of Hannity’s interviewing skills, usually zeroing in on the low-quality laziness of the host’s questions, the three people with direct knowledge tell The Daily Beast.”

Trump, according to one of the Daily Beast’s sources, found Hannity’s questions “dumb.”

For a president who thrives on conflict and nonstop drama, sycophants are ultimately boring—and while Trump might like Hannity as a person, that doesn’t mean he respects him. But with Pelosi, Trump not only has an adversary who doesn’t back down—he has an adversary in an important position who he cannot fire, dismiss or demote.

In a November 7 tweet, Trump posted, “In all fairness, Nancy Pelosi deserves to be chosen Speaker of the House by the Democrats. If they give her a hard time, perhaps we will add some Republican votes. She has earned this great honor!”

By Trump standards, that tweet was surprisingly respectful. And it set the tone for the post-midterms relationship he has had with Pelosi. When the House speaker canceled Trump’s State of the Union address, his tone was one of melancholy more than lashing out. It was almost as if he were saying, “Nancy, I thought we were friends.”

The partial government shutdown has brought considerable pain to tens of thousands of government workers. But for Trump, being engaged in a tug of war with a strong-minded adversary like Pelosi is fun and exciting—much more exciting than the obsequious and pathetic fawning of Sean Hannity.