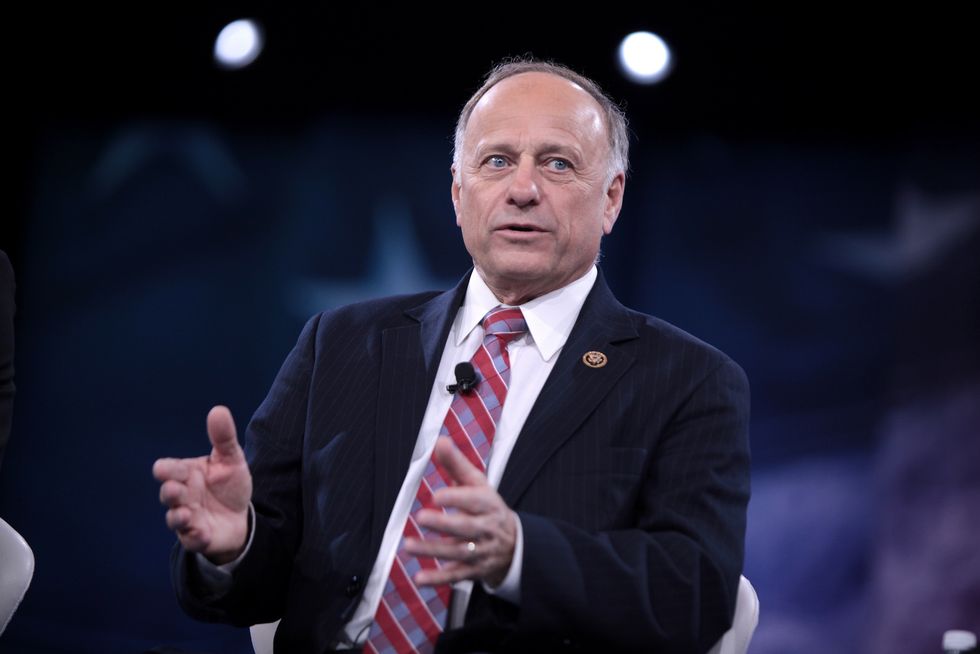 Some GOP lawmakers condemned the remarks shortly after they were made, notably South Carolina's Sen. Tim Scott and Iowa's Sen. Joni Ernst. And on Monday, Senate Majority Leader Mitch McConnell added his voice to those denouncing King.

“I have no tolerance for such positions and those who espouse these views are not supporters of American ideals and freedoms,” McConnell told The Washington Post. “Rep. King’s statements are unwelcome and unworthy of his elected position. If he doesn’t understand why ‘white supremacy’ is offensive, he should find another line of work.”

A naive person might think that this response is a sign that the GOP actually cares about addressing racism in its ranks. But it's not.

As my colleague Matthew Chapman has explained King's white supremacist ideology has long been evident in his public comments:

He said that most young Mexican-Americans are drug mules with "calves the size of cantaloupes." He called a Hispanic woman that former First Lady Michelle Obama brought to a State of the Union address a "deportable." He has said that "diversity is not our strength," and that America should be more racially "homogenous" because "we can't restore our civilization with somebody else's babies." He said the Blacks and Hispanics "will be fighting each other" before they overtake whites in population. He recommended people read The Camp of the Saints, a racist 1973 novel in which a feces-eating warlord conquers Europe with a horde of nonwhite invaders. He has routinely shared content from white supremacist politicians around the world, including from a British neo-Nazi, and endorsed a white nationalist candidate for mayor of Toronto.

Perhaps King's vilest moment, however — and likely the one that got Stivers' attention — was the recent incident in which King flew to Europe on a trip paid for by a Holocaust remembrance group, and gave an interview to a far-right Austrian political party founded by a Nazi SS officer.

All the while, the Republican Party sat around and did next to nothing.

In fact, some conservative commentators, like Ben Shapiro of The Daily Wire, did much more than nothing. When King was previously called out by media observers for past racist comments, Shapiro attacked King's critics and called them liars. With King's most recent statement, Shapiro has backtracked, attaching a note to his old article defending King and saying that maybe the critics were right after all.

It is clear what's going on here. King is an unrepentant racist, and he has governed as one. As the Times documented in the piece that was the source of the recent controversy, King celebrated anti-imigrant polices and a border wall long before President Donald Trump took up the mantle.

The Republican Party didn't mind King being a racist then. They don't mind Trump being a racist now. What they do mind is if if one of their allies crosses the line and becomes too explicitly racist.

This is because the Republican Party is built on a movement that derives much of its appeal from white supremacy and bigotry toward immigrants. But it knows that it can't be solely built on this well of animus in society — they also need the hardline Christian conservatives, business interests, wealthy donors, and some portion of right-leaning suburbanites that can comprise a winning coalition. Too much explicit racism risks alienating some members of these other groups.

When Trump entered to 2016 presidential race as a Republican, Republicans clearly feared this possibility. That's why in 2015, GOP Sen. Lindsey Graham (SC) said that Trump was a "race-baiting xenophobic bigot."

But then, what no one thought would happen happened. Trump won. Having proved he was electorally viable — and not only that, popular among party members — Graham changed his tune on Trump, saying he has "never heard him make a single racist statement."

King is much less important to the GOP's political power than Trump is, and apparently, he has now crossed the line from plain bigotry into indefensible bigotry. So some Republicans are making a show of distancing themselves from him, out of the likely rational decision that risking an Iowa House seat is better than failing to address King's comments.

But it's not a principled stand. They don't object to his bigotry. They just wish he'd be quieter about it.