Fox News' Chris Wallace fact-checks Sarah Sanders on terrorists and the wall: 'They’re not coming across the southern border!' 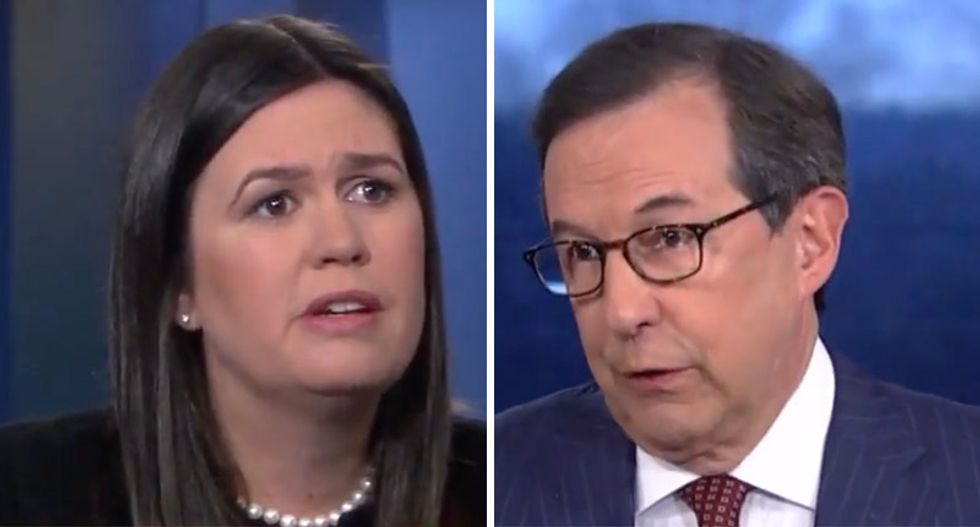 During an interview on Fox News Sunday, Sanders asserted that “roughly 4,000 known or suspected terrorist come into our country illegally and we know that our most vulnerable point of entry is at our southern border.”

“Wait, wait, wait,” Wallace interrupted. “I know this statistic. I didn’t know you were going to use it, but I studied up on this. Do you know where those 4,000 people — where they are captured? Airports!”

“The State Department says there hasn’t been any terrorists that they’ve found coming across the southern border,” Wallace pointed out.

“But the one thing that you’re forgetting is the most vulnerable point of entry that we have is the southern border,” Sanders repeated.

“But they’re not coming across the southern border, Sarah!” Wallace scolded.

The Fox News host also pressed Sanders about a claim that the president can build a wall on the southern border without authorization from Congress.

“How serious is he about that?” Wallace asked. “Has the White House drafted an emergency border — a resolution that he could announce tomorrow we are declaring a national emergency, we are going to build a wall? Has he set a deadline for when his going to end talks and simply say I’m going to go off on my own and do it?”

“Three,” Wallace said, adding, “It’s all the same question. How serious is he? Is he really prepared go off on his own and use money that was authorized for military construction and building wall instead?”

“The president is prepared to do what it takes to protect our borders, protect the people of this country,” Sanders remarked.