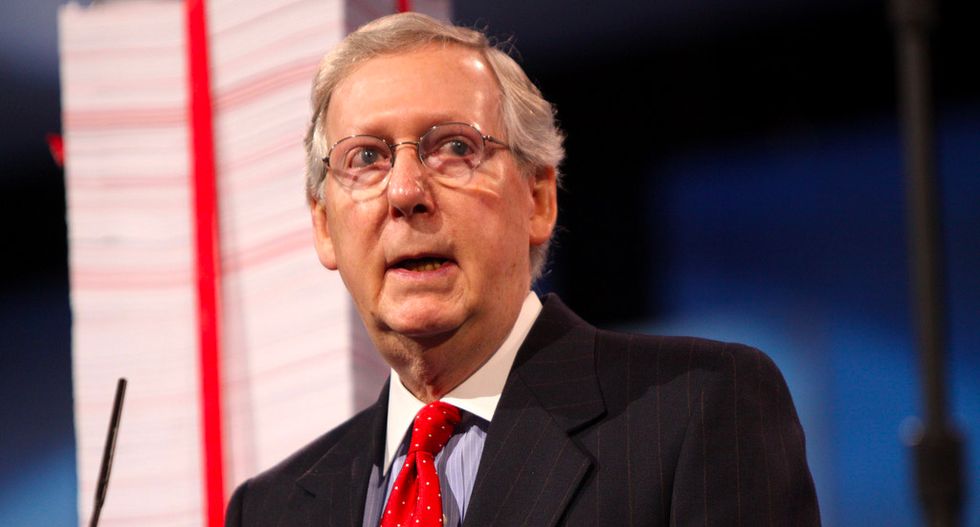 Police in Lexington, Kentucky were called to an anti-shutdown protest today outside the office of Senate Majority Leader Mitch McConnell. The protest was organized by the American Federation of Government Employees and consisted of federal workers who were hoping to give some shutdown-related letters to McConnell’s staff.

Meanwhile, a video posted by journalist Mike Viqueira on Twitter showed demonstrators being arrested at a separate anti-shutdown protest today outside of McConnell’s Washington, DC office—where furloughed workers chanted, “We need a paycheck” and “where is Mitch?”

Chon Jung, one of the organizers of the Lexington protest, told reporters that it was a “peaceful protest”—although some of the protestors banged on the windows of McConnell’s office. The Associate Press reports that according to Brenna Angel (a police spokeswoman in Lexington) about 50 protestors and members of the media left without incident. McConnell himself was not in Lexington during the January 23 protest, but was in Washington, DC.

The federal government has been partially shut down for more than a month, and President Donald Trump has declared that he will keep the shutdown going for months or “even years” if Congress does not provide $5.7 billion in funding for a U.S./Mexico border wall. The Democrat-controlled House of Representatives has passed spending bills that would reopen the government immediately, but minus funding for a wall.

The Senate, where Republicans slightly increased their majority in the 2018 midterms, is scheduled to vote on two bills on Thursday. One is a short-term spending bill that would reopen the government until February 8, while the other reflects the so-called “compromise” that Trump offered over the weekend: funding for DACA  (Deferred Action on Childhood Arrivals) in exchange for funding for a border wall.

The American Federation of Government Employees, in an official statement, said it organized the Lexington protest to “highlight the effect this shutdown is having on our members, their families and the nation.”

One of about a dozen protesters at McConnell’s office to be taken away by police. https://t.co/LEU5DJujmX
— michael viqueira (@michael viqueira) 1548269996.0