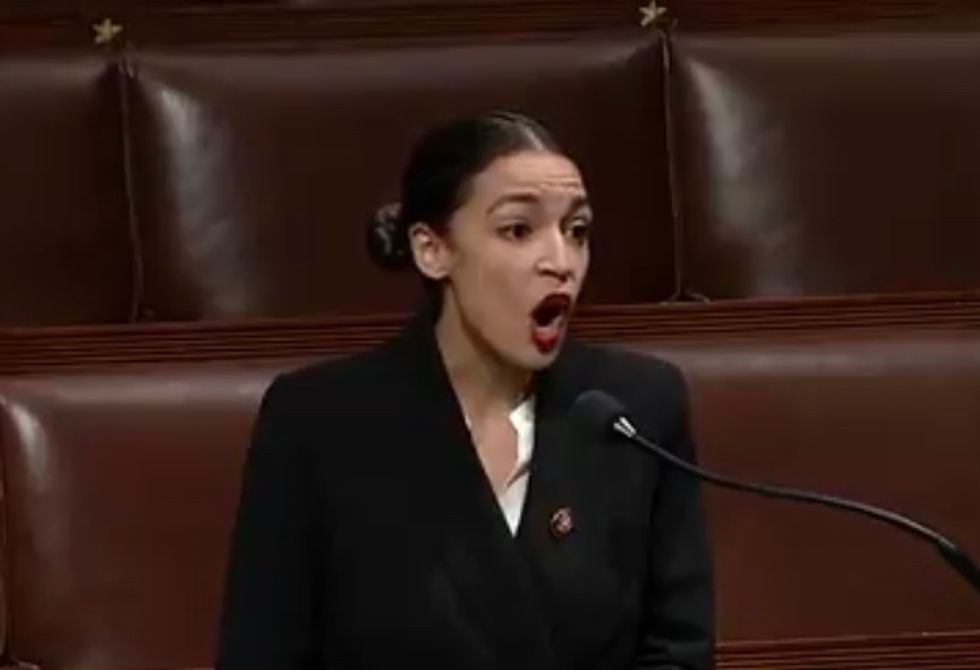 President Donald Trump's government shutdown is approaching a month long as he continues to desperately hold out for his unpopular border wall, and Senate Majority Leader Mitch McConnell (R-KY) continues to block any bill that would reopen the government without funding for the project.

On Wednesday evening, freshman Rep. Alexandria Ocasio-Cortez (D-NY) took to the House floor for her first ever speech in the chamber — and gave a fiery condemnation of the GOP for holding 800,000 government workers hostage with no pay.

"Today I rise to tell the story of one of my constituents," she said. She described the struggle of a Yemeni immigrant and federal employee of 14 years, working as an air traffic control supervisor at New York's JFK Airport, who missed his paycheck last week due to the shutdown and has no way to pay his mortgage and provide for his two children.

"He was telling me about how stressful his job is," she continued. "Every single day, air traffic controllers have thousands of people's lives in their hands. With weather changes, flight delays, staffing complexities, and a myriad of other issues, their days almost never go exactly to plan. His job is to find solutions, analyze and adapt in real time to keep people safe in one of the busiest airspaces in the United States and the world. And it is terrifying to think that almost every single air traffic controller in the United States is currently distracted at work because they don't know when their next paycheck is coming."

This standoff, Ocasio-Cortez continued, "is actually not about a wall, it is not about the border, and it is certainly not about the well-being of everyday Americans. The truth is, this shutdown is about the erosion of American democracy and the subversion of our most basic governmental norms."

These remarks come after Ocasio-Cortez and several of her fellow freshman Democratic lawmakers demanded to speak with McConnell, accusing him of hiding to avoid blame for the shutdown.