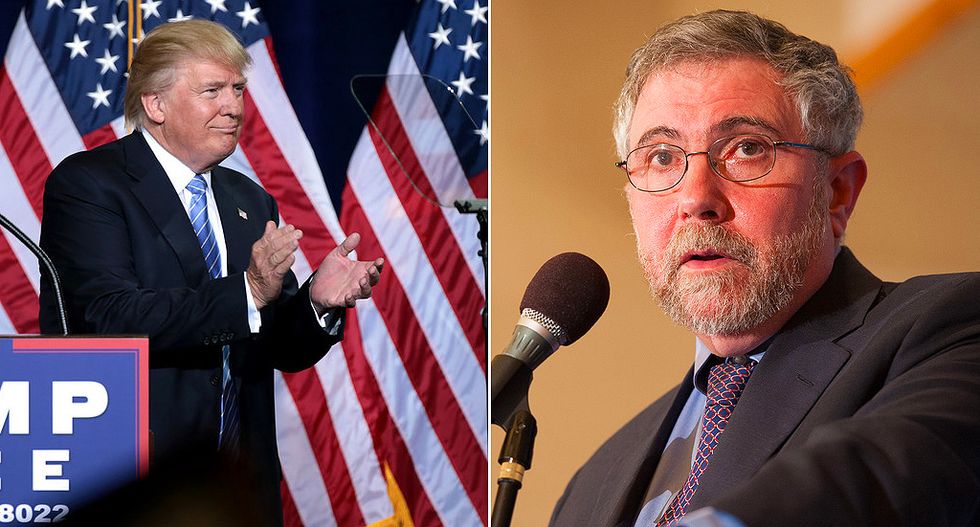 Some of President Donald Trump’s apologists on the right will argue that while he can be unorthodox and bombard the Internet with tweets that are petty and childish, one must never forget that he has been great for the U.S. economy. But Paul Krugman has a totally different perspective. And in his latest column for the New York Times, the veteran liberal economist explains why the U.S. economy will not be Trump’s saving grace—no matter how passionately his supporters claim that it will.

Delving into history, Krugman recalls that President Ronald Reagan, like Trump, had low approval ratings during the first two years of his presidency. But there is a key difference, Krugman stresses: Reagan faced a harsh recession back in 1981 and 1982, whereas the Great Recession was over by the time Trump was elected president in 2016.

“Where Reagan was unpopular because of a weak economy,” Krugman explains, “Trump is unpopular despite a strong economy. That is, he starts from a much lower baseline. And there is no chance of a ‘morning in America’-type boom over the next two years.”

When Krugman speaks of Reagan’s unpopularity, he is referring to the Reagan of 1981/1982—not the Reagan who had high approval ratings when he left office in January 1989. Democrats picked up an abundance of seats in Congress in the 1982 midterms, leading some pundits to believe that The Gipper would be voted out of office in 1984; of course, Reagan was reelected by a landslide, and Democrat Walter Mondale (former vice president under President Jimmy Carter) suffered an embarrassing defeat. But Trump, Krugman emphasizes, will be facing a totally different scenario in 2020.

“In 1983-84,” Krugman notes, “America was able to grow very fast by taking up the huge amount of economic slack that had accumulated over the course of the double-dip recession from 1979 to 1982. Right now, with unemployment below 4%, it’s not clear whether there’s any economic slack at all. There’s certainly not enough to allow the 7-plus-% growth rates in real personal income that prevailed in the run-up to the 1984 election.”

Krugman goes on to say that the GOP’s Tax Cuts and Jobs Act of 2017 won’t be Trump’s economic salvation either. The columnist asserts, “Wasn’t the tax cut supposed to increase long-run growth by increasing business investment? Yes, it was—but it isn’t delivering on that promise. Corporations received huge tax breaks, but they mostly used the money to pay higher dividends and buy back stocks, not for investment. And even the modest rise in business investment that did take place in 2018 seems to have been driven by higher oil prices, not tax cuts. So Donald Trump is no Ronald Reagan.”

Krugman concludes his column by stressing that Trump’s low approval ratings are unlikely to increase significantly between now and 2020. The economist writes, “Combine this lack of a strong economic upside over the next two years with Trump’s extreme current unpopularity, and his chances for re-election—if he even makes it to the end of his first term—don’t look too good…..Trump and his allies are in a deep hole right now—and the economy isn’t going to dig them out of it.”