Conservative columnist 'disturbed' by Trump taking possession of notes from Putin meeting: 'History needs to know what was said' 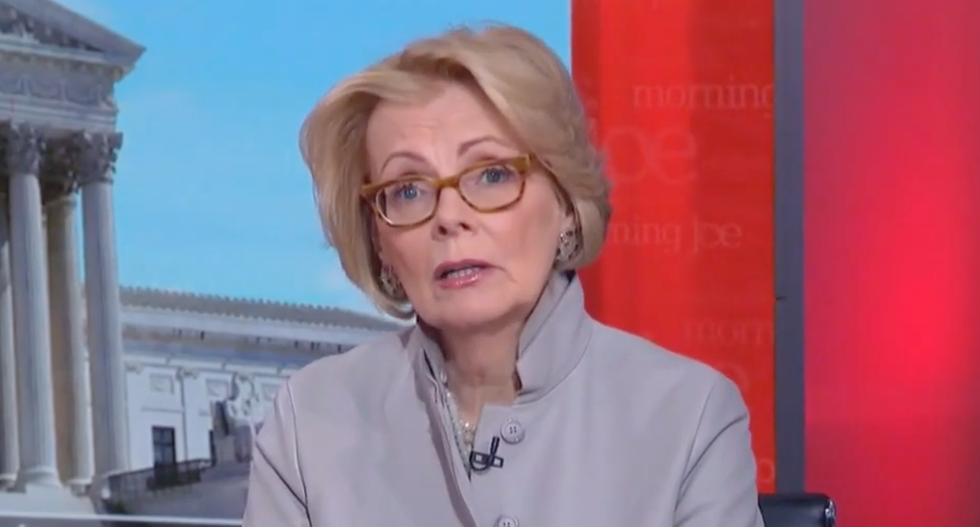 Donald Trump has met with Russian President Vladimir Putin in person on five separate occasions since becoming president, making it clear that he doesn’t consider post-communist Russia an adversary of the United States. And former Reagan speechwriter Peggy Noonan voiced strong concerns about Trump’s relationship with Putin during a January 17 appearance on MSNBC’s “Morning Joe.”

The Washington Post has reported that when Trump met with Putin in Hamburg, German in 2017, he kept the interpreter’s notes. Addressing “Morning Joe” hosts Joe Scarborough and Mika Brzezinski as well as fellow guests who included journalist Mike Barnacle and the New York Times’ Peter Baker, the conservative Noonan joined Democrats in saying that those notes should be made public.

“History needs to know what was said,” Noonan stressed.

Noonan noted that she was alarmed when she first “heard some indications” that “in some circumstances, no note-takers” were present at Trump/Putin meetings.

“It really disturbed me in many ways, one of which is: you take careful notes of such conversations between the leaders of two big nations at what is always a fraught time,” Noonan told the “Morning Joe” panel. “You do this for a number of reasons. One is: everybody has to review exactly what was said and exactly where we are—everybody around you who works for you.”

Noonan went on to say that when President John F. Kennedy met with Soviet Union leader Nikita Khrushchev in Geneva in the early 1960s during the Cold War, note-taking was crucial because those notes showed that their conservations “really didn’t go well. It was a really dangerous moment between the U.S. and the then-Soviet Union. I take this stuff seriously.”

The former Republican Party speechwriter added that Americans need to know, “What is the relationship between Donald Trump and Vladimir Putin? I hope we find out soon.”

Noonan, now 68, was one of the most influential conservatives of the 1980s. When President Ronald Reagan spoke of “morning in America” and “the city on the hill” in his speeches, those were Noonan’s words—and President George H.W. Bush’s famous “read my lips, no taxes” declaration during his 1988 GOP acceptance speech came from Noonan as well.

Despite MSNBC’s liberal leanings, Noonan has enjoyed a friendly relationship with the cable news network—not unlike columnist George Will and Washington Post columnist Jennifer Rubin, both of whom are among Trump’s biggest critics on the right. Scarborough himself is a Never Trump conservative and former Republican congressman.