Citizen Trump: The president shuns the arts – but increasingly resembles one of cinema’s greatest creations 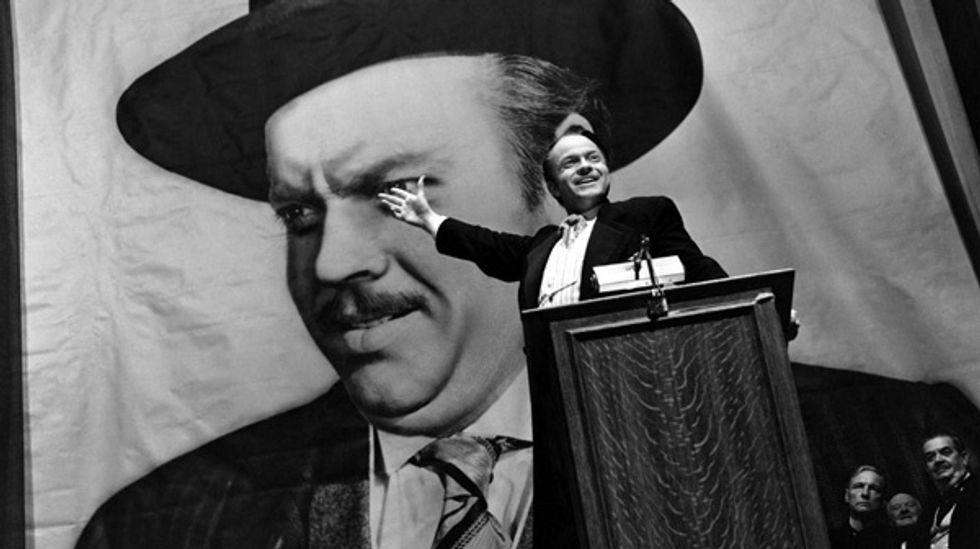 The Academy of Motion Picture Arts and Sciences will present ÒLinwood Dunn: Celebrating a Visual Effects Pioneer,Ó a program exploring the contributions of Linwood Dunn and the techniques he used in creating optical effects for Orson WellesÕs ÒCitizen Kane,Ó on Friday, October 9, at 8 p.m. at the Linwood Dunn Theater in Hollywood. The evening also will feature a screening of a newly struck print of ÒCitizen KaneÓ from the Academy Film Archive. This event is sold out, but standby tickets may become available. Pictured: Orson Welles in scene from CITIZEN KANE, 1941.
The Conversation
January 28, 2019

The White House of Donald J Trump is a curiously inert place. For most other presidents, active engagement with culture and the arts has been a means of presenting a more human image to the American public.

Indeed, the celebration and promotion of American popular culture has been an integral part of most recent administrations. Nixon accompanied the singer Pearl Bailey on piano; Dizzy Gillespie brought jazz to the Carter White House; Fleetwood Mac reformed to play at Bill Clinton’s inaugural; James Brown took it to the bridge for George W Bush; and Obama’s time in office saw a veritable festival of stars perform for the president.

Trump, meanwhile, has so far hosted visits (but not performances) from two right-wing rock stars, Kid Rock and Ted Nugent, and enjoyed a Kanye West rant in the Oval Office.

As well as musicians, writers, academics, filmmakers and artists have been regular guests of previous administrations, while many presidents have actively engaged with comedians at the annual White House Correspondents Dinner since 1921. Trump, however, has declined to attend any during his tenure in office. (His famous roasting by Barack Obama at the 2011 event forms part of the extreme animus he holds for the former president.)

In fact, Trump seems to be unmoved by any form of culture. This was clearly displayed in Paris at the Bastille Day performance of a Daft Punk medley by a French army band in 2017. The amazing precision of both the playing and movement of the band resulted in joyous whoops and clapping from members of the French government and armed forces, whilst Trump sat with his arms folded, bored and tetchy. It seemed to be an utter mystery to him.

Since his election in 2016, the White House has been without any sense of cultural activity or appreciation. This disconnection with the arts is an alarming aspect of Trump’s character.

He rarely makes any reference to popular culture apart from boasting about the viewing figures for his former reality TV show The Apprentice. Mass entertainment platforms have previously been used to promote his own brand, with appearances as himself in Home Alone 2, Zoolander and Sex and the City, and TV commercials for Pizza Hut and McDonald. But we know little about his actual tastes.

In interviews published in the book Trump Nation: The Art Of Being The Donald, there are moments where Trump expounds on his favourite music (The Beatles) and film (Citizen Kane). These are choices that display a familiar Trump trope: associating himself with whatever is regarded as the biggest and the best.

Choosing Citizen Kane is particularly fascinating in the context of the ongoing (at the time of writing) government shutdown which has seen Trump become ever more Kane-like – but perhaps not in a way he would have wanted.

The parallels between Charles Foster Kane and Donald J Trump have often been documented. Both Kane and Trump inherit their wealth, they do not earn it themselves. Kane is a purveyor of fake news, not via Twitter but by his extensive yellow press empire. Both are hounded by sex scandals – Kane has his political career ruined by one, Trump has (so far) survived several.

Trump himself has commented on Citizen Kane’s character, saying: “[Kane] is about accumulation … and it’s not necessarily all positive … he had the wealth but he didn’t have the happiness.”

Such comments could be taken as being insightful, even revealing a degree of self-reflection. But Trump’s delivery of these words implies something else – Kane couldn’t handle it, but I can.

In fact, Trump’s analysis leaves one to wonder if he has actually watched the entire film. Rumours of the president’s short attention span make it hard to imagine him getting through an entire Looney Tunes cartoon without losing interest, let alone a two-hour black and white movie.

His lack of context about the film is made clear when he expounds on the meaning of “Rosebud”, claiming it is “maybe the most significant word in film”. He says nothing about the film being a critical portrait of another businessman, William Randolph Hearst, the tyrannical media mogul.

Hearst was incensed by Welles’s thinly veiled attack on him, and mobilised all the might of his media outlets in an attempt to close down the release of Citizen Kane in 1941. Hearst’s hatred of the film and its maker centred on the word Rosebud – it was, some say, the pet name he gave to the clitoris of his lover, film star Marion Davies. Trump appears oblivious to this.

Although Trump seems to lack any understanding of the film (it is a critique, not a celebration of power) it is impossible not to be reminded of it as the government shutdown of recent weeks has dragged on. Trump has retreated to the White House, often alone but tweeting incessantly and self-pityingly. On Christmas Eve he tweeted: “I am all alone (poor me) in the White House.”

It’s a stark reminder of Kane and the famous scenes of his nocturnal angry ramblings around his deserted palace of Xanadu. This time, in real life, it’s Trump, forlornly trundling around the empty corridors of a darkened White House, faintly illuminated by the flickering blue light of Fox News on the television screens.