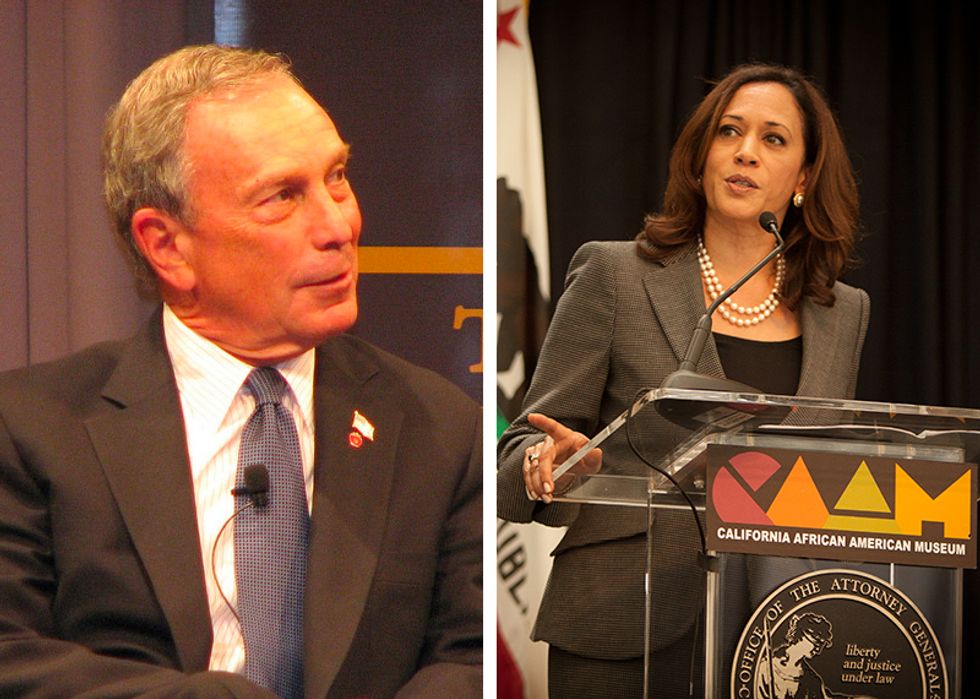 At a town hall event Monday night, Sen. Kamala Harris's (D-Calif.) unequivocal statement of support for a Medicare for All system which would do away with the for-profit health insurance industry won applause from the audience and universal healthcare advocates around the country, as the senator and 2020 presidential candidate backed the plan that 70 percent of Americans now support.

"We need to have Medicare for All, that's just the bottom line," Harris told an audience member who asked about the issue, adding that healthcare "should be understood to be something that all people are entitled to so that they can live a productive life, so that they can have dignity."

Harris was undeterred by a follow-up question from CNN host Jake Tapper, who asked whether she meant that the private health insurance sector should be done away with as the government takes responsibility for delivering healthcare to Americans.

"Listen, the idea is that everyone gets access to medical care," she replied, making clear that she fully supports the proposal put forward by Sen. Bernie Sanders (I-Vt.) rather than attempting to prop up the private insurance industry while offering a public option. "Who of us has not had that situation where you've got to wait for approval and the doctor says, 'Well, I don’t know if your insurance company is going to cover this'? Let's eliminate all of that, let's move on."

Calling for Medicare for All, Kamala Harris says of private insurance: ”Let’s eliminate all of that. Let’s move on.” https://t.co/xT2I5IZDfT
— Shane Goldmacher (@Shane Goldmacher) 1548732770.0

National Nurses United (NNU) executive director Bonnie Castillo was among the prominent progressives who praised Harris's statement, noting that Medicare for All advocates will demand similar commitments from other Democrats running for president and all elected officials.

Harris's remarks come days ahead of a National Week of Action organized by NNU, during which Medicare for All supporters around the country will host barnstorming events, plan phone-banking and canvassing sessions, and connect with other advocates in their communities.

But in addition to supporters, Harris's comments also caught the attention of former New York Mayor Michael Bloomberg, who criticized the 2020 contenders who have backed Medicare for All by claiming the plan would be unaffordable for the United States.

"You can have Medicare for All for people that are uncovered, because that's a smaller group," said Bloomberg incongruously. "But to replace the entire private system where companies provide healthcare for their employees," he added without citing evidence, "would bankrupt us for a very long time."

The billionaire media tycoon's message didn't go over particularly well with some:

The notion that the U.S., which spends about $600 billion per year to keep its military running and gave a $1.5 trillion tax cut to the wealthiest Americans as well as permanently cutting corporate taxes by 14 percent a year ago, is unable to afford a national healthcare system is familiar to advocates—but numerous recent studies from across the political spectrum have helped to debunk the claim.

In November, as Common Dreams reported at the time, the Political Economy Research Institute (PERI) at the University of Massachusetts released a major study showing that in its first decade, a Medicare for All system would save  $5.1 trillion in overall healthcare spending. That number, the study explained, does not even account for "broader macroeconomic benefits such as increased productivity, greater income equality, and net job creation through lower operating costs for small- and medium-sized businesses."

PERI's report echoed the findings of the Mercatus Institute, a think tank that receives funding from the Koch Brothers and which reported in a study last summer that a single-payer system like the one proposed by Sen. Bernie Sanders (I-Vt.) would cost $32.6 trillion over the next decade—saving $2 trillion in national healthcare expenditures based on projections of how much the current system would cost over the same 10 years.

"For every one dollar increase in taxes" that would help to fund the new system, Gaffney said, "we're talking about more savings through getting rid of premiums, copays, and deductibles. So overall people would do better, and more importantly they would never need to worry about not getting the care that they need."